Do transcripts always start and end with exons?

I realized that in all cases of "RefSeq Genes" annotations of hg19 I looked at spliced transcripts start (and end) with an exon. From the annotation there is no evidence of any sequence upstream or downstream of these exons that remain in the nascent RNA.

Does this reflect the biology or is it just a consequence of the spliced read mapping? In other words: Do transcribed regions upstream of the first exon and downstream of the last exon exist in nascent RNA?

These regions, if they exist, cannot be called introns when those are defines as 'spliced sequences between exons'. How would one call them?

Most (almost all, AFAIK) mRNAs and lncRNAs start with exons for the reasons already mentioned by David. In a typical splicing event, the nucleotide that is 5' to the splice donor site (lets call it pre-donor) and the one that is 3' to the acceptor site (lets call it post acceptor) are joined together and the intronic sequence between them is removed.

If you look carefully at the mechanism, you'll notice that the pre-donor (i.e. the 3' end of the first exon) renders a nucleophilic attack on the phosphorous of the post acceptor (i.e. the 5' end of the second exon) which leads to the release of the intron.

Therefore there is always an exon preceding an intron, in the transcript.

However, RNA processing can occur via a different mechanism in which the ends are just chopped off. This happens in tRNA processing, where RNAseP chops off a portion 5' to the mature tRNA region, called the leader sequence (see the figure below). I am not aware of such a mechanism happening in the case of mRNAs but a possibility certainly exists. One possible reason for mRNAs not having this kind of mechanism is because their 5' end is capped (co-transcriptionally) and cleavage of the 5' would lead to loss of cap and destabilization of the mRNA (all guesses, though). Similarly, the 3' of mRNAs is polyadenylated which also renders stability to them. Many lncRNAs are also capped and polyadenylated but there are exceptions (mRNAs too).

Since this mechanism is not very common, there is no systematic name for the excised ends. For the case of tRNA, it is simply called the "leader" sequence. 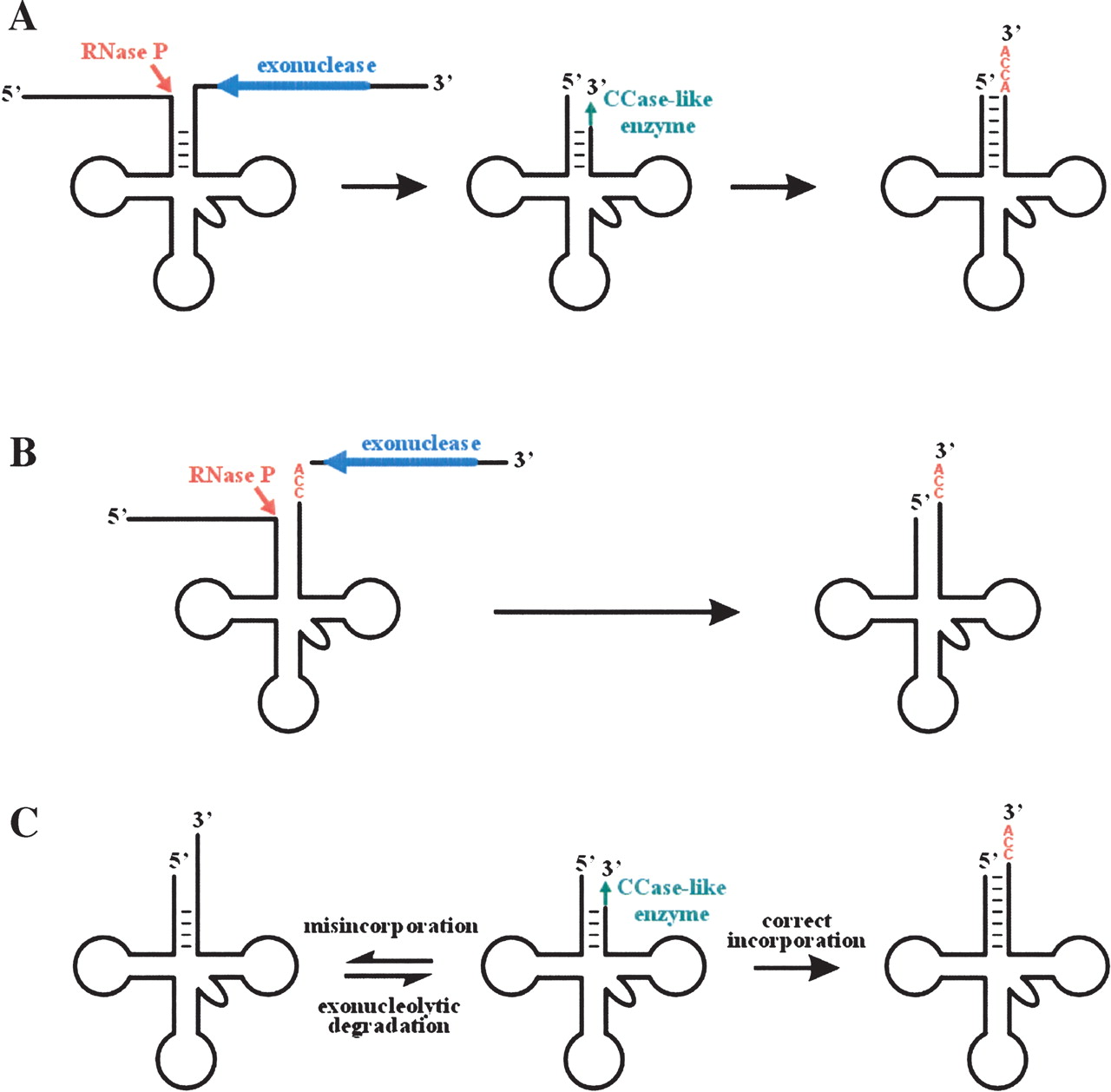 As far as I am aware, transcripts always start and end with exons. The reasons I wouldn’t expect otherwise (apart from my observations when examining Drosophila transcripts) are given below.

As you will be aware, the spliceosome (at least for mRNA) is a highly sophisticated multi-component ribonuclear protein complex, and has functions to both splice out the intron and ligate the ends of the exon. The diagram below, from a recent review, suggests that recognition of the splice sites also involves the exon. 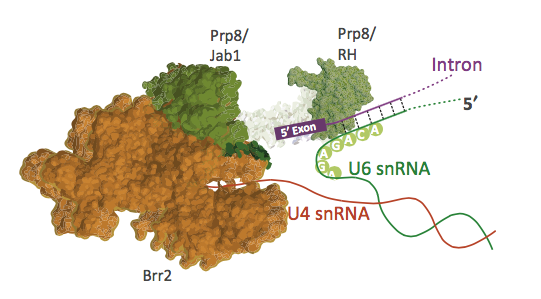 And the authors write (my italics):

So I think that the contemporary machinery for removing mRNA introns requires exon mRNA to ‘get hold of’.

If such removal of introns could serve a functional purpose you would imagine the machinery would have evolved to accomodate such situations, but if the main function of introns is to allow differential splicing of exons that specify regions of the protein, introns at the end of a mRNA would have no purpose.

Another point to consider is the RNA-polymerase binding site on the DNA (the extended and complex promotor). If introns arose originally as mobile elements (something suggested by the authors of the review) then an insertion at the 5' end would likely have inactivated the promotor, so no transcript would have been produced.

Of course, Nature is full of exceptions, and it would be foolish to exclude that introns of the type you postulate do exist (in some galaxy far away...).

Thank you for a great question.

I would like to start by clarifying some terminology.

First, nascent RNA refers to an RNA molecule that is currently being transcribed and has not been processed. Processing can include the splicing out of introns or polyadenylation at the 3' end, for example. Mature RNA is (typically) spliced and polyadenylated.

Second, the current consensus definition of an exon is a transcribed region of the genome whose sequence can be found in mature RNA species. Importantly, there are two classes of exons: non-coding exons, and protein-coding exons. I think you may have these confused and I have included an image to help clarify the distinction between introns, coding exons, and non-coding exons, using the human GAPDH gene as an example.

When you view the RefSeq annotation, you are viewing all exons (coding-and non-coding). For some of the genes, such as GAPDH, the first exon will be non-coding. Other genes may begin with a coding exon (I have yet to find one and since the 5'UTR is involved in ribosome binding, I am doubtful that many examples exist).

The regions of an mRNA molecule beyond its coding sequence are referred to as the 5' and 3' untranslated regions (UTRs).

I hope this helps answer your question.

Not the answer you're looking for? Browse other questions tagged molecular-genetics rna transcription splicing or ask your own question.

3
Detecting Introns and Exons
2
Collective term for both exons and introns
3
Why aren't introns found on the ends of pre-RNA?
3
Why are there both stop and start codons?
4
Stop codons and exons?
6
From which end of mRNA does transcription start?
4
What are an internal and external exons?
2
Why is an intron (or exon) still called intron (exon) if retained in (excluded from) mRNA?