How do mosquitoes orientate in the darkness?

An annoying mosquito (Culicidae) which kept me awake nearly the whole night lead me to this question.

I have heard that mosquitoes can smell CO2 which could help them to orientate in the darkness, but how do they avoid obstacles and know where to land? I was browsing the wikipedia article but did not see an explanation for this, can somebody explain this to me?

I also wonder about the purpose of their loud, annoying sound (afaik only females produce it), which i would think as an evolutinary disadvantage, but this would be another question...

What is the purpose of their loud, annoying sound?

Both males and females produce a sound when flying but not at the same frequency. I would think of the male sound as mainly an artefact of flying and don't really know if it has any usefulness. I would note though that before mating both gender tend to synchronize their sound (Gibson and Russel 2006). On the other hand males are very attracted toward the sound of females.

In nature, mosquitoes make swarms. Male's job in the swarm is find find female, courtship and mate. This means that males need a cue to detect them from far away and this cue is their sound. Males evolved large and fluffy antennas (with which they hear) while females only have small antennas Charlwood and Jones 2008. 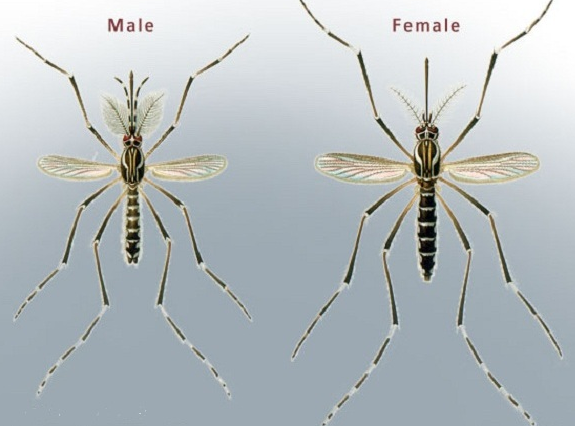 How do they avoid obstacles?

They have eyes! It is never complete darkness and they just move around, see things and sometime bump into something and keep flying until they reach their goal.

I can't offer you a citation for that but as I worked with mosquitoes in the past, I think it is a good description.

Not the answer you're looking for? Browse other questions tagged zoology entomology or ask your own question.

3
How exactly do mosquitoes navigate directly on target?

6
Why are mosquitoes repelled by smoke?
34
Can any animals photosynthesize?
4
How mosquitoes get their food and survive?
4
How many Amperes to kill fruit flies and mosquitoes?
15
Why do mosquitoes hover over our heads?
3
How exactly do mosquitoes navigate directly on target?