How do T-cells determine which cells they've already inspected?

From what I understand, T-cells are constantly traveling in the body, inspecting cells by looking for antigens. If they're self antigens, then the T-cell doesn't attack, whereas if they're non-self, they attack. My question is how does a T-cell know when it just inspected a cell? Does the T-cell leave something behind on the cell to mark it as checked or does the cell itself present something on its surface to indicate that it has just been checked? If there is no such system, then what prevents the T-cells from being stuck in a loop, and just inspecting the same cell over and over?

As you can see in the image below, there are many mechanisms for moving T-cells across the endothelial layer. 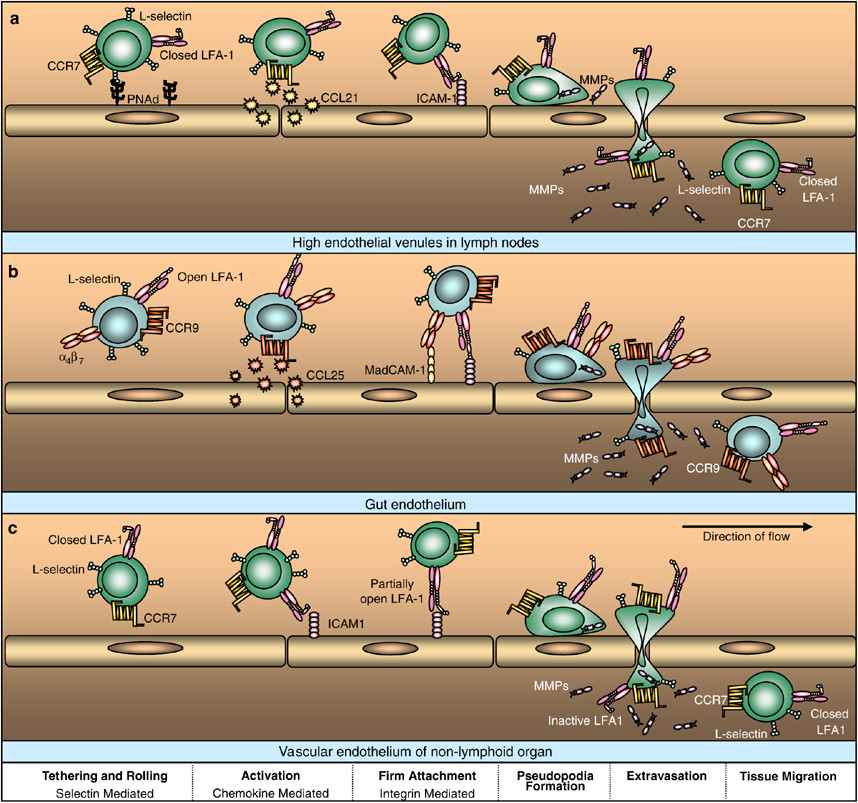 CCL21 is expressed by both stromal cells of lymph node paracortex and endothelium of lymphatic vessels to assist migration of activated dendritic cells and naive and central memory T-cells to lymph node respectively. Dendritic cells are professional antigen-presenting cells (APCs) that migrate to lymph node where it can interact with T-cells more efficiently.

One important concept to take away from T-cell activation is that there needs to be direct contact between MHC complex and T-cell receptor (TCR).

T-cells that have moved into the lymph node interact with dendritic cells, which have high MHC complex concentration on their cell surface. This leads to subsequent activation of the T-cell leading to release of cytokines such as IL-2 leading to proliferation of activated T-cells.

T-cell does not inspect any cell until the cell shows a piece of the "non-self" antigen on it by the MHC.

Not the answer you're looking for? Browse other questions tagged human-biology cell-biology immunology immune-system or ask your own question.

2
How T-Cell recognizes a cell infected by a virus?

6
what if there is a door for which our immune system has no key?
4
Autoimmunity - negative selection of T-cells - APC
1
Why are superantigens not "MHC-restricted", and what's the significance?
2
How T-Cell recognizes a cell infected by a virus?
3
Transplant rejection through direct allogenic antigen detection: where do the T cells come from?