Why do pink rain lilies flower only after rains, and not from being watered?

We have pink rain lilies (Zephyranthes carinata) in the garden. In my personal experience, I've found that they always flower, without exception, shortly after rains. However, there are roughly ten totally dry months each year. During this time, even though I water them regularly with well-water, they never flower. I've tried copious amounts of water, and frequent watering, but to no avail. They seem to depend on rain.

The rains here come at different times each year. We just had a totally unexpected rainstorm in May, causing them to flower. We are inland in southern India. It's very hot here, and the climate is quite dry in the periods when it's not raining.

How can this be? What's going on inside the plant, biologically speaking? How can it "know" whether it's getting rain water or well water? I'm looking for a description of the biological processes inside the plant which cause these different responses to rains versus watering.

Also, (minor, secondary point) is there any evolutionary reason why a plant would develop this trait?

I prefer answers that cite their sources for the information.

I live in central India which is marked by a heavy rainy season from mid June to September and almost dry rest of the year. This behavior of rain lilies has been a mystery to all of us for generations.

No matter what season, what temperature, the lily bush will give you at least one bloom even if rains for a mere few minutes. Rest of the time, any amount of watering does not help. I've seen the plant bloom with just a bit of drizzling in summers when temps cross 40 degrees celsius.

Whereas, a friend is growing them in a pot in a water lily pond. Basically, in shallow water where the rain lilies are just dipping their feet in water all the time. So basically, for a large portion of the year, the plant is meeting the low temperature, high water criterion. It doesn't work. The plants bloom only and only when it showers.

By the way, the behavior is not limited to pink rain lilies. It's the same with yellow and white lilies. 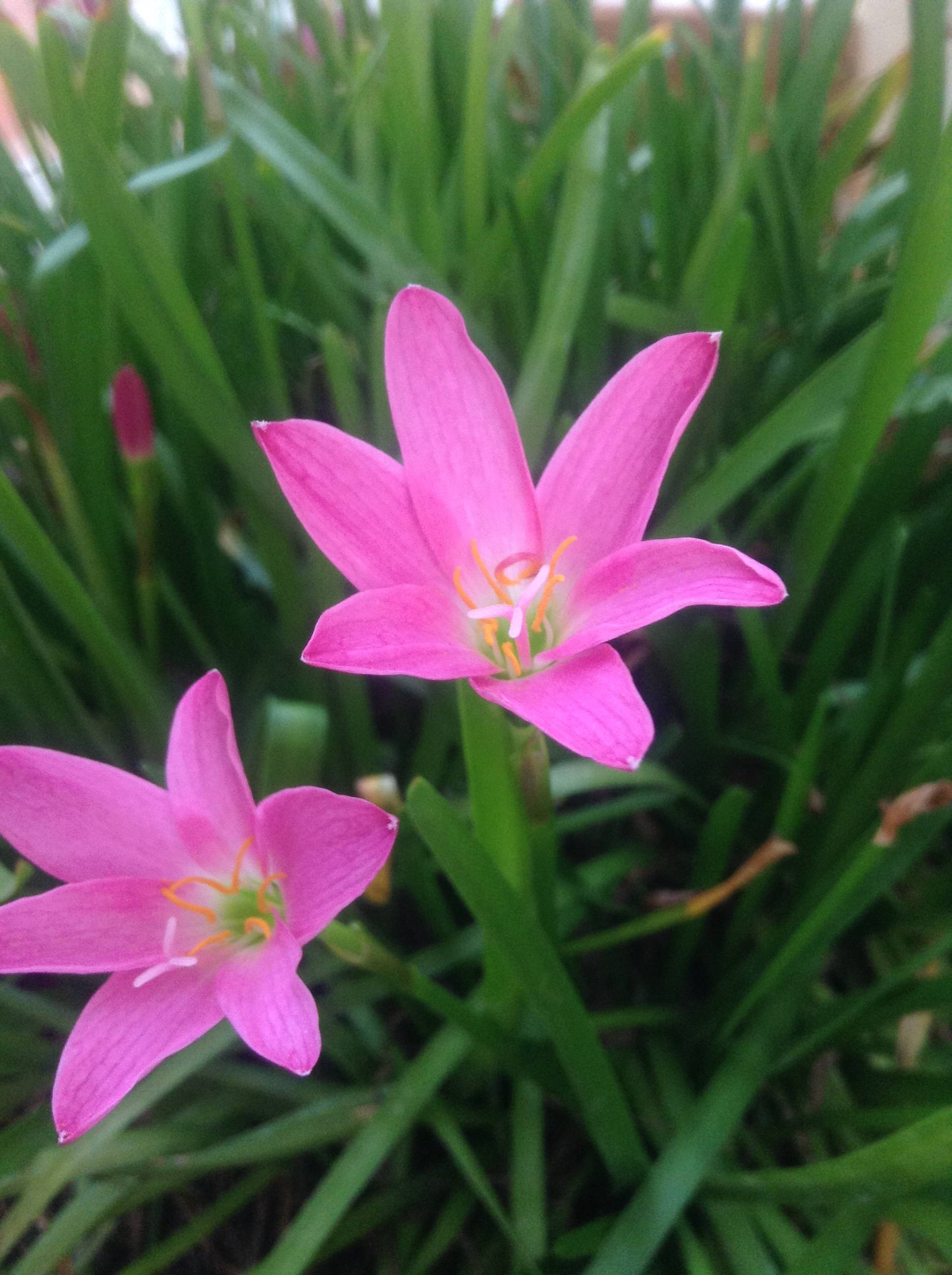 It looks like sustained or consistent moisture might be (at least part of) the phenological cue for flowering:

The wikipedia article mentions that consistent humidity will induce flowering in at least some species and cites Fernández-Alonso & Groenendijk (2004), which says:

It generally flowers after the rainy periods, but in humid pastures and under cultivation conditions, colonies show staggered flowering during the whole year.

There's a reference in Lange et al. 2013 to Zephyranthes flowering after "watering of at least 10 h[ours]", but I'm not able to find the original citation in the google books preview (which is given at "Nitsch 1965").

Edit: I tracked down Nitsch 1965, who cites 2 sources on the topic. He reports Kerling 1949 as showing that Zephyranthes rosea after a certain period of development goes into dormancy, which is broken when two conditions are met: low temperature and high water, which must be extended over at least 10 hrs. He adds that Holdsworth (1961) presents evidence showing that Zephyranthes citrina and Z. tubispatha are primarily triggered by soil moisture.

It's a nice question, I've tried looking for research papers to no avail. But I will add a few things that I hope will help:

Some of the resources aren't as reliable as I would want them to be, but it's the best I could find. Number 4 has a great run-down of TDS for different water sources.

Not the answer you're looking for? Browse other questions tagged botany life-history flowers phenology flowering or ask your own question.

109
Why do plants have green leaves and not red?
16
Why does the oxygen produced in the photosynthesis come from water and not carbon dioxide?
9
Why are plants referred to by their Latin species names, and not by their popular names?
2
Why is xylem a tissue and not an organ?
4
What is it called when a dead flower is rotted away and only the veins remain?