Coming from Darwin's notebook this first sketch of a phylogenetic tree became one of the most emblematic image from Darwin's work. 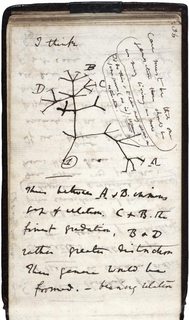 I have a hard time to read what is written on it.

What is written on this page?

evolution phylogenetics history
Share
Improve this question
asked May 26 '16 at 7:08

This is from Darwin's Notebook B: Transmutation of species from 1837–1838. From what I understand, the tree is a hypothetical depiction of descent used to discuss differences and relatedness between forms/species. This is the text that accompanies and follows the sketch (notebook pages 36-44): 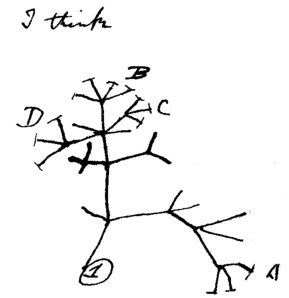 Case must be that one generation then should be as many living as now. To do this & to have many species in same genus (as is) requires extinction. Thus between A & B immense gap of relation. C & B the finest gradation, B & D rather greater distinction. Thus genera would be formed. — bearing relation

to ancient types. — with several extinct forms for if each species an ancient (1) is capable of making 13 recent forms, twelve of the contemporarys must have left no offspring at all, so as to keep number of species constant. — With respect to extinction we can easy see that variety of ostrich, Petise may not be well adapted, and thus perish out, or on other hand like Orpheus being favourable

many might be produced. — This requires principle that the permanent varieties produced by inter confined breeding & changing circumstances are continued & produced according to the adaptation of such circumstances, & therefore that death of species is a consequence (contrary to what would appear from America)

of non-adaptation of circumstances. —
Vide two, pages back.
Diagram
The largeness of present genera renders it probable that the many contemporary, would have left scarcely any types of their existence in the present world. — or we may suppose only each species in each generation only breeds; like individuals in a country not rapidly increasing. —

If we thus go very far back to look to the source of the Mammalian type of organization; it is extremely improbable that any of his relatives shall likewise the successors of his relations shall now exist — In same manner, if we take a man from any large family of 12 brothers & sisters in a state which does not increase

it will be chances against any one of them having progeny living ten thousand years hence; because at present day many are relatives, so that by tracing back the descen fathers would be reduced to small percentage. — & in therefore the chances are excessively great against any two of the 12. having progeny after that distant period. —

Hence if this is true, that the greater the groups the greater the gaps (or solutions of continuous structure) between them. — for instance, there would be great gap between birds and mammalia, Still greater between

Vertebrate and Articulata, still greater between animals & Plants.
But yet, besides affinities from three elements, from the infinite variations, & all coming from one stock & obeying one law, they may approach, — some birds may approach animals, & some of the vertebrates invertebrates —
Such a few on each side will yet present some anomaly & the g bearing

stamp of some great main type, & the gradation will be sudden. Heaven know whether this agrees with Nature: Cuidado.

The text together with actual pictures of the notebook pages can be seen at http://darwin-online.org.uk. Pages ~38-41 are often seen as key ideas for Darwin's formulation of natural selection. Also note that the presence/absence of a horizontal line at the tips are apparently used to denote extant vs extinct groups (see notes in link above).

Not the answer you're looking for? Browse other questions tagged evolution phylogenetics history or ask your own question.