What are tail currents? 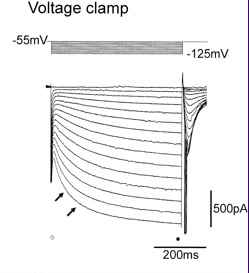 This is a voltage clamp on an ion channel. When the voltage is stopped there is a still a current at the end (the tail current). I understand that the gates aren't completely closed because of which there is still some current flowing.

What I don't understand is that why does the current suddenly jump to a small value? Shouldn't it gradually go down?

neuroscience electrophysiology
Share
Improve this question
asked May 29 '16 at 6:41

OK, I know this is old, but here goes. The tail current is the current at -55mV after the voltage step, here: 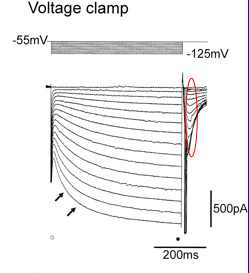 The current shrinks as the voltage changes, this causes a massive shift in the driving force for the ions either side of the cell membrane. Going from -125 to -55 mV for the largest step. As commented, the dense vertical bands either side of the step are due to fast capacitance readings, basically ignore unless you want to go down a whole other avenue.

The reason for the tail currents is some channels remain open and close gradually after the step ends "tailing" off. We can't really say what channels these are as we know nothing about the recording conditions/cells involved. However these currents are large, so most likely to be sodium/potassium.

Pretty much think of this as two current sources superimposing on each other. One is the current caused by difference in voltage (Ih). Ih is a mix of potassium and sodium current. While it is voltage dependent, it doesn't follow simple Ohm's law as this has to do with activation of channels rather than membrane. source The other is current caused by capacitive property of the membrane. Since capacitive current is proportional to rate of change in voltage, increase in voltage results in positive capacitive current.

So when voltage increased from -125 to -55 mV, there is a positive capacitive current as well as exponentially decaying Ih. These two superimposing each other almost leads to the picture we see in OP's question. I cannot explain why there is the huge negative spike in current after the small positive peak though.

Source: I learned this in class one year ago.

and nice animation of what happens during voltage clamp experiment

Tail currents are observed because current $I = g(V-E)$ suddenly changes with $V$, whereas $g$ changes gradually following some kinetics. Thus, at sudden transition of voltage $V$, $I$ changes by a factor, which is observed as tail current with a jump.

Not the answer you're looking for? Browse other questions tagged neuroscience electrophysiology or ask your own question.

28
Why is saltatory conduction in myelinated axons faster than continuous conduction in unmyelinated axons?
10
How is membrane capacitance related to the increased speed of saltatory conduction?
10
How are neurons / synapses “biased”?
1
Can action potential generating ion channels only be understood as assemblies of membrane proteins (and not as single proteins)?
0
How do firing patterns arise from the activity of many ion channels?
0
Understanding Hodgkin-Huxley's model and activation variables
1
In the PR segment of an ECG, how come there's no current flowing?
2
Help me understand voltage patch clamping