The Perplexing Trilobite: What is the Evidence Supporting The Hypothesis That They are Not Crustaceans?

In the field of paleontology, one question that's really bugged me (er, no pun intended) of late is why the subphylum/class Trilobitomorpha/Trilobita is off on its own branch of the Arthropoda phylum, or alternatively should be slotted under the Mandibulata clade.

What is the evidence justifying these hypotheses?

From a layman's perspective it seems compelling both from what is known of the physiology and morphology that it would make more sense to tentatively classify them as a early member of the order Isopoda, a part of the subphylum Crustacea.

Indeed, Alex Chestnut's Master's dissertation, "Using MORPHOMETRICS, Phylogenetic Systematics and Parsimony Analysis to Gain Insight into the Evolutionary Affinities of the Calymenidae Trilobita" states on the history of trilobite studies that Charles Lyttleton, one of the earliest documented discoverers of trilobite species, asserted that trilobites belong not to insects, but to "the crustaceous tribe of animals."

Indeed, if this is the case, morphologically we see that the trilobite shares many features with modern isopods (i.e. "sow bugs", "pill beetles", "roly-polys" etc.). Look at this newly discovered albino cave isopod, for instance: 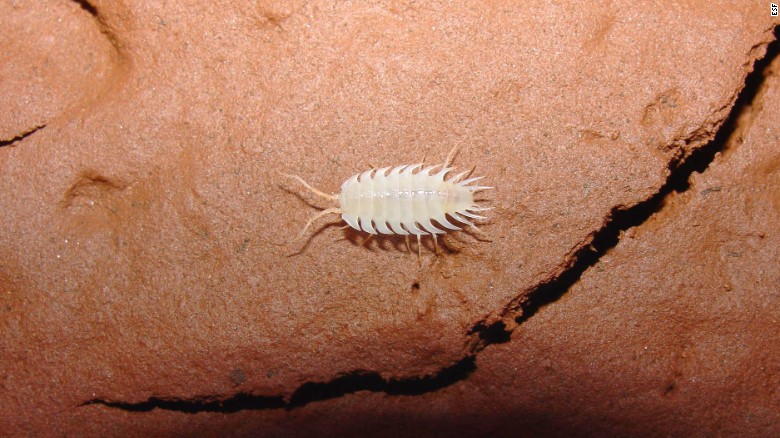 And now look at this fossilized Crotalocephalus africanus: 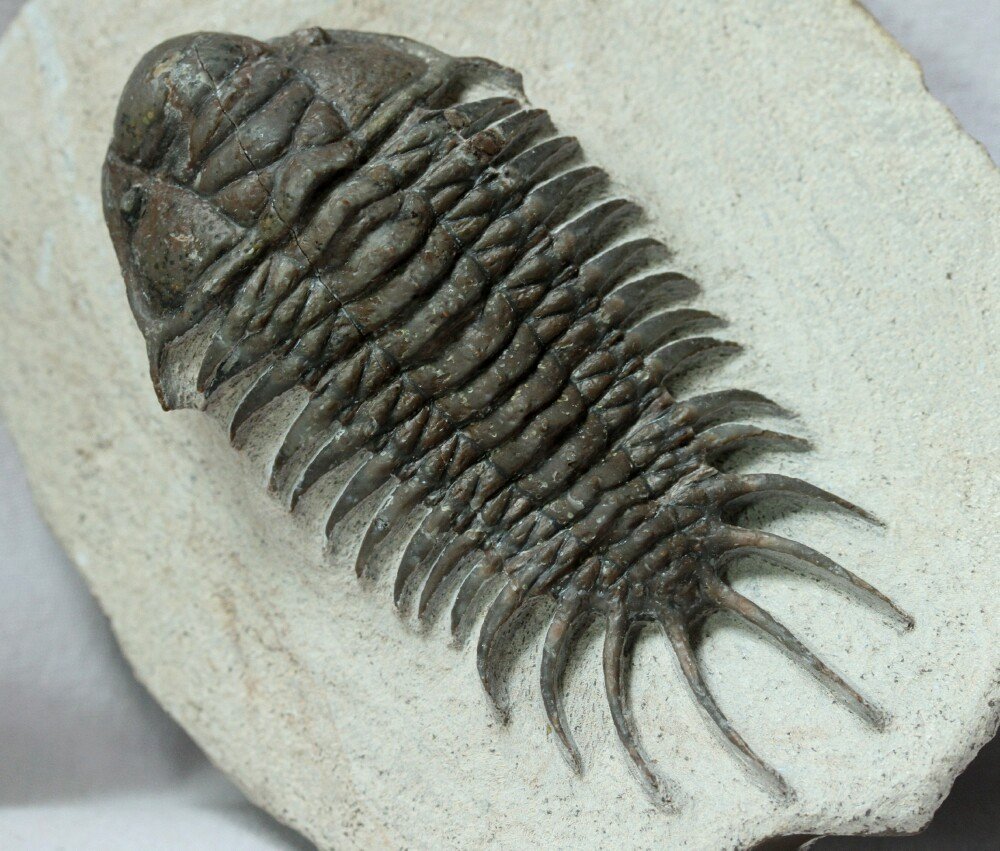 And this Armadillium vulgare (Latreille) pillbug: 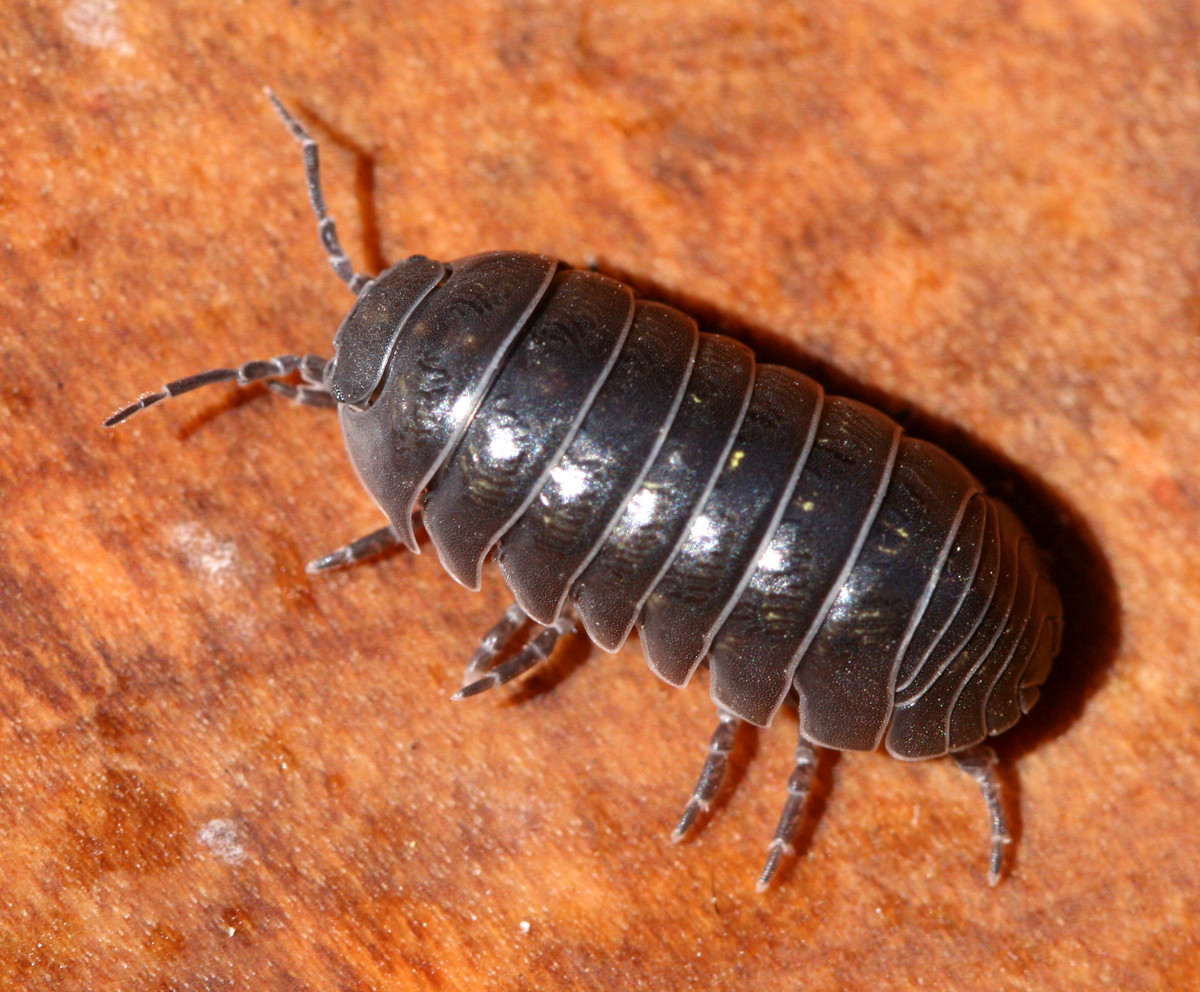 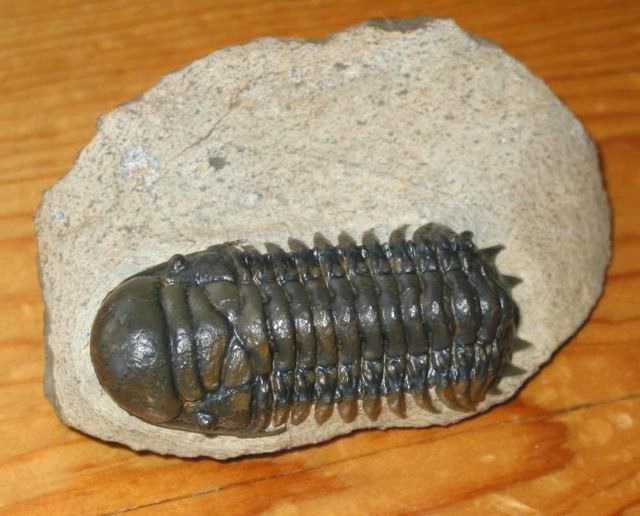 Well, you get the idea. Trilobites look perhaps look morphologically more like isopods than any other living order (although a certain roach (members of the Laxta genus, i.e. Laxta friedmani) does also look uncannily similar until you get to the legs and wings).

And apparently at one time, they were classed under Crustacea (the subphylum Isopoda is in), hence raising the possibility that Isopoda may be "living fossils" or the modern descendants of trilobites.

However, the Wikipedia entry for trilobites states:

Once soft-part anatomy had been recovered, the trilobites were originally allied to the Crustacea; however, this suggestion has since fallen out of favour.

While it goes in depth into what is known or believed to be known about trilobite physiology and morphology, it never really explains WHY trilobites are no longer believed to be crustaceans.

It goes on to state, though, that apparently this is being reconsidered... but not in the subphylum Chelicerata (?!) which Isopoda lies under:

A relationship with the Chelicerata, in a clade termed Arachnomorpha (Arachnata), was in vogue for some time; a position in the Mandibulata (=Myriapoda + Crustacea + Hexapoda) stem-group may be a more parsimonious alternative.

Now the other defining characteristic of crustaceans vs. myriapods, from what I've read, is the brain size. But from what I understand little is known about the trilobite brain. But I would argue the presence of compound eyes and the believed predatory niche suggests a more complex brain. So that would make another somewhat hypothetical reason to pick Crustacea over Myriapoda.

I was unable to identify any clear evidence in favor placing trilobites in Myriapoda vs. Crustacea..

Let's look at the overall defining morphological/physiological traits of Crustacea:

To my knowledge other than the internal organs (which are not well known) trilobites meet all of these criteria.

And then there's the visual test, as seen above, between living isopods and trilobite fossils. They look obviously similar.

According to the chapter "The Trilobite Body" in Kaesler, R. L.'s, "Treatise on Invertebrate Paleontology, Part O, Arthropoda 1, Trilobita, revised. Volume 1: Introduction, Order Agnostida, Order Redlichiida", each endopodite (walking leg) had 6 or 7 segments. This might appear to be a morphological difference between modern isopods, but it is also stated that basically ALL early arthropods (including early Crustacea) are known to have this segmentation.

That brings me to my final point ... whatever scant few traits that do offer some evidence against trilobites being an early member of Isopoda in the Crustacea subphylum appear to be in part, at least, morphological differences that are somewhat ambiguous and may be merely evolutionary artifacts that existed in other Crustacea at the time as well.

So the visual and morphological evidence seems to point strongly to trilobites being isopods. What compelling evidence exists in favor of putting them under the subphylum Chelicerata?

And why is that evidence viewed as stronger than the aforementioned evidence to put it under the subphylum Crustacea, perhaps as early ancestors of Isopoda.

Trilobites had bodies divided into 3 lobes lengthwise. Hence the name trilobite = 3-lobed critter. The head or cephalon of the trilobite is large, nearly as broad as the body and marked by sutures. These are the easy-to-see differences. There are several other differences that it would typically take a trained paleontologist to detect, including crystaline calcite lenses in the eyes, a rostral plate, and hypostomal wings. These are summarized here with nice illustrations: http://www.trilobites.info/triloclass.htm#trilobites. More details: http://www.trilobites.us/trilobite-morphology.htm.

The overall similarity between isopods & trilobites may be due to convergent evolution, isopods replaced trilobites in a benthic detritovore niche after the great Permian extinction. https://en.wikipedia.org/wiki/Permian%E2%80%93Triassic_extinction_event

Claiming that "isopods are trilobites" appears to be the first new argument from the creationists in a century. https://sciencenotes.wordpress.com/2006/04/29/trilobites-are-not-isopods/ explains and has a prettier isopod picture.

2
What is the formal terminology for two species that are "close" to each other in a phylogenetic tree?
1
What is the number of species known through paleontological evidence?
1
What are some examples of interbreeding between species that are separated by 5 million years or more?
1
What are all the possible developmental stages an insect can be in?
0
What were the three dinosaur evolutions and do they imply that bipedalism could have evolved multiple times in hominins?
1
What are the apomorphies of Streptophyta that delineate them from Chlorophyta in Viridiplantae?