What is the genetic difference between two cone branches?

As we can see on this larch, male and female cones are sometimes directed to grow on the opposite side of the branch. We were told in school that this mechanism works against self-fertilization. Also they flower in different times, so they are mostly fertilized from the other conifers.

When I saw this picture, I got that idea, that maybe they face the branches on above by design: To decrease the genetic uniformity at least a little.

But how important this effect actually is? And how big is the genetical difference between two branches? Are there any other factors taking effect in the tilt of the cones? 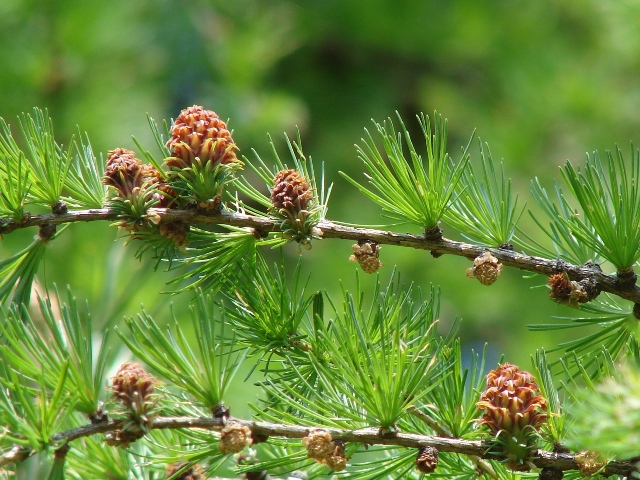 genetics botany plant-physiology
Share
Improve this question
asked May 30 '16 at 12:32

I don't understand your hypothesis. But the number of pairwise differences between two cells assuming neutrality ($\pi$) in the two different branches in $\pi = 2 \mu L t$, where $\mu$ is the somatic nucleotide mutation rate (around $10^{-11}$ on average), $L$ is the length of the sequence of interest (eventually the whole genome). $L$ can therefore be of the order of $10^9$. $t$ is the number of cell generation since the two cell lineages split. $t$ depends on the relative positions of the two branches but it could be $10^4$ cell generations. With these very quick approximations, we can estimate the number of pairwise differences as

Having separate male and female cones reduces self-fertilization just by the physical separation (the greater distance for pollen to travel gives pollen from a different tree a larger chance of successful fertilization). A much larger effect is from the timing of flowering, since on an individual tree the female cones will be receptive at a time when the male cones on that tree are not releasing pollen.

Another reason for the different orientation of the cones is probably gravity. The male cone, hanging downwards, can have its pollen fall out of the cone into the air where wind can transport it. The female cone, pointing upwards, can capture settling pollen into its upward facing structures.

Not the answer you're looking for? Browse other questions tagged genetics botany plant-physiology or ask your own question.