In my immunology notes, it states that B lymphocytes (and other APCs) capture and present antigens to T lymphocytes that is specific for an antigen, but that the T cells do not necessarily recognise the same epitope. How can a cell be specific to an antigen but not to the epitope presenting on the surface of the antigen?

I've been in the process of discussing this with a friend and trying to make sense of Janeway's immunobiology and we've come to the theory that the APC recognises the antigen and takes it up, breaks it down and presents the epitope via the MHC where it is then recognised by the T cell. Am I right in saying that the antigen is broken down into many fragments that act as epitopes but each clonal expansion of T cells can only recognise the various epitopes of one antigen?

Perhaps it would simplify for you to think of a model system? Let's take HIV because it's simple. The antigen in this case is a protein called ENV and it looks like this. 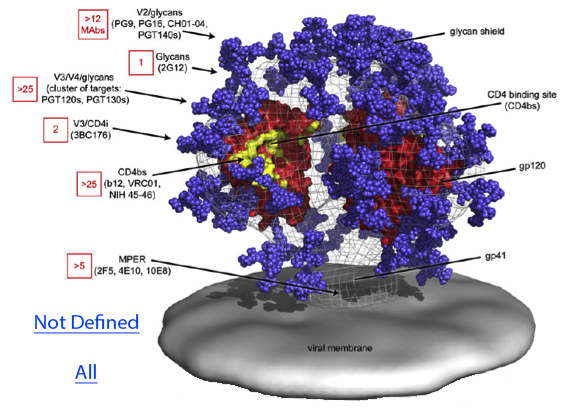 I think where you may be getting confused is when B cells chew up an antigen, the epitope they display on MHCII and display to T cells is not necessarily the same epitope it used to recognize the antigen. The B cell chews up the entire antigen, including T cell epitopes, and displays them on MHCII.

For this answer lets restrict ourselves to T dependent MHC II mediated responses.

So, an APC like a macrophage or a dendritic cell, takes in a pathogen by phagocytosis and degrades it inside the cell. Some of its broken proteins, which are antigens are presented on the MHC II of this particular APC.

The B cells also do something similar but they identify either free floating antigens or the ones that are expressed by phagocytic APCs. These antigens are broken down in the lysosome. These fragments now are expressed on the surface along with MHC II. This fragment may or may not contain the epitope that the B cell receptor (surface antibody) originally recognised the antigen with. Also, it is not that just one of the fragment is taken to the surface, most of them make it, each with a separate MHC.

The T cell that is going to now interact with this B cell may have a TCR (T cell Receptor) against the epitope in any one of those fragmented antigens on the MHC.

This T-cell is specific to that particular epitope of the antigen it bound to, similarly there could be another T-cell that could recognise some other fragment of the same antigen brought to the membrane by a different MHC II.

So, the epitope that the B-cell and the T-cell recognised the antigen with, needn't be the same. But logically, there's a possibility that they may be. 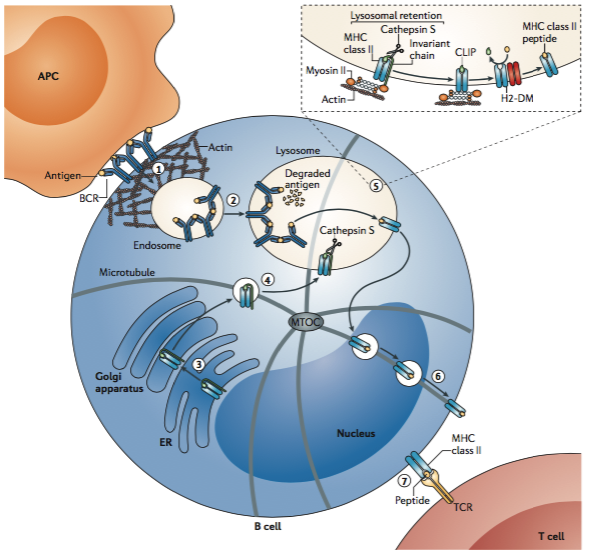 Not the answer you're looking for? Browse other questions tagged homework immunology antigen or ask your own question.

2
peptide MHC microarray
7
Why cytotoxic T cells don't kill dendritic cells when they present antigen?
1
Does RNA-LPX expression of antigen by DC induce only T-cell with that antigen specificity?
1
What determines whether a regulatory T cell suppresses a naive T cell binding the same antigen-presenting cell?
1
How are antibodies specific for a disease detected in the blood if everybody produces a different antibody for the same antigen?
5
Fate of antigen-presenting cells after antigen presentation to Helper T cells
2
Transplant rejection through direct allogenic antigen detection: where do the T cells come from?