Why is DNA replication performed in the 5' to 3' direction?

DNA replication goes in the 5' to 3' direction because DNA polymerase acts on the 3'-OH of the existing strand for adding free nucleotides. Is there any biochemical reason why all organisms evolved to go from 5' to 3'?

Prof. Allen Gathman has a great 10-minutes video on Youtube, explaining the reaction of adding nucleotide in the 5' to 3' direction, and why it doesn't work the other way.

Briefly, the energy for the formation of the phosphodiester bond comes from the dNTP, which has to be added. dNTP is a nucleotide which has two additional phosphates attached to its 5' end. In order to join the 3'OH group with the phosphate of the next nucleotide, one oxygen has to be removed from this phosphate group. This oxygen is also attached to two extra phosphates, which are also attached to a Mg++. Mg++ pulls up the electrons of the oxygen, which weakens this bond and the so called nucleophilic attack of the oxygen from the 3'OH succeeds, thus forming the phospodiester bond.

If you try to join the dNTP's 3'OH group to the 5' phosphate of the next nucleotide, there won't be enough energy to weaken the bond between the oxygen connected to the 5' phosphorous (the other two phosphates of the dNTP are on the 5' end, not on the 3' end), which makes the nucleophilic attack harder.

Watch the video, it is better explained there.

DNA replications needs a source of energy to proceed, this energy is gained by cleaving the 5'-triphosphate of the nucleotide that is added to the existing DNA chain. Any alternative polymerase mechanism needs to account for the source of the energy required for adding a nucleotide.

So any 3'-5' polymerase would likely need to use the same nucleotide-5'-triphosphates as the 5'-3' polymerase. This would mean that the triphosphate providing the energy for addition of a new nucleotide would be on the DNA strand that is extended, and not on the newly added nucleotide.

You can take a look at the article "A Model for the Evolution of Nucleotide Polymerase Directionality" by Joshua Ballanco and, Marc L. Mansfield for more information about this. They created a model on early polymerase evolution, though they don't reach any final conclusion.

In my opinion, Prof. Allen Gathman's "great 10-minutes video on Youtube" is a pretty waste of time if you already know how hydrolysis happens. In fact, he has not considered the 3'->5' route in an unbiased manner; he doesn't seem to look at the possibility of a triphosphate appearing at the growing 5' tip of the strand in the 3'->5' case.

In fact, it is known that RNA polymerase has dual activity, but you see, RNA polymerase doesn't have proofreading activity!. Proofreading requires removal of the mismatched base, but in the 3'->5 direction the base's attachment had consumed the triphosphate at the 5' tip of the strand, so it is no longer available to add the replacement base. 3'->5' activity readily destroys proofreading capability of a polymerase So, basically, it is the need for proofreading that restricts the synthesis of DNA strands to 5'->3'. Why it is so, would need a lot more explanation (if in words) but I think a picture has far better explanatory power than a thousand words. I've added a picture from Essential Cell Biology that shows the answer to the 'WHY' question: 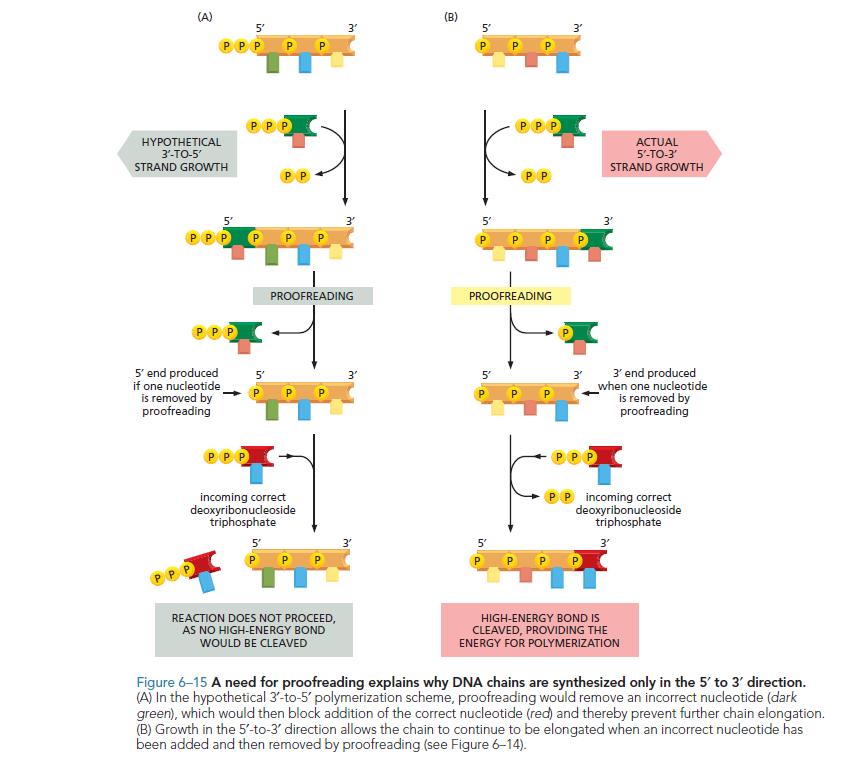 Not the answer you're looking for? Browse other questions tagged dna replication polymerase or ask your own question.

4
Why are transcripts translated from 5' to 3' direction?
4
Does DNA polymerase always go the same direction?