Relationship between lifespan and reproductive age?

I remember reading a while ago that there is a "general rule" in biology between an animals lifespan and when they reach reproductive age.

Is there a special name for this "law" or "rule"? Are there any major papers/theories supporting it that also attempt to propose why (perhaps from an evolutionary perspective) this trend exists?

1.) Is there also a trend between lifespan and animal size?

2.) Is there also a trend between lifespan and base metabolic rate?

3.) Do the two aforementioned "trends" or "rules" have technical names that I could look up as well?

The sort of thing you're talking about would be called a Life History Invariant: a dimensionless ratio between two life history traits $A$ and $B$, such that although the traits themselves vary widely between species, the ratio $\frac{A}{B}$ is relatively constant.

Eric Charnov has written a lot about this, including a book. 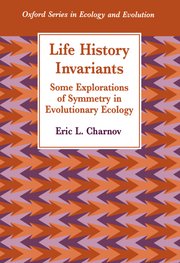 One of the invariants which has been suggested is the ratio of age of maturity $\alpha$ to adult lifespan $E$. Charnov claims that it is relatively invariant within taxa, but has a different value for eg. fish vs. mammals vs. birds vs. reptiles. 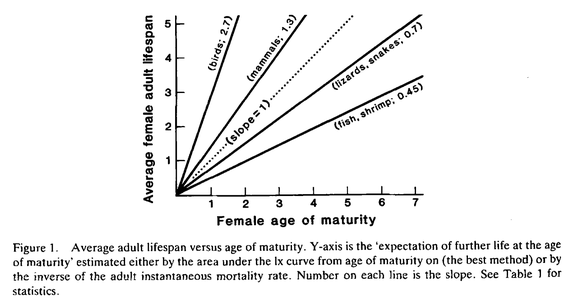 From Charnov and Berrigan, "Dimensionless Numbers and Life History Evolution: Age of Maturity Versus the Adult Lifespan", Evolutionary Ecology (1990).

(If the ratio $\frac{A}{B}$ is invariant, then plotting $A$ vs. $B$ for different species on a regular graph will give you a straight line passing through the origin. The slope of the line gives you the value of the invariant.

Sometimes, in looking for an invariant researchers will instead graph the quantities on a log-log plot: they then look for whether the curve is a straight line with slope 1 (whose height gives the value of the invariant), with a good fit. This method has been criticized: the fact that some quantities are just about necessarily a fraction of other quantities (eg. you can't really lay an egg bigger than yourself), together with the fact that log-log plots "squish down" variance about the regression, opens the possibility of observing artifactual yesses. I tried to give an intuitive explanation of this criticism in a quora answer. Charnov and company have dismissed it as not applying to the invariants they found, however.)

Finally, it's important to note that even if a quantity is relatively invariant, it can't be expected to be perfect; you have to decide how much noise you want to allow while still finding an approximate invariant interesting.

There certainly is a general trend of later reproductive age and longer lifespan. This is simply because the organisms need to live at least until their reproductive age to be able to reproduce. However, other than that I think there is no definitive correlation that animals normally live approximately eight times as long as their reproductive age (as your Elephant example seems to suggest). For example, many Insects such as the Mayfly only live until they reproduce and then die quickly (speaking of a "magical first time").

To your supplementary questions:

1) Similar to the above there is a general trend of larger body mass and longer lifespan. This is because a larger body requires longer to grow. Again, beyond this very basic correlation, I would be careful of trying to find rules there as you will find very different lifespans in animals of similar size. Take for example the mole (lifespan 6 years) and the naked mole-rat (31 years).

2) No there is no general correlation between body size and metabolic rate. Metabolic rates vary greatly with habitat, warm blooded/cold blooded animals etc. If you restrict yourself to a certain family of species, such as mammals, you may find a weak correlation. For example, many smaller mammals have a higher metabolic rate, because their larger surface to volume rate requires a fast metabolism to keep their body temperature up. However also here you will find many exceptions (think of hibernation).

To summarize: It is tempting to try to find "general rules" in biology. However, while you will find many trends and correlations, particularly within certain families of species, calling them a rule is dangerous as it may lead people to believe they are generally true which is usually not the case because you will find exceptions everywhere. This is also the reason why you will not find names for such "rules" in reputable scientific literature.

I can't find a very fine writings/documents to support this or satisfy your question.

I think, it's related somehow. Let's take a sample: (It's not super accurate but you can make a search)

The data above is some-kind the "usual" but still it's not the 100% of proof. There are other factors that affects the lifespan and reproductive age relationships like:

Not the answer you're looking for? Browse other questions tagged evolution reproduction lifespan or ask your own question.

0
Do trees have no set lifespan and "quite"immortal?
1
What's the difference between evolution fitness and reproductive success?
0
How much time does it take for an evolutionary change to take place?
0
Mechanism to limit the exponential growth of the number of ancestors that are n-generations away from an organism?
2
What terrestrial trait makes cetaceans so successful in an aquatic lifestyle?