Why are turtles classified as reptiles and not amphibians?

I understand that turtles are reptiles because like all reptiles, they have scales on their body. But turtles (specifically sea turtles) live on both land and water, very much like amphibians. Also, don't sea turtles have more of a moist skin unlike reptiles? So is there any anatomical difference which makes turtles different from amphibians?

A group consisting of an ancestral and all its descendants.

Reptiles include turtles, lizards, snakes, alligators and dinosaurs (which include the birds: all birds are dinosaurs). It doesn't matter if a animal has or has not scales, or if it lays eggs or if it is viviparous, or if it has 5 fingers or 3 fingers: All the descendants of a given ancestor are included in the monophyletic group that contains that ancestor.

Turtles, despite being strange or somehow different, are descendants from the same most recent commom ancestor of Reptilia... that's why turtles are reptiles (and that's why birds are reptiles as well).

To make this more clear, have a look at this cladogram (from Hickman, Integrated Principles of Zoology): 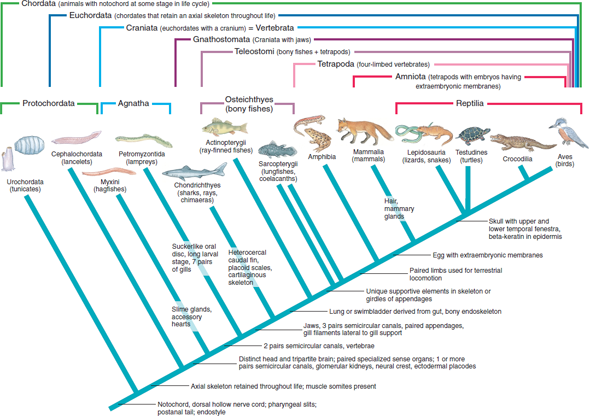 The apomorphy that defines the tetrapods is "paired limbs". You have Amphibia to the left and Amniota to the right, whose apomorphy is " egg with extraembrionic membranes". Inside them, you have Reptilia, whose apomorphies are "skull with upper and lower fenestra and beta-keratin in epidermis". Turtles came from an ancestor with these characteristics. So, turtles belong to the monophyletic group of "Reptiles".

Post scriptum: You wrote that "turtles (specifically sea turtles) live on both land and water, very much like amphibians". Just a curiosity: the reason why sea turtles leave the water (sea) from time to time shows exactly that they are not amphibians! Amphibians, being non-amniotes, have eggs that survive under water (actually, with few exceptions, they need to be under water). Turtles, on the other hand, are amniotes, and the amniotic egg cannot be laid under water. That's why the turtles have to leave the water to lay eggs: because, contrary to the amphibians, they cannot lay eggs under water.

In addition to @Gerardo's answer:

The term Reptiles as used in popular language does not represent a monophyletic group. When using the term Reptiles, one is typically thinking of turtles, snakes and lizards but excluding birds and mammals (and a few other things not worth mentioning). There are two clades (monophyletic groups) whose name sounds like Reptiles and whose meanings are related; Reptilia and Reptiliomorpha.

Reptilia is the clade that @Gerardo discusses in his answer. Reptilia includes turtles, crocodilians, snakes, amphisbaenians, lizards, tuatara and birds.

Reptiliomorpha is a clade that includes Reptilia, Synapsida (mammals and close relatives) and a few extinct lineages.

Visualizing the tree of life by yourself

Onezoom.org is better updated and has a nice pleasant look. However, I often find tolweb.org more convenient for investigating the true meaning of a specific clade.

You might want to have a look at Understanding Evolution by UC Berkeley. It is a very introductory course on evolutionary biology and it includes a part on the phylogenetic tree.

I also strongly recommend having a look at the related question If dinosaurs could have feathers, would they still be reptiles?

Turtles are not amphibians because they have (largely) non-permeable skin whereas amphibians can absorb oxygen through their skin. There are also differences in their reproductive cycle: turtles are amniotes, so they produce eggs that must be laid on land, whereas amphibians - like fish - are not and must lay their eggs in water.

Since the categorisation pre-dates the development of cladistics, and the group normally called reptiles are not monophyletic, I don't think cladistic based answers are a good answer to this question. It is the morphology and physiology that matters.

Not the answer you're looking for? Browse other questions tagged evolution zoology taxonomy phylogenetics or ask your own question.

22
If dinosaurs could have feathers, would they still be reptiles?
2
What's the most recent common ancestor of reptiles and humans?

34
Can any animals photosynthesize?
6
Why do different humans look different?
4
Why don’t different organisms have nucleic acid genomes containing different bases and sugar?
7
Is it a coincidence that the sensory systems for smell, vision, taste, and hearing are all near each other in the head?
1
Why is the ability to drink salt water so rare in land-animals?
1
Why aren't mammals and reptiles considered amphibians?
2
What terrestrial trait makes cetaceans so successful in an aquatic lifestyle?