What is the relationship between independent assortment and cross over?

During meiosis, the independent assortment will be made first and then cross over will be made.

I am so confused, what is the difference between this two process? 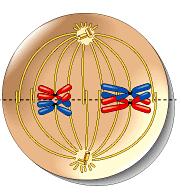 Independent assortment describes the phenomenon where the paternal and maternal chromosomes can be lined up randomly at the equator. There are many combinations. For example,

In conclusion, crossing over and independent assortment (sometimes called random assortment) are different independent processes that both lead to an increase in genetic diversity.

Not the answer you're looking for? Browse other questions tagged genetics homework meiosis or ask your own question.

2
What does entering of sex chromosomes to gametes mean during meiosis I?
3
How does chromosome cross-over occur?
1
what is the modern, molecular explanation of independent assortment of alleles?
2
What distinguishes Mendelian Inheritance from Non-Mendelian Inheritance?
4
What are the exceptions to Mendel's laws?
1
Sister chromatids during meiosis
0
What is the chance a given gene will end up in a given gamete?