Do Tumor-Infiltrating T Cells Experience Any Prolonged Effects Due To Hypoxia After They Return To Normoxia?

Adoptive cell transfer (ACT) therapy using tumor-inflitrating lymphocytes (TIL) is at the cutting edge of immuno-oncology treatments involving metastatic melanoma and other indications (1). The idea is that at some point during the growth of a tumor, some T cells attempted to mount an immune response, extravasated and got into the tumor, but they became overwhelmed and exhausted. The therapy itself involves taking these cells out from some excised tumor, reversing their condition and since they're already neo-antigen specific from having attempted an attack on that cancer: Expand them, put them back in the patient, let them hit the tumor much harder than before.

Not only do you need to reverse exhaustion in the TIL, but you also need to have the right population of T cells to get the best response. The factors involved are beyond this question, and so I'll get to the point.

In the tumor environment, the T cells become exhausted and their expression profile changes (2). It makes them more prone to apoptosis and they lose effector functions like GranzymeB production. You can tell how this is problematic. My suspicion is that in the tumor the T cells may become hypoxic, and what we know is that in the oxygen-sensing pathway, hypoxia inducible factors exert their effect. Normally, these should be kept in check by inhibiting proteins if they get produced under normoxia: 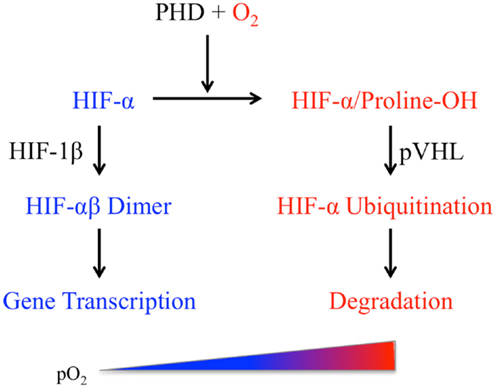 And so to my question:

After prolonged exposure to hypoxia, are there any regulatory or transcriptional changes that after prolonged return to normoxia render either of HIF1α or HIF2α active where they would normally be repressed?

Whether I just need a fresh set of eyes or the data just doesn't exist, I haven't necessarily found it obviously. I'd like to know if there's a remnant hypoxia-like regulation framework that remains after O2 gets back to normal that affect pathways like mTORC1/2. Thanks if advance for any insights!

Browse other questions tagged cell-biology immunology cancer or ask your own question.

7
How similar are Circulating Tumor Cells and Cancer Stem Cells?
12
What are the differences between cancer and tumour?
3
Why does a tumour's genome change depending on the environment?
6
Why do epithelial cells arrest in response to serum?
2
How can rapid growth cancer get nutrients in vivo?
4
How was gene therapy able to cure diseases through the transformation of actively dividing cells?
4
How do CD 8+ Tc cells reach the site of tumors?
1
Does RNA-LPX expression of antigen by DC induce only T-cell with that antigen specificity?
1
Could tumor cells have normal genomic profiles?