What is the difference between replication and to divide? My A level bio book says that it takes 20 min for E.coli to divide and in next page it's written that E.coli completes replication within 38min.

Moreover, there is a diagram (shown below) which contradicts as what I thought.

Please explain the difference between replication and division. 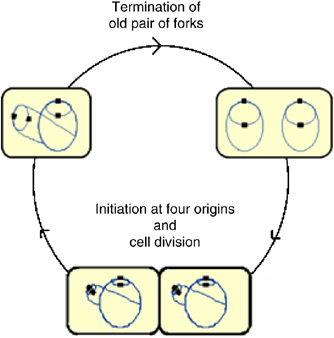 The picture that you have shown is something totally different. As mentioned by Chris, the picture illustrates the Messelson-Stahl experiment to demonstrate the semiconservative nature of DNA replication. Do not confuse that with the above problem. As for the 40min shown from generation-1 to generation-2, in this picture, I feel that it is a misprint.

I am unsure if I really understand the question. Are you wondering how the rate of DNA replication can be slower than the rate of cell division if every daughter cell needs a chromosome copy?

If so, keep in mind that prokaryotes have different origins of replication on their chromosome so that DNA replication can actually be parallelised. Cooper (1968) presents a mathematical model that is consistent with experimental findings and indicates that when the DNA replication step becomes limiting for cell division, E. coli switches to multiple replication forks, thus decreasing the net time needed for complete DNA replication.

According to that, it is no contradiction that DNA replication per se takes longer than cell division.

Not the answer you're looking for? Browse other questions tagged molecular-genetics dna-replication or ask your own question.