Why does uncompetitive inhibition decrease the Michaelis constant?

I can't seem to find a good resource online that clearly outlines the difference between an uncompetitive, noncompetitive, and mixed inhibitor (I understand competitive inhibitor though).

More specifically, why does uncompetitive inhibition decrease the Michaelis constant? 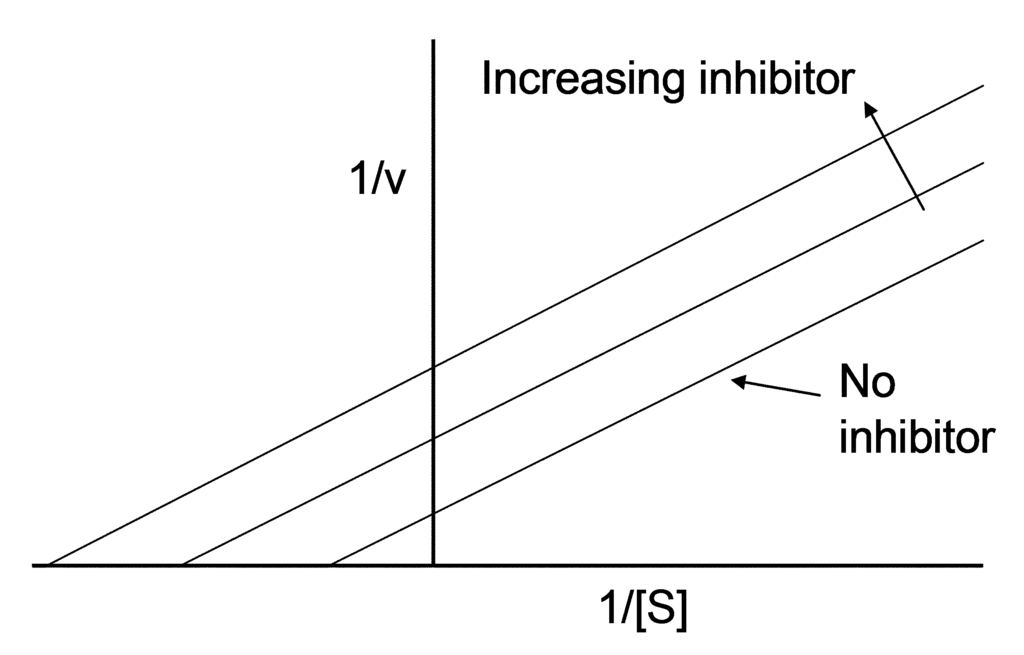 The uncompetetive inhibitor essentially "locks" the substrate in the enzyme thereby preventing the enzyme from catalyzing the substrate which would then decrease the amount of free enzyme. That should not, however, alter the value of $K_m$ because any copies of the enzyme that are still active ("not locked") maintain the same affinity for the substrate. I applied that same logic to noncompetitive inhibition (no change in $K_m$), hence the confusion.

First off, the difference between the types of inhibition:

The $K_m$, on the other hand, is an overall parameter of the rate equation, and doesn't necessarily have a direct relation to substrate binding. The confusion between the two arises from the fact that in simple enzymatic systems, under the simplified conditions we normally study them in, $K_m$ is a pretty decent approximation of the substrate binding affinity. Thus you'll have introductory textbooks saying that "$K_m$ is a measure of substrate affinity". -- a gross oversimplification. They're certainly related, but they're not exactly identical - especially when you get to more complex reaction schemes. Confusing the two leads to problems.

For a full accounting, you really should look at the derivations of the rate equations, and how the extra equilibria of the inhibitor binding changes things. (e.g. here or here) But for something of an intuitive explanation:

pure noncompetitive inhibition reduces the concentrations of substrate-bound and substrate-free forms equally. (The concentration of product-bound forms being negligible in the standard initial rate equations.) This is basically the same as reducing the total amount of enzyme, i.e. reducing $V_{max}$ or apparent $k_{cat}$.

competitive At saturating substrate concentration, the amount of free enzyme (and thus the effect of inhibition) is negligible. The rate at saturating substrate (i.e. $k_{cat}$) is thus the same. Therefore, it's the apparent $K_m$ that changes. (NOTE! The actual affinity to the substrate isn't changed by the inhibitor. Instead, the inhibitor specifically reduces the amount of free enzyme available, in a way that can be compensated for by higher substrate concentrations. This just so happens to change the rate equation in the same way changing the $K_m$ does.)

uncompetitive At negligible substrate concentrations, the amount of substrate bound enzyme (and the effect of inhibition) is negligible. Thus the rate should be the same with and without the inhibitor. If you recall, the enzymatic reaction rate at negligible substrate is parameterized by $k_{cat}/K_m$. For uncompetitive inhibition, this needs to stay the same. Thus both $k_{cat}$ and $K_m$ need to change in the rate equation, to the same proportion.

mixed - A mixture of the above effects, depending on the relative affinities to the substrate bound/unbound forms of the enzyme.