Is there evidence to suggest that sharks from prehistoric times live in the deep of the oceans?

I've had friends see the boat and giant teeth of a giant shark attack of a boat in Japan. (Teeth larger than a great white). [I can't find anything about this on the Internet].

In addition, this report from Pakistan seems to suggest that there are large sharks in the deep of the Oceans. 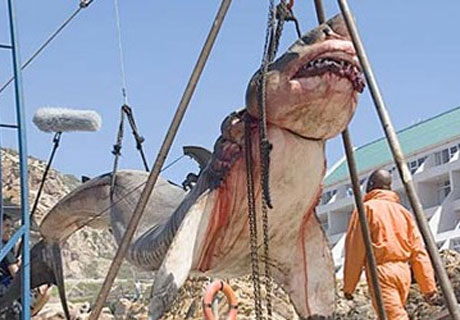 Karachi | A giant prehistoric shark previously thought to be extinct for more than 20 million years has been captured by local fishermen off the coast of Pakistan, reports the Islamabad Herald this morning.

The giant creature first thought to be a great white shark was rapidly declared by experts to be an unknown species of shark as it’s great weight and size were unheard of. Analysis of the teeth suggest the shark to be a parent of the Megalodon, an extinct species of shark that lived approximately 28 to 1.5 million years ago, during the Cenozoic Era.

The sea creature that measures an incredible 10.4 meters and weighs an astounding 15.6 tons is the largest living shark ever caught to date, great white sharks reaching an impressive 7 tons at full growth, a size that is no match for this giant prehistoric shark that can reach an imposing 20 meters in length and possibly weight up to 30 tons, depending on estimates.

My question is: Is there evidence to suggest that sharks from prehistoric times live in the deep of the oceans?

The article linked to is a hoax, and was debunked by Snopes.

The website is known for its hoaxes and satirical articles, and it states itself that its articles are faked.

WNDR assumes however all responsibility for the satirical nature of its articles and for the fictional nature of their content. All characters appearing in the articles in this website – even those based on real people – are entirely fictional and any resemblance between them and any persons, living, dead, or undead is purely a miracle.

The large apparent size of the shark as compared to the fisherman is due to a trick of perspective. This article shows the shark in perspective in a second image, which clearly shows that it is not as large as it apparently is in the first image. 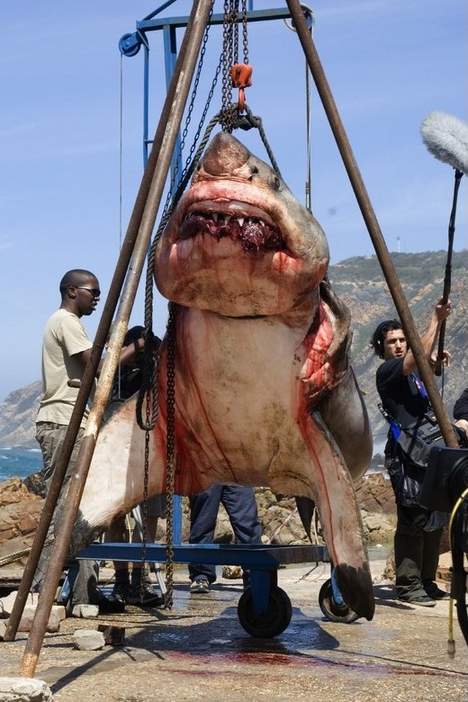 Not the answer you're looking for? Browse other questions tagged zoology marine-biology or ask your own question.

4
Is there a way for a 19th century scientist to prove that the octopus doesn't revive?
9
Are there species that occupy several roles in the food hierarchy?
6
The colour of aquatic plants found deep under oceans
5
Are there examples of animals that live in groups, where all have the same role?
7
Are there any animals that are unable to hear the human voice?