So I have been reading about the RAAS system and I was wondering how natrium (sodium ) ions increase blood pressure.I have been looking up on the internet and have yet to find an answer.Help

Angiotensin II is the product that causes the increase in blood pressure, because it is a potent vasoconstrictor. With peripheral vasocontriction the heart has more resistance to pump blood against, thus higher blood pressure. Additionally, angiotensin II stimulates secretion of aldosterone from the adrenal glands, which acts on the distal tubules and collecting ducts in the kidney to retain sodium and water, thereby increasing blood volume and thus blood pressure. 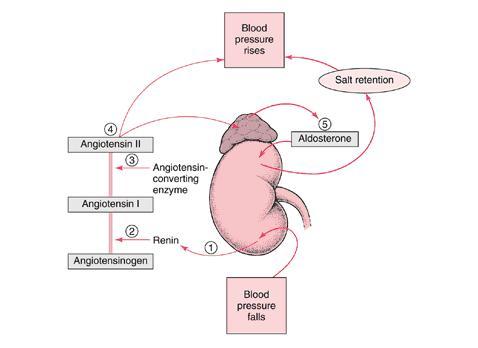 Your body removes unwanted fluid by filtering your blood throught your kidneys, the extra fluid is eliminated in urine. Basically the kidneys uses osmosis to draw the extra water out of your blood, using a delicate balance process of sodium and potassium. When you eat too much salt it increases the sodium in your bloodstream than wrecks the delicate balance, reducing the ability of your kidneys to remove the water. So the blood preassure gets higher due to the extra fluid and extra strain on the delicate blood vessels leading to the kidneys.

The increasing of the concentration of sodium ions in blood would attract water from the surrounding tissues, because of the osmotic pressure. The increasing of the total volume of blood(it has adsorbed water) makes the blood pressure higher. That is why in summer the blood [pressure decreases]. In fact, sweating makes us lose body salts, so the volume of blood decrease and so the pressure.

13
Blood Pressure: Significance of difference between systolic and diastolic
4
How does the mechanism which controls blood pressure in the brain work?
5
Why is it always Sodium that we talk of in blood pressure?
1
What could an increase in systolic blood pressure and decrease in diastolic mean?
0
How increased potassium intake increases sodium excretion?
0
Pressure measurement blood flow
9
Why does high blood pressure not damage the body during exercise?