How Much DNA do Siblings whose Parents are First Cousins Share?

On average, two siblings generally share 50% of their genome. How much does this increase if the siblings' parents are first cousins?

Before I actually answer your question, let us clear up some problems in your assumptions. The fact that you expect 50% similarity in siblings is a full of several assumptions.

Imagine a case of a simple diploid organism with 2 traits. To restate your assumption, if both the parents are heterozygous in either of the two traits, and the alleles present in either parent for each trait are different (four different alleles possible for each trait), then the probability of getting two children who share 50% of the same alleles is more than any other percentage sharing.

Let us break this down. We'll gradually add complications.

For the 2-trait organisms, let us assume the genotype of the parents to be $\text{AB,EF}$ and $\text{CD, GH}$ where $\text{A,B,C,D}$ are the alleles controlling trait 1. Hence, for their first child, the possible genotypes are $\text{ACEG, BCEG, ADEG, BDEG, }$ and so on.... Since there was no allele match in the parents, each of these genotypes is equally likely.

For the second child, the same possibilities with equal probabilities exist. Now, I computed a matrix which has each possible genotype for child 1 as rows, that of child 2 as columns and the values are the proportion of alleles shared (i.e. common between the two). 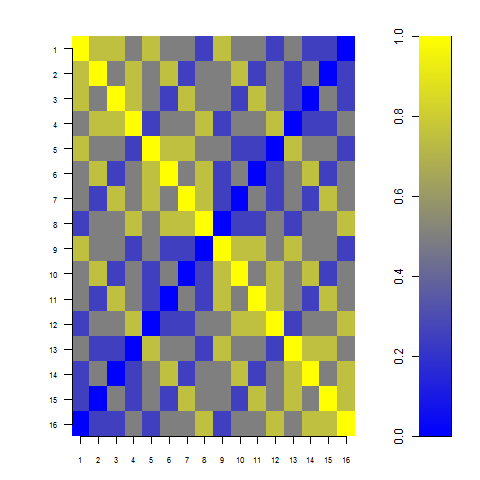 So, all proportions of the sharing is possible between the two kids. But, to find out the most probable configuration, we plot another kind of plot. 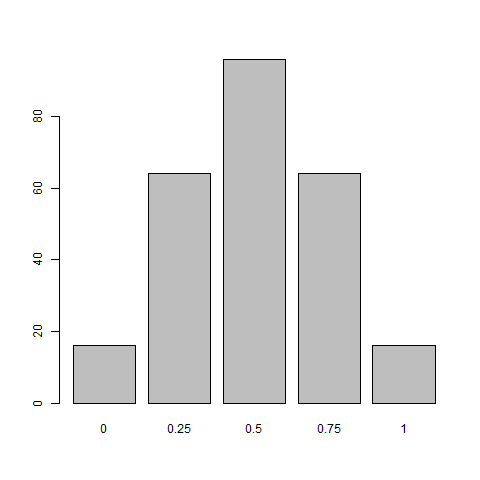 Technical note: Although the barplot has frequencies of appearing in the above similarity-matrix, it is equivalent to the probabilities since each genotype was equally likely.

Hence, the case with the two siblings sharing 50% of the genome is most likely for this case. Now, if we expand to 3 alleles, here's the corresponding plot. 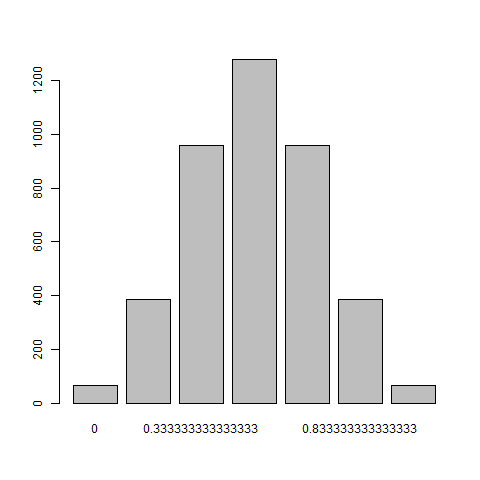 It shows, that even if we increase the number of traits (as we gradually approach the human case), the maximum likelihood still includes the sibling-organisms sharing 50% of the genome.

Now, what if the parents already shared some genome? Let us say, the 2 trait organisms already shared 50% of the genome. It is equivalent to say that in the genotypes elucidated above, $\text{A=C, E=G}$. With this assumption, I ran the same kind of simulation to get the following graph. 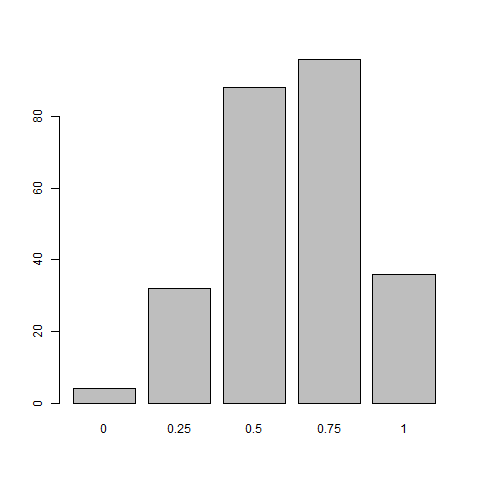 Another technical note: Although the plot still shows frequencies of appearing in the matrix,the repeats of the same genotype along rows/columns in proportion to their probability of forming will make these frequencies equivalent to probabilities.

So now, the siblings with 75% similarities are the most likely outcome.

Let us now ask, for the 2 trait organisms we are working with, that if the grandparents had zero genomic similarities, and their two kids in-breed, what will their two kids share? For this, we take the probabilities of the first generation (children of the grandparents, sorry for the semantic mashup) for each %overlap, and multiply it with the probabilities of their kids having the various overlaps and plot a final graph. 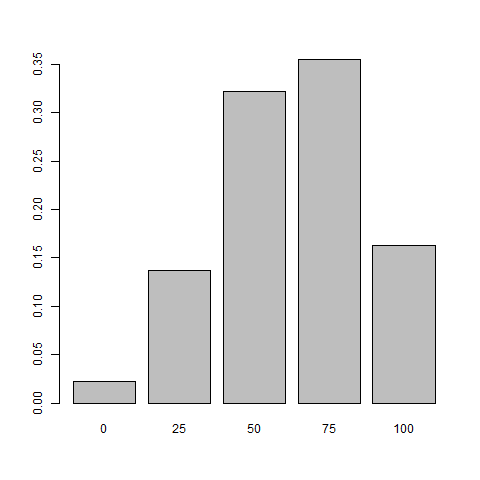 This shows that they will most likely share 50% or 75% of their genome.

Limitations of this analysis: It does not account for linkage of genes. It assumes totally independent assortment of the alleles. It models all similarities to be in alleles of different traits initially and then allows for same diploid pairs, i.e. it does not allow for the observed probabilities of forming a same diploid pair, i.e. case where the similarity (genomic sharing) between two individuals is because of two same alleles for the same trait. It is also blind to any parental imprinting. Homozygosity is not yet incorporated in the simulation, will do in a while.

Below is the two-generation probability simulation for an organism with 4 and 5 traits. 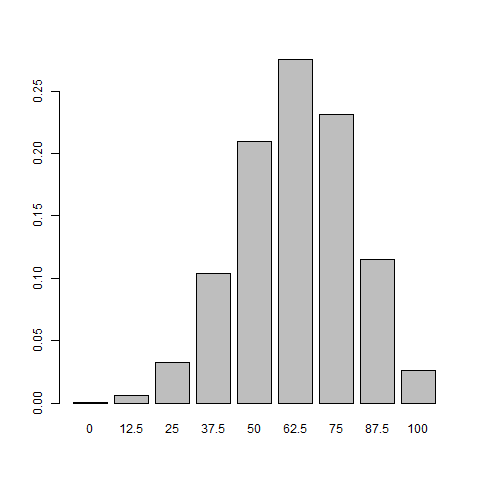 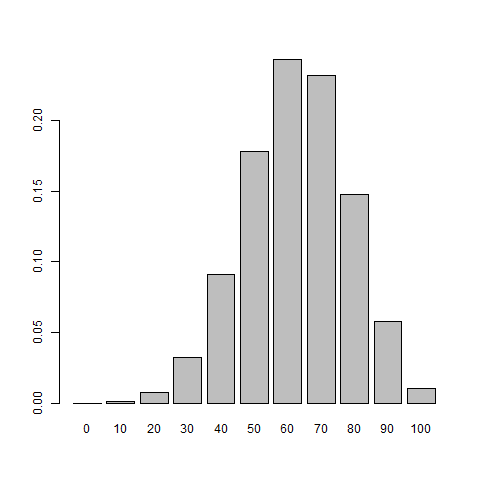 The maximum likelihood of %similarities in genome, as you can appreciate, for a large number of traits would be somewhere around 63-64%.

I shall post the R code in a while, after I format it properly. For computations for greater than 5 traits, I shall write a better engine in a day. Sorry for the improper formatting of the question. Shall rectify in a while.

7
On average how many genes / alleles do people share?
13
"Same" DNA vs genes
4
Proving time travel
6
In percentage, how much is the human genome (DNA) similar to the mouse genome?
1
Correlation between genetic distance and birth defects
1
Plants that are siblings: How does this impact pollination?
7
How can someone share 50% of their DNA with their parents yet all humans share 99.9%?
0
Method of determining base values of traits in isolated populations