Does class switching occur both in B cells and Plasma cells?

I understand that the cell class switches to change the type of immunoglobulin it is producing. The B-cell produces the membrane bound B-cell receptor (BCR) while the plasma cell produces the the secreted form of Ig, the antibody. Now, the isotypes are different in their constant regions and I'm assuming switching only matters if it is an antibody. (differences in avidity, permeability, antibody receptors, etc.)

How would a B-cell receptor (membrane bound Ig) even benefit from class switching? Does class switching even happen in activated B-cells? Or is it a process limited to plasma cells? I read up that BCR also has the 5 isotypes.

What are the specific chronological milestones at which class switching happens in plasma cells and B-cells (if it does)?

There are two important concepts addressed in the question. One is the Immunoglobulin structure - isotype and membrane/soluble type. And the other is the germinal centre B-cell paradigm. Understanding both the concepts are a prerequisite to understand the answer to the issue.

First of all, immunoglobulin synthesized by the lymphocyte can either be membrane bound (known as the B-cell receptor (BCR)) or soluble antibody. After gene rearrangements, the B-cell (still immature) begins to produce membrane bound IgM/IgD. This continues even in the mature B-cell. The membrane bound Ig or mIg has an extra sequence (refer image) on the carboxyl end adding a few hydrophobic amino acid sequences so that it gets anchored well in the hydrophobic part of the membrane. Also at the end is a series of hydrophilic residues involved in downstream cell signalling. 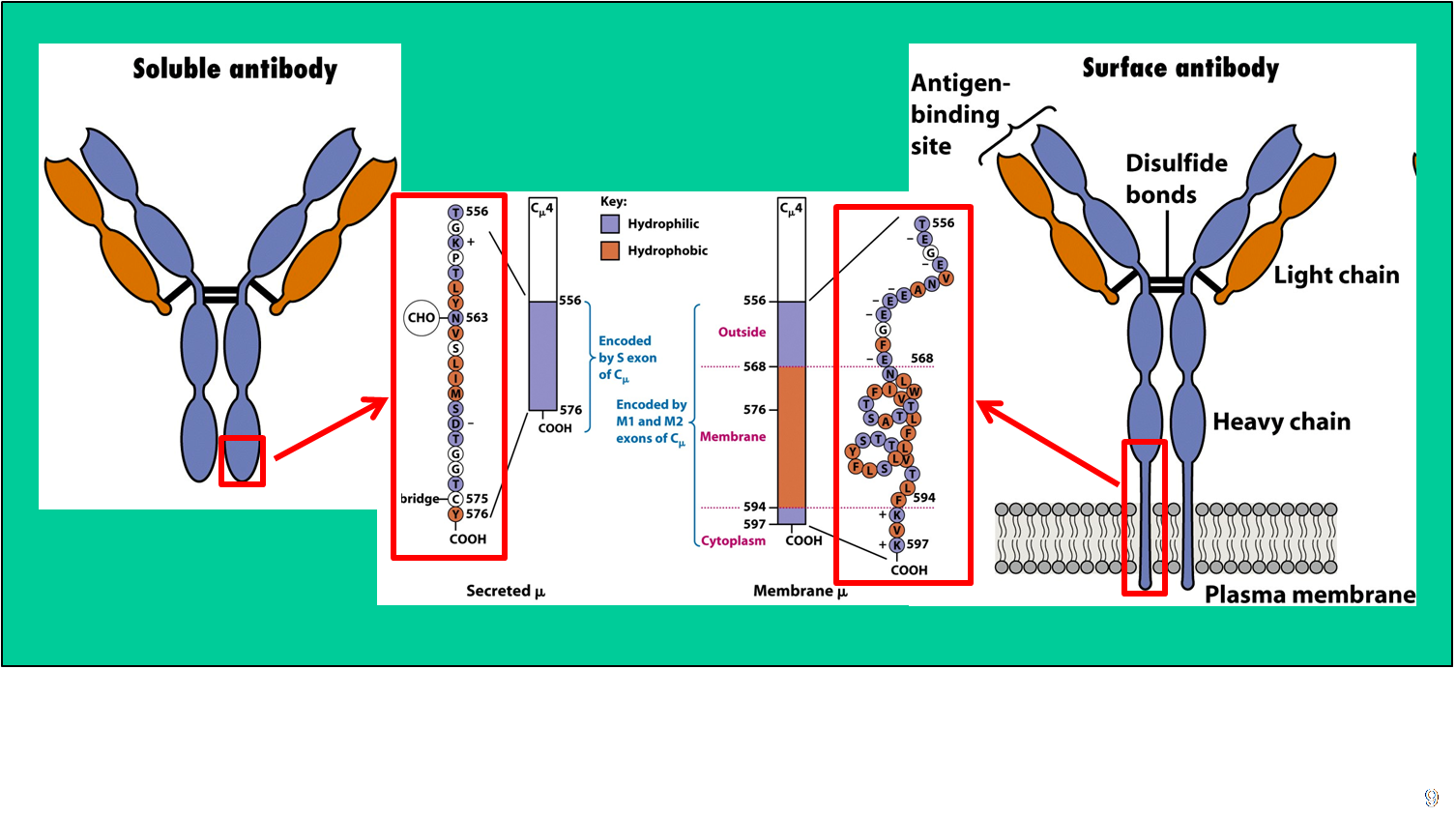 When there is a first time exposure to an antigen, the mature B-cells follow a classical paradigm to T-cell dependant antigens, which is shown in this picture below.

Class switching occurs in B cells that are participating in a germinal center reaction, after the naive B-cell has been activated by antigen and a cognate T cell. There also is germinal centre independant class switching that we ignore here.

After a B cell has undergone somatic hypermutation and class switching of its immunoglobulin gene, it may or may not be positively selected to differentiate into a plasmablast. Plasmablasts proliferate rapidly before terminal differentiation to plasma cells, which secrete affinity matured, class-switched antibody. So in other words, class switch recombination is largely restricted to activated, germinal center B cells. These B-cells class switch, as one of many processes to produce soluble antibody producing plasma cells.

Plasma cells and B-cells aren't just one and the same. B-cells undergo a series of processes to form the plasma cells which are also different in morphology. 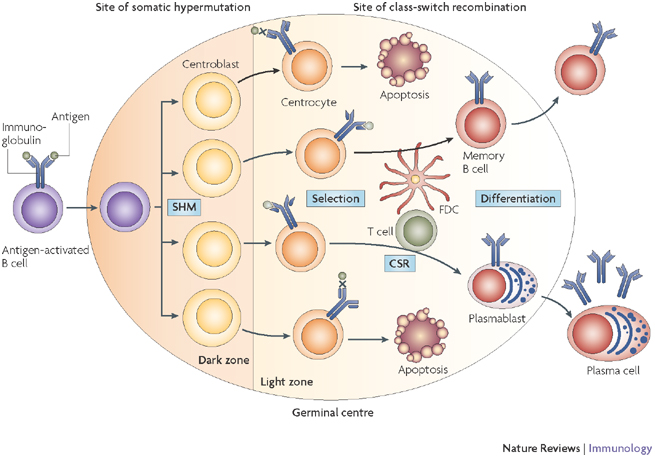 As already has been mentioned, it should be remembered that class switching involves excision of the intervening DNA between the rearranged VDJ exon and the constant exons being switched to, meaning that they are deleted from the allele. Thus, a B cell that has class switched from IgM to, say, IgG would delete the IgM and IgD heavy chain exons on that allele, and would be restricted to IgG (or IgE and IgA, which lie downstream).

But then, if the B cells bearing IgM had already class switched (to their possible downstream counterparts), how can the primary immune response be IgM dominant? How could IgM antibodies come from class switched plasma cells?

This is because, this whole germinal centre spectacle takes time to happen and in the meanwhile, there are extrafollicular mechanisms of antibody production in place in extrafollicular foci in the spleen or in the medullary cords of lymph nodes. Since antibodies that are develpoed in a germinal centre dependant manner (IgG) are from somatically hypermutated cells, they have more affinity to the antigen than IgM produced by germinal centre independant plasmablasts. 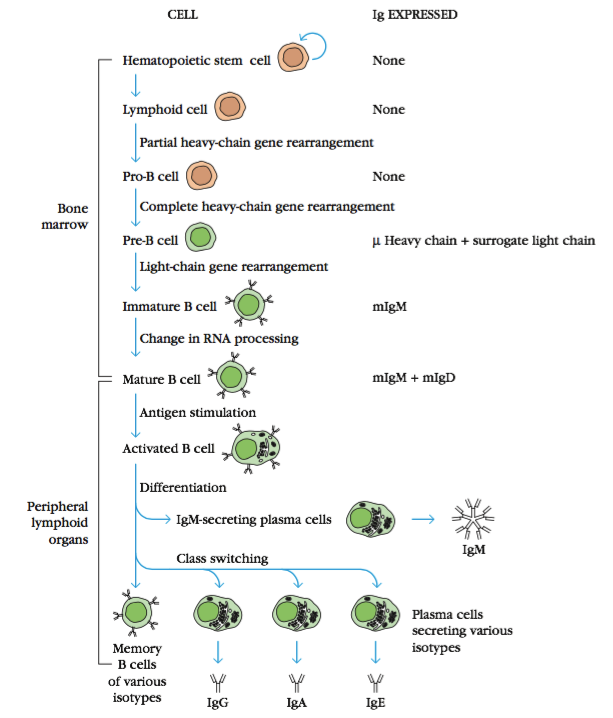 BCR generally has only two types, mIgM and mIgD. If there is a class switch, they turn to soluble antibodies (IgG/IgA/IgD).

Secretory antibody here refers to soluble antibody that is exocytosed from the WBCs, not the IgA that is found in bodily secretions.

Not the answer you're looking for? Browse other questions tagged immunology immunoglobin or ask your own question.

2
Is Plasmablast a precursor of Plasma cell?

5
What's the advantage of autocrine signalling?
4
Plasma cells and memory cells
2
How HIV Affects and Its Treatment using Combination Therapy
3
What cell types produce immunoglobins and where are those cells found?
3
How do B memory cells provide immunological memory? Do they differentiate into plasma cells?
6
Exocytosis of mast cell secretory granules
3
How specific is the adaptive immune response?
4
Specificity of the adaptive lymphocytes
6
what if there is a door for which our immune system has no key?
5
Why is the SARS-CoV-2 target receptor ACE2 not endocytosed when bound physiologically?