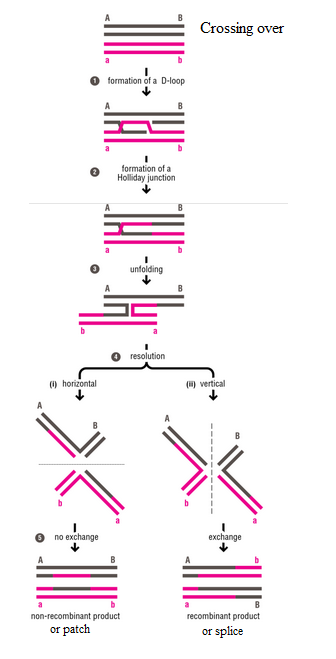 both had the same illustration and descrpition.

Heteroduplex called patch does not have double-stranded recombinant regions, there is a new fragment in a single strand only. It means that the two strands are not complementary at that regions and as soon as DNA repair systems detects it, the mistake will be corrected. In case of heteroduplex called splice, there are double-stranded changes, which do not go against the complementarity principle and thus, they will not be removed or corrected in any way.

After horizontal and vertical resolution patch and splice are formed respectively.

In patch the heteroduplexes formed have only a single stranded middle recombinant region which is not complimentary to the other strand when this is detected by the DNA repair system and corrected the duplexes formed are same as the original duplexes (before crossing over) so the products of horizontal resolution is called non-recombinant products.

In splice the heteroduplexes formed have double stranded recombinant segments with middle non complementary region which when detected and fixed by the cell's DNA repair system two duplexes are formed having recombinant DNA segments, so they are together called recombinant products. The recombination in splice is well represented by the reversal of terminal genes. 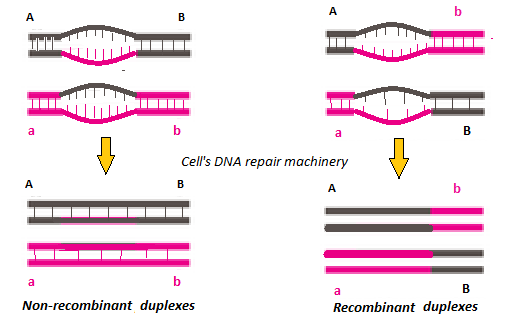 0
Heteroduplex and Products of cleavage of Holliday Junction (Resolution)

3
How does chromosome cross-over occur?
3
What is the purpose of back-crossing mice for multiple generations?
5
Is probability for double crossing over included in distance cM? [task]
2
Crossing white eyed Drosophila with sepia eye
5
Why doesn't crossing over happen in mitosis?
9
Do only one or both pairs of homologous chromatids exchange genetic material during the process of crossing over?
2
Crossing over and exon shuffling?
3
Why does crossing over take place at all?
3
How do gene locations change during crossing over events?