Why do people sing?

I was wondering the why people sing, but from a biological point of view. Is it necessary for our body? If it is so, then why can't everyone sing well?

Is it in direct relation with neurotransmitter secretion, like the adrenaline? Or is it only a way to express our emotions?

Is it necessary for our body?

Well, there can be many perspectives for why humans like singing. Let's talk about the evolutionary perspective first. I found three theories about why singing was evolutionarily beneficial for humans.

Anither perspective is the biological one. According to a Chicago Tribune article people who sing live longer than those who do not. Why? Singing stimulates better blood flow by increasing the efficiency of chest wall muscles in air exchange. Whenever you'd have tried to sing a nice song, you must have felt that you need to regulate your breathing in order to get nice tones. At one moment, have a huge breath-in, and the very next moment, release it slowly. All these help in increasing blood flow and thus, if you keep singing when you grow old, you would live longer!

If it is so, then why isn't everyone able to sing?

This has a very simple answer. The element that makes people sing poorly is problems with pitch accuracy, which is also called intonation. (Pitch can be understood as the ‘sharpness’ of a voice; female voices are typically higher pitched than male voices.)

Why Does This Happen? It all comes down to those tricky activities of the brain. The problem with the brain lies in not being able to adjust its activities against a particular target (which, in this case, is a particular tone). That may be a bit confusing, so let’s break it down a little further.

When you hear a tone, your brain has a perception of its various parameters, such as loudness, pitch, tone and so on. It turns out that human brains are pretty good at perceiving the right tone, which means that the possibility of an error in our brain’s perception of the tone is ruled out. Hence, the ‘input’ component in this case is alright; the problem occurs at the ‘output’. After hearing the tone, the brain maps out an output tone to match the one it heard, but sadly, it’s not in tune.

It’s not that you don’t realize when you are singing off-key; ears do register that you’re not quite producing the tone that you intended to, so the vocal cords ask for instructions from the brain. However, the brain still sends the same instructions, and you simply can’t get the tone right. It’s almost as though the vocal cords have locked themselves in a particular position to produce the same erroneous tone every time, even after knowing better! 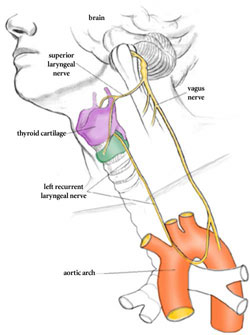 Is it in direct relation with neurotransmitter secretion like adrenaline?

Let me clear out some things here first. First of all, adrenaline is not a neurotransmitter, its a hormone (unless you're talking about adrenergic neurons). You can see the differences between neurotransmitters and hormones here.

Back to the question, serotonin might have an effect on singing. Serotonin is regarded by some researchers as a chemical that is responsible for maintaining mood balance, and that a deficit of serotonin leads to depression. However, its effect on singing is not known yet (at least I can't find a reference for such a study).

EDIT: Another neurotransmitter (which I forgot to mention ;) that plays some (if not all) role here is dopamine. Dopamine is considered as reward and pleasure chemical because it is released in areas of brain (like nucleus accumbens) to give a feeling of reward and pleasure. It has been suggested that dopamine, through the mesocorticolimbic pathway, gives a feeling of pleasure after singing. That is probably why we feel so nice when we hit the perfect tone in a song.

10
Why do humans hear better between 2kHz and 5kHz?
2
Why do birds sing?

4
In theory, would it be possible to create an injection of Vitamins, Minerals, sugars etc so that eating was no longer necessary?
3
Did the Britons 100 years ago have different intestinal flora and fauna?
5
Does eating hard food really cause wisdom teeth to erupt properly?