I was recently reading about non-coding RNAs being a counter example to Central Dogma of Biology. Can someone add more cases which violate the Central Dogma? Thanks!

Although the central dogma remains a core tenet of cellular and molecular biology, the appreciation of lncRNAs as functional genomic elements that defy the central dogma may be essential for fully under- standing biology and disease. [Iyer et al. Nature, 2015]

So, although in my comment I stated that the discovery of reverse transcriptase was the first violation of this — as was generally regarded — this turns out not to be the case.

I remember that the case of reverse transcriptase was felt to be different from the existence of RNA viruses because it involved the flow of information from RNA to genomic DNA, which were generally represented by a unidirectional arrow in the opposite direction in diagrams of the dogma. The following is a typical illustration of that, taken from some University lecture notes that I found on-line and which are described as:

These diagrams ..., created originally by Crick, summarize the basic processes of information transfer within cells.

But the NCBI collection of facimilies of Crick’s documents include a 1956 diagram that is quite different and much more sophisticated: 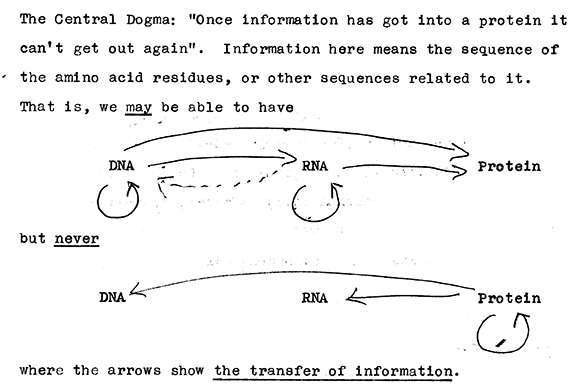 And, so the central dogma has not been violated (certainly not by lncRNAs), unless you consider that it has by prions, where information of sorts is transfered from protein to protein.

I’ve seen the DNA → Protein arrow repeated as if it were fact in diagrams, although Crick only said ‘may’. I know of no example of this.

The "Central Dogma" is an obsolete concept. It has no biological significance today. It's been outdated for decades since the discovery of reverse transcriptase, but it was never intended to be taken particularly seriously anyway; Crick deliberately gave it its portentous name as a provocative approach, to drive people to think more about the topic and look for the counterexamples he presumed were there.

Unfortunately, it seems that in some places -- notably India -- shoddy, ignorant teachers don't understand anything about modern biology and still believe that the Central Dogma has more than historical interest. It does not; it should not be taught in biology course, let alone treated as a testable concept, and any mention of it should be limited to History of Science courses.

Because it is an outdated concept that no longer matches modern biology, and because these ignorant teachers still try to squeeze it into their courses and tests, many students (again, especially from India) are very confused, thinking that their understanding is wrong because it contradicts the Central Dogma.

If you need to parrot something for an exam, I sympathize with you, but don't make the mistake of thinking that the Central Dogma is a real, relevant, modern biological concept.

The central dog is an old 1950s concept that is obsolete and should be removed from the text box of the 2010s. It states that the flow of information from DNA->RNA->protein is unidirectional

Telomerase... uses to elongate the ends of chromosomes from becoming shorter (something that occurs on the lagging strand of DNA during DNA synthesis) the shRNA used by this enzyme only encodes a few base pairs (6-8bp depending on kingdom)... but it is an example of RNA->DNA

RNA dependent RNA polymerase RNA-> RNA (No DNA is required to make more RNA). has been found in yeast.. with the role of maintaining the centromere... and likely will be found in humans too, since centromeric structure is believed to be conserved in the broad sense.

Prions. Where a prion serves as the template to cause a normal protein prion protein (PrPc) to undergo a change in folding and become the infectious prion (PrPsc). An example information in propagating between protein molecules. Protein-> protein

Then there is epigenetics... where proteins can leave methylation marks on genes (DNA)... changing the expression of the gene in an inheritable way. So information from proteins can flow upwards. While not DNA bases are changed, the DNA is modified. Protein -> DNA

There is also histone modification.. which can be inheritable depending on gene. But it is regulation of DNA by controlling how available that DNA is to being read by transcription machinery.

Then there is siRNA... which can and does modify gene activity. A weaker example of how information can flow from RNA -> DNA.

Next are proteins called cytidine deaminases. These proteins naturally convert cytidine to uracil. APOBEC modifies RNA.. creating a premature stop and thus a shorter APO-B protein with lower activity.. regulating lipid metabolism. So mRNA editing by APOBEC proteins changing the information in RNA aka Protein -> RNA. Next is AID, another cytidine deaminase but one that targets DNA. It used by the immune system to cause hypermutation and thus variation in the antibodies. A poor example of protein inducing genetic changes. Not controlled unlike the DNA methylation example.

Lastly there are ribozymes. RNA that have catalytic activity. So no need for the protein to catalyses a reaction.. RNA can do it on its own.

Not the answer you're looking for? Browse other questions tagged genetics molecular-biology philosophy-of-science or ask your own question.

2
Central of Dogma? reverse transcriptase says No
3
Are there any natural cases of direct translation of DNA to protein?
1
Is there any reason an arbitrary DNA sequence such as 5'-ACACACACAC-3' would not exist in nature?

4
What is “Peripheral Dogma”?
0
Estimation of cases with dominant inheritance
2
Can the central dogma work in reverse?
1
Why the major gene model can be supported by finding de novo mutations in affected cases?