Making sense out of the visual representation of transcription

Most people are familiar with the following diagram. Some genomic DNA with a promoter region, exons and introns. This is transcribed into RNA that is then translated into a polypeptide.

When we look closer at the strand that is being transcribed we can distinguish between the two as the sense and anti-sense strands.

So the transcription factors and RNA polymerase bind and begins transcribing mRNA in the 5' to 3' direction and thus reading the anti-sense strand in the 3' to 5' direction and have the same sequence as the sense DNA strand, substituting U for T in the mRNA. 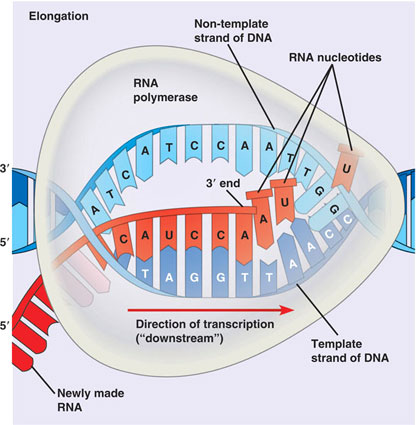 All visual representations and nearly all coordinate systems are based on the sense strand. The polymerase machinery has no clue about what is sense and what is antisense, because each is the antisense of the other.

For visual representation this makes much more sense and relays more information as it removes the extra complicated layer of information. And, in most cases the gene structures are declared in the order of the reference genome which is always the positive or sense strand.

Next coming to the bioinformatics part, most of your databases such as UCSC, Ensemble and NCBI maintain gene coordinates on the reference genome, But, there's a catch, when reporting the information through a bed file,

Negative stranded genes are reported as chromosome stop start by NCBI (last I used it was a one a half years ago), UCSC will provide the chromosome start stop and both will report the strandedness, UCSC expects that you the bioinformatician will create the reverse complement when you find the strand information, while NCBI expects that your program will fail a sanity check because stop - start will come as negative, implying that you cannot make a mistake while parsing NCBI bed files. Furthermore, UCSC indexes are maintained as 0 based, while NCBI is maintained as 1 based.

I would urge you to validate this information

But why not just keep a negative strand as well? while keeping the gene coordinates and elements for the antisense in the format you just mentioned.

Because speaking from a Computational point of view it just makes more sense, this system would consume more storage (please remember the entire system was formulated before storage became as cheap as it is today) it would consume more memory during tasks (exactly double of what it is consuming today). So it's just better to have a positive strand reference genome and all genes and elements based on that.

Just an example of how alignment of sequencing reads works,

Gene sequences are annotated in the sense strand. So, these diagrams are correct.

In the top diagram, the ATG start is on the left, and the stop codon is on the right. Exon one is the left most exon. That's all correctly illustrated. If you look up a transcript sequence in, say, ensembl, it will be the same way, the start sequence will be in the beginning, the stop codon at the end. That's the convention.

Not the answer you're looking for? Browse other questions tagged transcription or ask your own question.

9
On which strand does the promoter sit?
4
Stop codons and exons?
5
Do transcripts always start and end with exons?
1
Relationship between DNA strands and mRNA
0
Questions about RNA Polymerase
2
What makes/breaks the hydrogen bonds between DNA and RNA during transcription?
1
Does transcription terminate at the end of antibiotic resistance genes on the Duet expression plasmids?