Why are chromatophore in phaeyophycae chloroplasts integrated within the endoplasmic reticulum?

Why are chromatophore in phaeyophycae chloroplast integrated within the endoplasmic reticulum? While reading about phaeyophycae I came across this point, but couldn't figure out why and what could be the evolutionary basis for this?

Before explaining it, you need to know 2 things.

Fact 1: a cell of an Eukaryotic organism; such as a higher-plant, an animal, or a fungus, is actually not a single cell, but mixture of cells from different distant taxa.

taxon-1. The main, host cell (probably came from an archaebacteria (archaea) ), whose 'own' genetic material is in its nucleus.

taxon-2. mitochondria (probably derived from an eubacteria (only 'bacteria' of modern use) allied to proteobacteria) (found normally in all eukaryote, except a few )

It is now very well-established that mitochondria and plastids are 'cell'-s, with their own genetic machinery (including DNA, whose sequence match not-with host-nucleus, but match to bacteria!! However, some of DNA was probably got mixed with host-DNA, via DNA-transfer). They are partially autonomous because they can synthesize some proteins (metabolic-machines) from their own genes. And such an organelle can arise from pre-existing such-organelle, and can-Not appear de-novo from host cell.

Plausibly, many-many-million-years ago, the precursor of eukaryote , certain organism allied to archaebacteria, 'ate' (phagocyzed) these eubacteria , and instead digesting them, they involved in a mutually beneficial symbiosis. Gradually they get converted into some 'organelles' through millions of years.

This concept is known as 'Endosymbiotic theory of origin of eukaryotes' .

(Initially it was unknown,and it was thought that chloroplast and mitochondria evolved by gradual complication of the main cell. when Harry Margulis gave this as hypothesis, it was rejected because it was unbelievable. Later-on it was established as true)

Fact 2: The group 'algae', named in a very early-stage of science, was a horribly 'hotchpotch' group (extremely polyphyletic or artificial). This group is a set of organisms which can perform oxygenic photosynthesis. But some of them are similar to plants (green algae), some are highly similar to some protozoan ('primitive animals'), for say, some euglenoid and dinoflagellate algae. There are lots of such close-related protozoans that can't photosynthesize and don't contain any chloroplast. Whereas, Blue-green algae (cyanophytes) (with a highly similar photosynthetic mechanism), is a bacteria.

It was an enigma for the scientists. How a few members from separate groups can contain plastid? Could they separately evolved the same structure? Is it possible to coincide so-much convergent evolution? or if the common-ancestor of all of them, contained the plastid, then why that structure disappeared in so-many members?

This enigma was quite drastically cleared up after discovery of this past endosymbiotic mechanism.

It was then found-out that, the finest classification (excluding the chloroplast), which was showing the different groups under algae are highly unrelated; is true. Actually members from far-distant taxonomic groups, 'ate' some unrelated photosynthetic primary-endosymbiotic associations, and formed another association. Thus they all got the very-similar photosynthetic apparatus; though the hosts were unrelated. This was something very new-to science.

these 'another-association's, i.e symbiosis between impure cells, is known as secondary endosymbiosis.

It is assumed that, the trace of these secondary endosymbioses; left some remains as the plastid-coves' structure.

Here is a classification of algae, taken from Robert Edward Lee, Phycology, 4th edition, in a simplified diagram. 4 basic types of photosynthetic structure is found in algae, according-which the classification has been done.

.classification of algae, by Lee. (Representation concept courtesy- a note shared to me by a college- friend several-years ago).

Now, How these structures exactly developed?

Each cell contains so-many membranes, that , practically we have poor way to determine from which-of the membrane of which symbiont; certain ultimate membrane came. There are controversies. Such as according to Lee (already mentioned book) and diagram used by Hans Walter Heldt, Plant biochemistry, (3rd edition, Academic press- Elsevier), the outer membrane of chloroplast came from the cell-membrane of host-cell (phagocytic vesicle's boundary). like

Whereas some other source tells that, the outer cover of chloroplast came from "outer membrane" of cyanobacteria , (Since it is a gram-negative eubacteria, so carries 2 membrane). (Wikipedia tells "The two innermost lipid-bilayer membranes that surround all chloroplasts correspond to the outer and inner membranes of the ancestral cyanobacterium's gram negative cell wall, and not the phagosomal membrane from the host, which was probably lost." https://en.wikipedia.org/w/index.php?title=Chloroplast&oldid=737014760#Primary_endosymbiosis).

However in my answer I've followed Lee (4th edn). 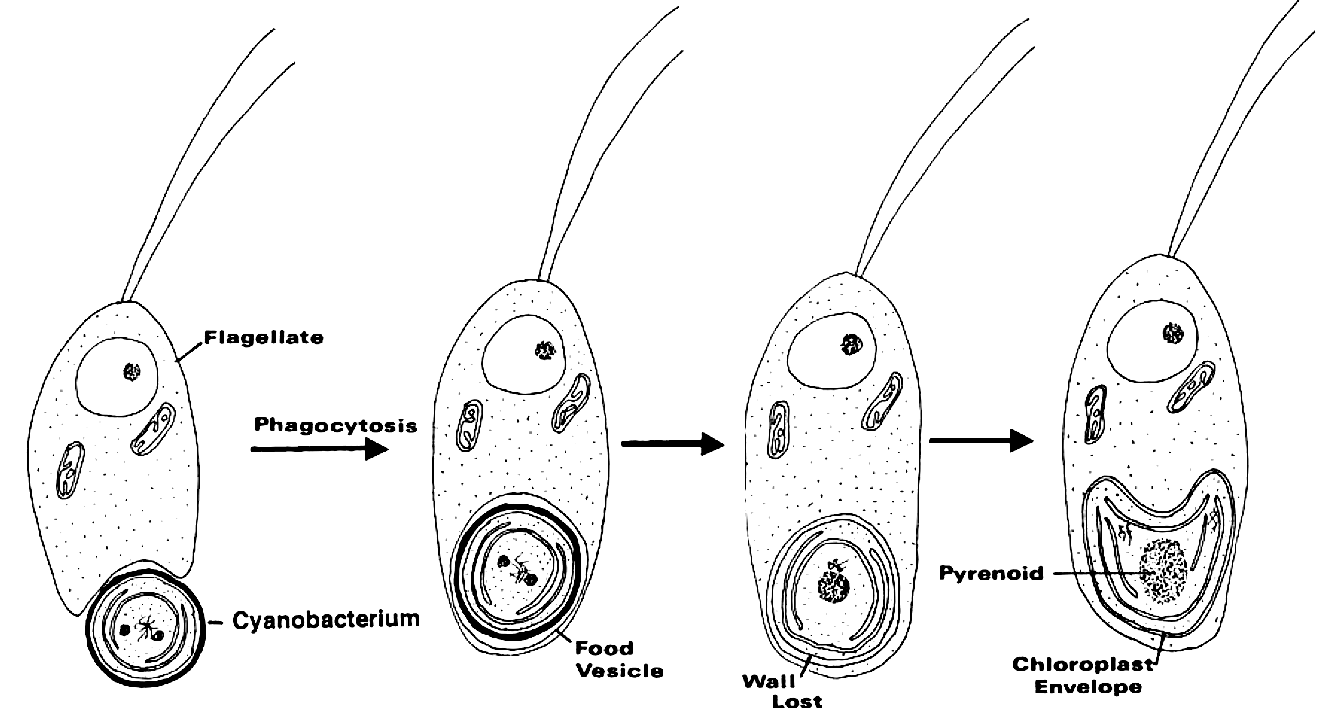 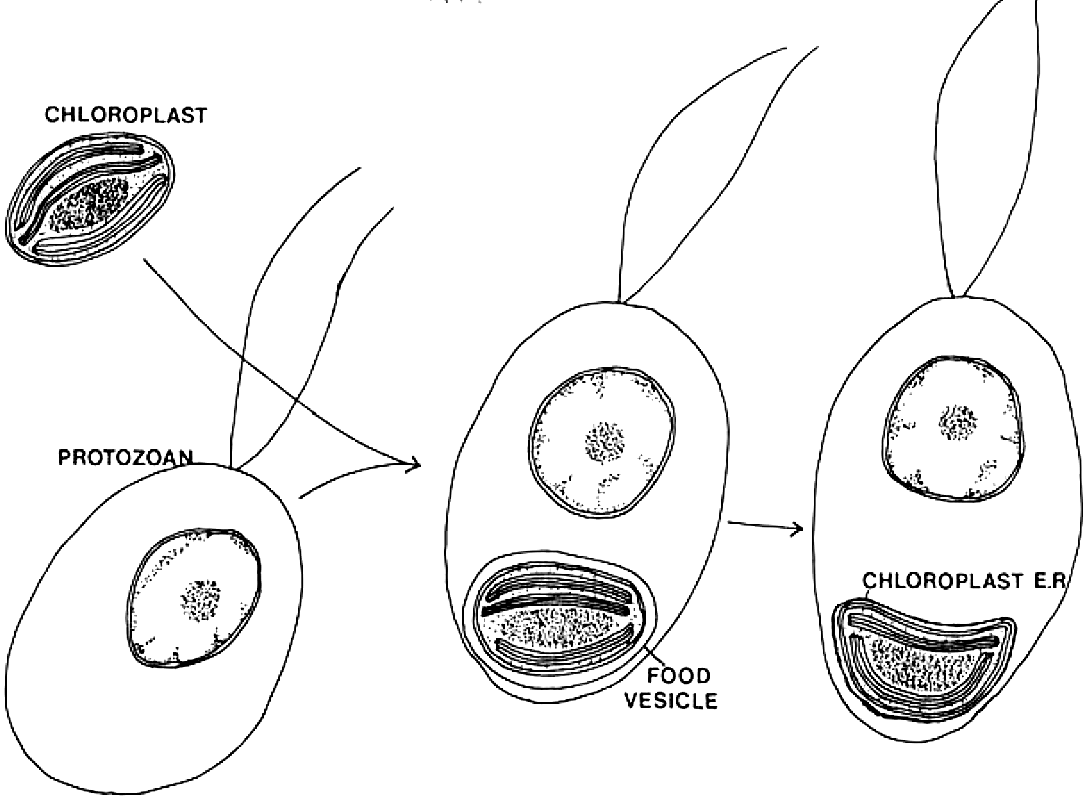 Products of this step found in Group-3 algae. 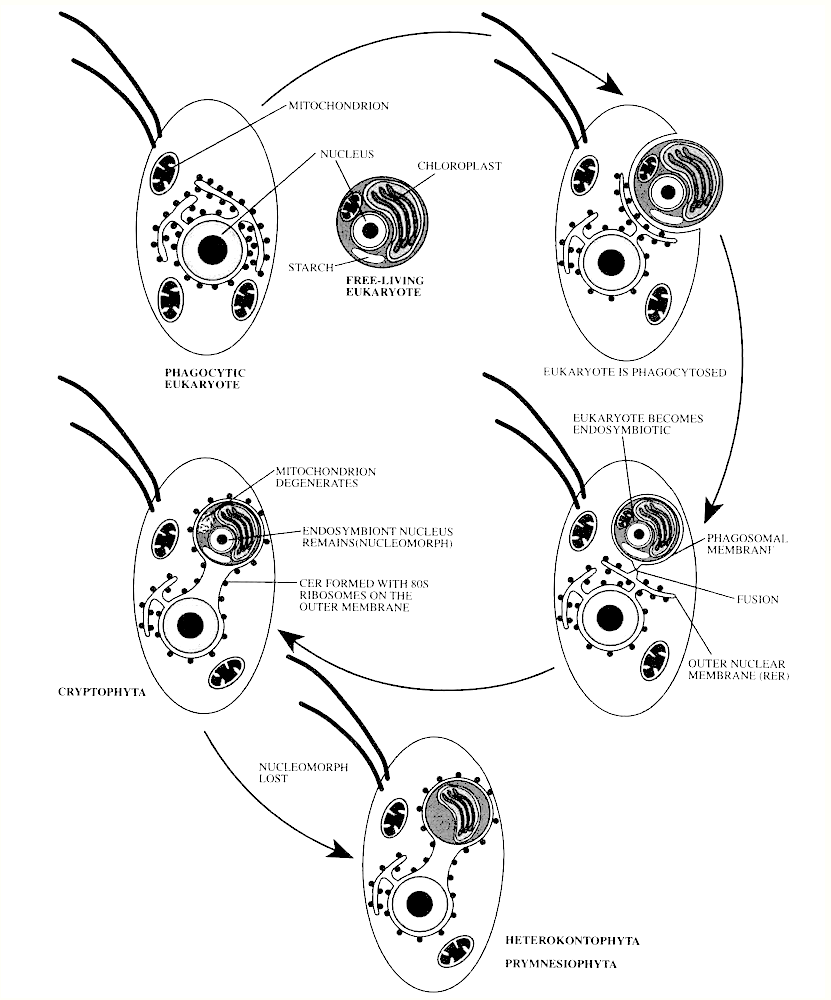 The sequence of events that led to the evolution of algae with two membranes of chloroplast endoplasmic reticulum.

Products of this-step found in group-4.

by the way, all these steps are assumptions by scientists.

Not the answer you're looking for? Browse other questions tagged evolution cell-biology microbiology plant-physiology phycology or ask your own question.

11
Why are men stronger than women?
6
How did the endoplasmic reticulum come to be?
1
Question about flux and changes in net flux of molecules across a membrane
6
Why are there no Nissl bodies in the axon?
4
Why do ribosomes associate with rough endoplasmic reticulum but not other membranes?
0
Is this sentence about RER correct on Wikipedia?
5
Darwin's views on Lamarckian Heredity?
1
Why does the DNA of Bacillus subtilis not contain DNA families of 20-37 members?
7
How does the Endoplasmic Reticulum scale with Cell Volume in Epithelial Cells?