Why do red blood cells maintain Iron in the Haem group in the +2 (ferrous) oxidation state?

A lot of sources tell me that RBCs contain a number of enzymes, and that these serve multiple functions from maintaining the structure and elasticity of the corpuscle wall, to preventing the oxidation of iron (ferrous) in Haemoglobin to the +3 Ferric state.

But what none of them say, is what problems (if any) arise when the iron is oxidised. Hence the question, why avoid the Ferric state?

I'm still a high-schooler and from what I've learnt, is that the higher the oxidation state of the cation, the higher its polarising power (Fajan's Rules) hence stronger the bond. So wouldn't iron in the Ferric state be able to bind with oxygen better, and isn't that desirable? ( Or is oxygen release to tissues going to be problematic? )

Q. “What problems (if any) arise when the iron is oxidised?”

A. Haemoglobin will be converted to methaemoglobin which cannot bind oxygen.

To quote from the article on Methaemoglobin in Wikipedia:

Methemoglobin (English: methaemoglobin) (pronounced "met-hemoglobin") is a form of the oxygen-carrying metalloprotein hemoglobin, in which the iron in the heme group is in the Fe3+ (ferric) state, not the Fe2+ (ferrous) of normal hemoglobin. Methemoglobin cannot bind oxygen, unlike oxyhemoglobin. It is bluish chocolate-brown in color. In human blood a trace amount of methemoglobin is normally produced spontaneously, but when present in excess the blood becomes abnormally dark bluish brown. The NADH-dependent enzyme methemoglobin reductase (diaphorase I) is responsible for converting methemoglobin back to hemoglobin.

“…the higher the oxidation state of the cation, the higher its polarising power… hence stronger the bond.So wouldn't iron in the Ferric state be able to bind with oxygen better…”

which can be transformed into:

The answer is chemically rather complex, but one thing you should be aware of is that in haemoglobin (and myoglobin) the oxygen Fe(II) is five-coordinated (as shown in the diagram below where Fe is black) and binds oxygen in the sixth position (to the right). 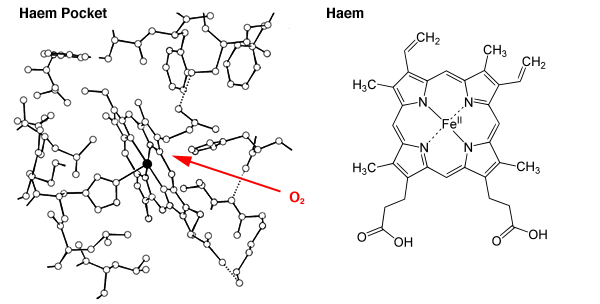 In simple terms, the electronic change in oxidation to Fe(III) causes a change in the geometry of the haem pocket such that oxygen no longer can bind (although now water can). This page elaborates the point, without providing a full chemical answer.

Some readers may be wondering why I have referred to the ferrous state of Fe in haem as Fe(II) and not Fe2+ (which the Wikipedia entry uses). This is to avoid implying that there is an overall charge of 2+ on haem groups in haemglobin and myoglobin. Inspection of the structure of haem (above) will show that the formation of two covalent bonds to imidazole nitrogens has left haem with a zero net charge.

what problems (if any) arise when the iron is oxidised: Nothing.

To state it simply: Hemoglobin is the oxygen transporter in the body. The oxygen binds to the iron in ferrous state in the hemoglobin molecule. Hemoglobin takes up O2 from the lungs and transports it to the peripheral tissues for their respiratory needs.

True, that according to the rules of chemical bonding oxygen would form a stronger bond with ferric than with ferrous. And this would sure be desirable if we were to only consider oxygen uptake. The oxygen loaded onto hemoglobin also needs to be unloaded in the tissues for their usage, which would be difficult with ferric iron. Hence oxyhemoblogin (Hb[Fe2+]+O2) transports oxygen While methemoglobin, oxidised hemoglobin, doesn’t. It’s rather bad for our body to have it more than it’s usual level i.e, 1% of total hemoglobin. And erythrocytes(RBC) have mechanisms to regulate the same. Hope this helps.

Because RBC'S contain certain enzymes which prevent the Oxidation of ferrus to ferric. Other reason is that ferrus is only capable of binding oxygen and not the ferric iron.That's why iron is present in ferrus form and not in ferric form.

Not the answer you're looking for? Browse other questions tagged biochemistry hematology red-blood-cell or ask your own question.