What is the half-life of dNTPs at 95⁰C?

I'm looking for the half-life of dNTPs, either as a whole or broken into individual bases, at 95 degrees C (or similar). A titration would be great if that exists. I can provide more specifics if need be, but broadly the idea would be 'able to polymerize' vs. 'unable'. Thanks in advance.

Caveat: ignoring the bonds between the different parts of dNTPs likely misrepresents the stability of the intact molecule, given that the covalent bonds between the nucleobase, sugar, and phosphate pieces each have their own relative stabilities.

In The stability of the RNA bases: implications for the origin of life, there is an Arrhenius plot showing the rate of decomposition of the most common nucleobases (A,T,C,G,U) at pH 7 in 50 mM phosphate buffer. According to one source, the pH of PCR buffer is between 8 and 9.5, though the authors of the paper linked above observe that the pH rate profile for the decomposition of purines (A,G) is relatively flat between pH 5 - 10. 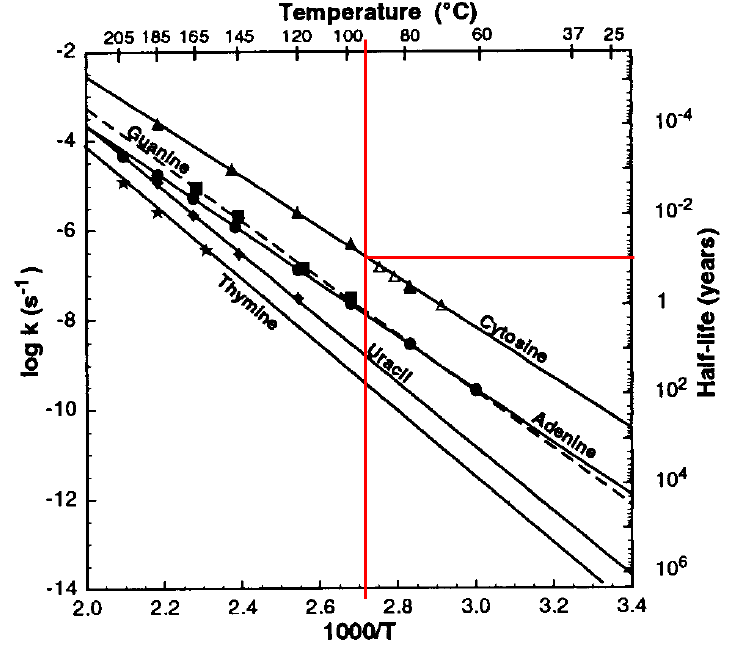 The same research group investigated the stability of the sugar moieties of nucleic acids in Rates of decomposition of ribose and other sugars: implications for chemical evolution. The analysis is slightly obscured by the use of deuterated water, though the authors observe that the rate of decomposition of ribose in H2O at 100° C and pH 7.0 is identical to that in D2O at 100° C and pD 7.4. 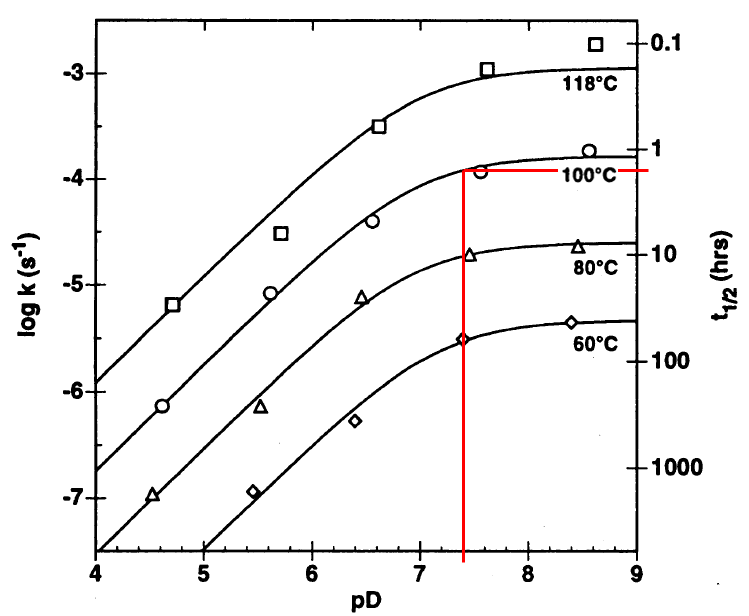 An older publication, The Hydrolysis of γ-Phenylpropyl Di- and Triphosphates, investigates the hydrolysis of nucleotide analogs at 95° C, over a pH range of 0.3 to 10. For the ATP analog, the rate of spontaneous hydrolysis to ADP is very low, 17.5 × 10−5 s−1 at pH ~5. Assuming first order kinetics, the half life of the triphosphate form is ~4000 seconds, or a little more than an hour at 95° C. In a buffered solution closer to a neutral pH, we can expect triphosphate to be even more stable.

A PCR with one 2-minute initial melting and 20 cycles with 15-second melt steps will expose dNTPs to 420 seconds at 95° C. Considering only the least stable component of the 3-component dNTP molecule outlined above and using the rate constant provided in the "Hydrolysis" paper, the equation for exponential decay can be used to calculate the proportion of unincorporated dNTPs that are still "polymerizable" at the end of cycling:

Not the answer you're looking for? Browse other questions tagged biochemistry molecular-biology or ask your own question.

3
H O N C alternatives for organic life?
3
Is the amount of dNTPs rate limiting for very long PCR products?
3
What is the difference between a polysaccharide and a macromolecule?
2
Don't the radioactive labeled molecules of dNTPs or DNA harm themselves or their surroundings?
2
Finding steady state concentration given half life and production rate
1
What does 'half life' of a protein mean?