Why can myopic eyes focus on nearby objects, but not on distant ones?

In myopic eyes, far away objects get blurry. I understand that myopia means that the focus of the lenses concentrates light at a point in front of the retina, thus by the point the light rays reach my retina they've already spread apart so they aren't coalescing on the same point as they ought to.

My question is, why is it that this deficiency only apparently manifests itself when things are far away? Why is it that the focusing of light in front of the retina doesn't cause the same blurry vision up-close as it does far-away?

myopia (nearsightedness): The eye ball is too long, or the cornea too steep, causing light to focus in front of the retina and making distant objects appear blurry.

hyperopia (farsightedness): The eye is too short, or the cornea too flat, causing light to focus behind the retina and making near objects appear blurry.

Astigmatism: is caused by an irregular cornea or lens, causing images both near and far to be distorted or blurry.

Presbyopia: a common age-related problem that is caused when the natural lens in the eye loses its elasticity, making it difficult to focus on near objects (hyperopia).

Focusing of the retinal image is mainly regulated through the process of accommodation (Fig. 2). Accommodation is mediated mainly by changes in the shape of the lens. A more globular lens results in a larger refraction of the light to focus on near objects. A flat lens refracts light less and is suited for focusing in the distance. 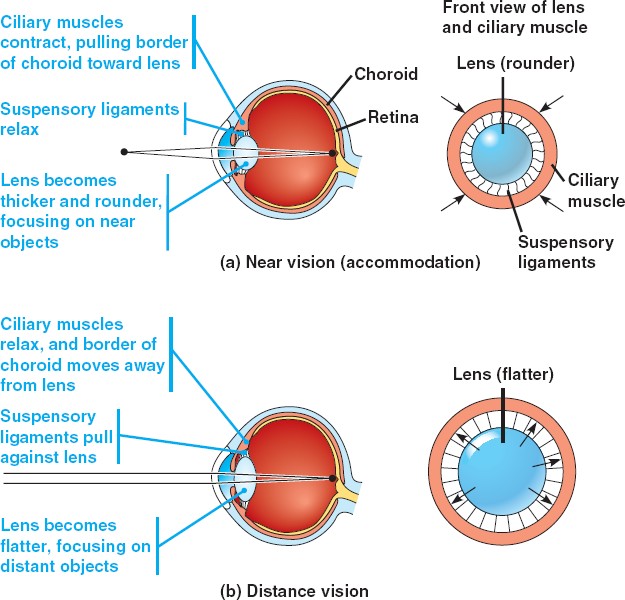 In the case of myopia, objects in the far distance are blurry. Objects far away tend to send near-parallel light rays onto the lens and the lens needs to be maximally flat and hence the ciliary muscles should be maximally relaxed. If in this case the image is still in front of the retina, the lens cannot relax any further and hence the image is blurry. Because there is enough dynamic range for the ciliary muscles to contract, there is not any problem with objects close by, because the lens is perfectly capable of assuming a concave (fat) shape.

Not the answer you're looking for? Browse other questions tagged vision eyes or ask your own question.

13
Why can't ciliary muscles in the human eye relax like other muscles?
12
What's the minimum distance of focus for the lens of a human eye to reach maximum flatness?
5
What is the focus distance of a 3D screen?
2
Like size and colour constancy, why does the brain not maintain focus constancy?
2
What is the difference between myopia and hyperopia?
0
Myopia & the Blur Effect
1
Why is 450 nm monochromatic light perceived as blue or violet depending on its intensity?
2
Is chromatic aberration related to the spectral sensitivity of the human eye and can it cause "relative myopia" and "relative farsightedness"?