Is Thyroxine a hormone?

I have read the phrase 'T3 is three to four times more potent than T4' several times both in books and websites. But isn't T4 a prohormone of T3? Why do then these sources talk about its potency as a hormone(I suppose)?

It is necessary to distinguish between classical and non-classical actions of thyroid hormones.

Classical action involves nuclear THR (or TR) receptors (TR alpha1, TR beta1, TR beta2). They are activated by T3, 3,5-T2, TRIAC and 3,5-DIAC, and blocked by rT3 and rTRIAC. T4 and TETRAC hardly have an effect on nuclear thyroid hormone receptors, but they are converted in the periphery and in target tissues by deiodinases to T3 and 3,5-T2, and TRIAC and 3,5-DIAC, respectively. From the classical perspective, T4 and TETRAC are therefore prohormones and not hormones in the narrower sense.

Non-classical action denotes binding of thyroid hormones to integrin receptors on the cell membrane. The resulting non-genomic actions may be directly mediated by T4 and TETRAC and don't require deiodination. From the non-classical perspective T4 and TETRAC are hormones sensu stricto. 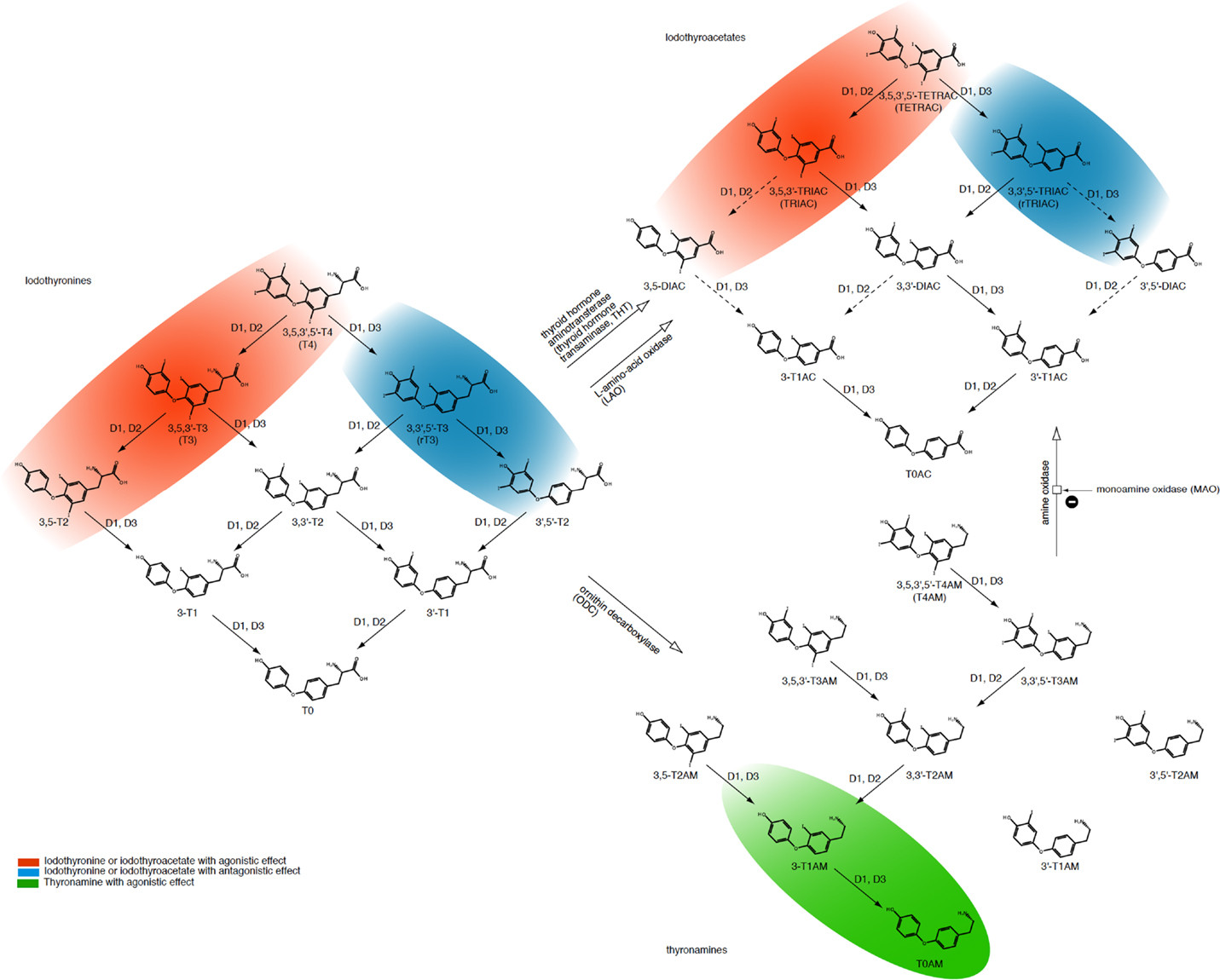 Both T3 and T4 are functional in human body...T3 being only more potent. Both of them fulfill the features of being a hormone, in fact both of them serve the same function in human body. Yes, T4 produces T3 in the peripheral circulation, so you can say it is a pro-hormone of T3, but that dosen't remove it from the hormones. Another example is Angiotensin I which is a pro-hormone (besides itself being a hormone) of Angiotensin II. There are so many other examples.

I don’t know, but I suspect that T4 was characterized first and fulfils the classic definition of a hormone being secreted by a gland and carried in the blood to its target.

Potency is the measure of some biological or biochemical assay of the effect of these agents in the target tissue, so that you can talk about potency regardless of other attributes of a molecule.

Even when it was established later (I presume) that T4 is converted to T3 in the target tissue, and T3 is very active, the possibility would have existed that this conversion might only be partial (there will presumably always be some T4 present there) and the question arises whether both of these molecules have biological activity and function. The results of measurements of ‘potency’ are part of the argument or consideration as to whether T4 is just a precursor or also an agent in its own right.

I think the thing to bear in mind is although you might read nice clear-cut statements in text books and the like, the observations on which they are based are often not so clear-cut, so authors are being both prudent and scientific in presenting the data to the reader.

Finally, there is the question of semantics. Even if T4 is completely converted to T3 in the target tissue, you could still say that it is a hormone because it is secreted by an endocrine gland, passes in the blood to a target tissue where it has an effect. The fact that its effect requires it to be modified in the tissue doesn’t invalidate its description as a molecule that has an effect on a target tissue. So on that basis you can justify calling it a hormone (as well as a prohormone). I also suspect there may be historical reasons for retaining the description.

Both T3 and T4 are hormones produced by thyroid. The difference between the two is the presence of 3 reps. 4 iodine atoms. Hormones usually work only on specific cells, by interactions to specific receptors. These receptors may be found on cellular membrane, intracellular, on nuclear membrane or even inside the nucleus. So, to answer your question, T3 is more potent with reference to T4 hormone for the fact that only T3 can enter the nucleus of the cell. Therefore T4 must be reduced to T3 to generate a nuclear answer.

7
Biological Pathway of Lipid Hypothesis
3
Steroid Hormone Signalling
5
Do hormones make men think of sex?
6
Renin - enzyme or hormone?
0
estradiol hormone role
8
If so many different hormones/molecules work by activating adenylyl cyclase, how do they have different effects?
3
Link between pornography abstinence and hormone levels
1
Why isn't there T2 thyroid hormone?