What do blue cone cells add to visual function?

First of all, I saw this other question in the SE sites with a good answer, but I didn't find an explanation about the blue cones specifically.

So most human beings have 3 types of cones (cells specialized in color sensing : blue, green and red).
While it may seem obvious that the red and green-sensing cones are an evolutionary advantage (given our natural environment and how we ate for millenia), for instance to locate fruits and differentiate ripeness, I can't find a clear advantage in having the blue cones. Blue doesn't seem to relate to anything like food, predators, sexuality. Am I missing an obvious utility ?

Let's try to imagine what happens if we remove blue cones :

I have the reflex to think "if a character is widespread, there must be a good reason". It seems I should rather say "there must be an explanation".

So I'm trying to think differently, and here are other possible approaches to address this question :

ADDITION : here is a visual example to see what happens if we remove blue information from an image (original image taken here). The image without any blue (middle) is confusing because it makes you think we could see yellow (while yellow wouldn't be different from white). That's why I added the image on the right, containing only information from red and green channels (the blue channel is replaced by min(Red,Green)). I think it illustrates well that blue isn't important, at least for vegetables and fruits !

Short answer
Primate color vision started off with photosensitive cells detecting medium to long wavelengths (M/L cones detecting greens and reds) and short wavelengths (S cones most sensitive to blue). By neurophysiologically weighing their relative contributions the full spectrum (red, orange, yellow, green, blue and indigo) can be detected by dichromats. Addition of a slightly different M/L cone and generating separate M and L cones increases the resolution of color vision in the medium and long wavelengths, which is thought to enhance color discrimination useful for foraging fruits. Indeed, blue in itself is not needed for this task. However, missing the blue cones would eliminate a large proportion of the visual spectrum.

Later in evolution, some diurnal species had a gene duplication on their X chromosome, generating a M/L duplicate gene (Jacobs, 2009). Small mutations in these genes eventually paved the way for two closely related M/L opsins, namely one a little more sensitive to longer wavelengths (L opsin) and one to slightly shorter wavelengths (M opsin). The dynamic range of color vision still depends heavily on the S opsin in the blue cones, as the M and L opsins have absorbance spectra much closer to each other (Fig. 1). The benefit of two opsins with nearly identical absorbance spectra is a higher color discrimination ability (higher color resolution) in the medium to long wavelengths. High discriminating power in the red-yellow-green part of the spectrum is thought to be beneficial for diurnal fruit foraging primate species (Jacobs, 1996). Note that cones need a lot of photons to operate; nocturnal primates are typically dichromats and they will not benefit anyway from another M/L cone.

For fruit foraging alone, the L and M cones do a pretty good job, as your example shows. However, there is more to the eye than food alone. Eliminating the blue cones would substantially narrow down the dynamic range of color vision. Further, evolution started off with S and L/M cones and added another M/L cone to that existing system. Evolution didn't start off with a blind ape and the goal to generate the perfect fruit forager; no it started off with a dichromat and over time improved its ability to seek food during daylight. 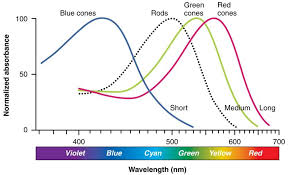 14
Is our color vision calibrated to sky, vegetation, and blood?

5
Can the negative afterimage appear only if there is light or is it possible in darkness?
14
Is our color vision calibrated to sky, vegetation, and blood?
13
Can "red" cone cells actually see much red light?
4
Why do we see a different color when we mix two colors?
4
How do S and L cone cells sense colors like deep blue and red beyond their peak?
11
Do colour blind people see white?
25
Why does my room suddenly look 'reddish'? My eyes seem to adapt to color
2
What photoreceptors are necessary to permit infrared vision?
5
Do Colorblind People Have Stronger Sensitivity in Their Other Remaining Cones?
0
Would green light look different if blue and red cones were deactivated