How is propagation of action potentials terminated once the “message” has been sent/received?

I'm thinking about neurons in the brain that are used for "thinking". As I read about action potentials, I see that an Axon is connected to a Dendrite of a neighboring cell and that there are neurotransmitters involved in the signal propagation from cell to cell.

I'm not a Neurologist or Neuroscientist, so I can only share what I know about the subject!

It's important to note, first and foremost, that a cessation of stimulation will result in a cessation of the propagation. This is one of the simplest ways that neurons can stop firing - you're no longer touching, tasting, hearing, seeing, smelling, or thinking of what you were previously.

Because of the way Neurons are constructed, and as far as I'm aware, signal propagation will persist as far down the line as possible. I don't believe there's a discrete point where an Axon will simply not send a signal once a dendrite on the same neuron has received the order.

What can happen is that a competing signal has exhausted the propagation potential for the next neuron in the chain (the neuron is still recovering), or a competing signal has released inhibitors that prevents the neurotransmitters from another Axon from affecting the target neuron. Competing signals is particularly common in the neurons of your eye, since the Amacrine cells fire depending on the competitive input of the Cones if I'm remembering everything correctly. 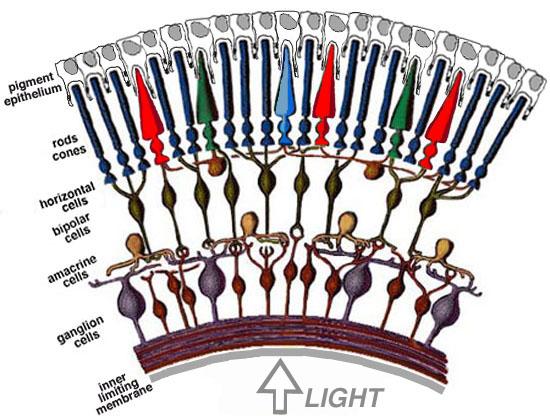 Then there are also substances like Benzodiazepines which block propagation by opening Cl- channels and hyperpolarizing a neuron's membrane, which prevents it from firing. Only a subset of GABA receptors have sites for benzodiazepines, but it's one more way that signals will cease.

Another way to cease a signal, or at least the perception of a signal, is to actually induce propagation. The Rods in your eyes only fire below a certain lumination threshold. What you perceive as light is them not firing, and darkness is what happens when Rods fire at full strength.

I'm not the last word on neurobiology, but I hope I've given you a good start!

The neuron doesn't need to know "not to "route"" an AP because this is not necessarily it's default response.

Upon receiving an AP from another neuron (via either an a chemical synapse or a gap junction) the next neuron receives a signal. The nature of this signal depends on the nature of the connection between the two neurons - the proteins and neurotransmitters involved - and is therefore context specific. Also context specific is the sensitivity of the receiving cell. If the connection is strong and activating and the receiving neuron is sensitive, then it will fire and the AP would be "routed" as in your question.

However, there are other possibilities. For instance, the connection may too weak, such that it can only activate the receiving neuron given sustained activity, or in conjunction with another neuron (in effect forming an AND logic gate). The connection may also be inhibitory - meaning that it deactivates, rather than activates the neurons.

Analogies between neurons and electronic systems are useful, but it's important to remember just how drastic a simplification they are. Individual synapses are complex. Cells have thousands of them, and a good deal of other moving parts besides.

I just came across this answer when I was answering another related question. Although this is closed there is a strong claim from the accepted answer which needs to be toned down.

Cessation of stimulation does not always mean cessation of propagation. Once an action potential(AP) is fired it does not necessarily stop its propagation in the next cell. Also cells can make synapses onto themselves which can cause further AP firing without stimulation.

5
What protocol does the nervous system use?