What is the mechanism of bending of myosin head during the power stroke of the cross-bridge cycle of the muscle contraction? Does this have anything to do with the protein's 3-D structure i.e. folding of protein in space? I would prefer a physics explanation down to either the classical electrical dipole or quantum mechanical interaction amongst the proteins. I want to know what exactly produces the force that powers the bending. I am pretty sure that the force can only be electromagnetic. The question is how the force is manifested in the bending. Any references for further reading are appreciated.

This is going to be quite a long answer. To have an introduction to the topic, you can have a look at articles from Wikipedia and RCSB Protein Data Bank.

The exact mechanism of physical interactions in myosin head during powerstroke cycle are not yet known. The only thing we definitely know about how release of Pi from myosin causes conformational changes (and hence, force) in it, as given at MJC website is: 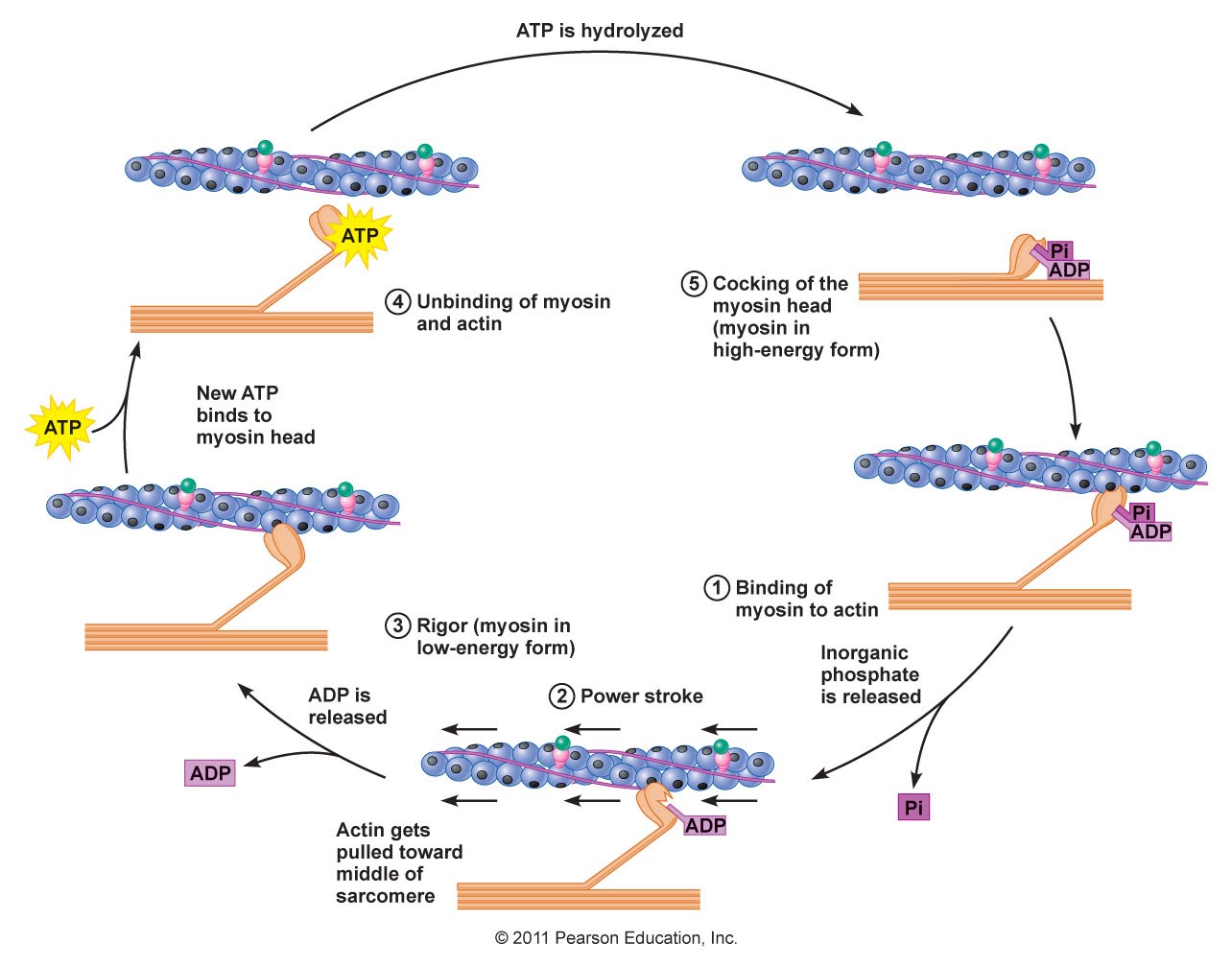 This is a very basic description of the powerstroke cycle, so we'll move ahead for more detailed explanation of physical interactions during the cycle.

I have found three theories regarding physical interactions during the powerstroke cycle. Let's discuss them one by one.

THEORY 1: I could not find much explanation about physics of the cycle, the only thing I could find was at the JBC website (emphasis mine):

Mutation R759E in the myosin converter domain results in biochemical and biophysical defects as well as aberrant muscle structural and physiological properties. The central portion of the converter domain is encoded by exon 11e in indirect flight muscle (Fig., green), and the converter interfaces with the exon 9a-encoded relay domain (Fig., blue). Molecular modeling indicated that residues 508–511 in the relay loop are located near the converter residue 759 and defined weak and strong interactions of residues 509 and 511 during the rearrangements of the relay loop that are affiliated with the mechanochemical cycle. Furthermore, Ile508 can be cross-linked to Arg759 in Dictyostelium non-muscle myosin II when they are each substituted by cysteine. Therefore, we hypothesized that specific amino acids in the relay domain interact with converter residue 759 and that second site mutations in the relay residues may suppress the defects associated with converter mutation R759E.

They couldn't give much explanation of the physics involved in it. Maybe this is because I missed it or because there hasn't been much research on this because Dissecting the molecular mechanism of muscle myosin function in vivo has proved difficult. as said at JBC website.

THEORY 2: This theory, given at PNAS, provides a more detailed view of the physics, so we'll have a more thorough explanation of it:

Molecular motors produce force when they interact with their cellular tracks. For myosin motors, the primary force-generating state has MgADP tightly bound, whereas myosin is strongly bound to actin. We have generated an 8-Å cryoEM reconstruction of this state for myosin V and used molecular dynamics flexed fitting for model building. We compare this state to the subsequent state on actin (Rigor). The ADP-bound structure reveals that the actin-binding cleft is closed, even though MgADP is tightly bound. This state is accomplished by a previously unseen conformation of the $\beta$-sheet underlying the nucleotide pocket. The transition from the force-generating ADP state to Rigor requires a 9.5° rotation of the myosin lever arm, coupled to a $\beta$-sheet rearrangement. Thus, the structure reveals the detailed rearrangements underlying myosin force generation as well as the basis of strain-dependent ADP release that is essential for processive myosins, such as myosin V.

Just so that you know what it is, let me add a few points about Molecular Dynamics Flexible Fitting:

The molecular dynamics flexible fitting (MDFF) method can be used to flexibly fit atomic structures into density maps. The method consists of adding external forces proportional to the gradient of the density map into a molecular dynamics (MD) simulation of the atomic structure. For examples of MDFF applications, visit the websites on Mechanisms of Protein Synthesis by the Ribosome, Dynamics of Protein Translocation, Molecular Dynamics of Viruses, and Intrinsic Curvature Properties of Photosynthetic Proteins in Chromatophore.

The equilibrium and rates of transition between the Strong-ADP and the Rigor states vary greatly among different myosin isoforms and predominantly determine how long a myosin motor can remain bound to actin in the absence of load. This kinetic tuning must be achieved by structural differences in the regions that we have seen to change in our Strong-ADP structure as well as regions involved in stabilizing the lever arm position...Our structures show that the Loop 1 conformation alters in the transition from Strong-ADP to Rigor. Thus, different sequences likely favor one conformation over the other, or promote the transition from the ADP-bound conformation to the Rigor conformation, providing a structural basis for this kinetic tuning.

For myosins, such as myosin V, that function in a cell as two-headed, processive motors, the length of processive runs and the initiation of processive runs are both enhanced by “gating” of the heads. For a two-headed molecule with both heads simultaneously attached to actin, gating refers to the fact that a lead head is essentially stalled in an ADP state strongly bound to actin, until the rear head is detached from actin by binding MgATP. This gating is attributable to the strain dependence of MgADP release. Although we do not know whether some of the subdomains of myosin may be deformed by strain, our Strong-MgADP actomyosin structure clearly reveals that strain must prevent the rearrangement of the $\beta$-sheet from the Strong-MgADP conformation to the Rigor conformation, based on the data presented in Results. Preventing this rearrangement is thus the basis of gating.

For better understanding, you should also see this video (same website) which shows animation of different conformations of myosin in different stages of the cycle: 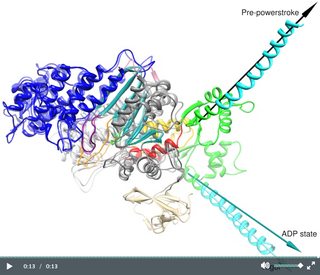 The transitions are animated by direct morphing between the three structures Pre-Power Stroke (PPS), ADP state, and Rigor. Starting with the PPS conformation, myosin first rearranges to allow phosphate release without much change in its lever arm. Then, the first step of the powerstroke consists of a large swing of ∼58° of the lever arm toward the ADP state. The actin-binding cleft [between the U50 (blue) and L50 (white) subdomains] is closing for this transition, leading to the only state of the actomyosin cycle, which exhibits high affinity for both actin and the nucleotide. The second step of the powerstroke occurs upon ADP release and ends in the Rigor state after an additional lever arm swing of 9.5°.

THEORY 3: This theory gives even more detailed, but a bit different from the previous one, view about how the energy, released by ATP hydrolysis, is stored in myosin head. It is called Rotation-Twist-Tilt (RTT) energy storage mechanism. See this:

According to the mechanism, ATP hydrolysis in the catalytic site rotates the top of the regulatory domain, which, being connected to the coiled coils of the S-2 region, causes twist between them to increase, and leads to the twist in the myosin head. Since, at the time of hydrolysis, the myosin molecule is not bound to the actin filament, the head is free to rotate and tilt. The increase in twist is instrumental in storing the energy of ATP hydrolysis, while the rotation and tilt of the myosin head brings it sufficiently close to the actin so as to form the actomyosin complex. Untwisting of the coiled coils and the subsequent untilting and constrained reversal of rotation of the head cause the power stroke. This strain decreases the energy of interaction between actin and myosin and thus enables ATP to dissociate myosin from actin. The system is now in such a state that after the next ATP hydrolysis event, the myosin head can bind to actin, and thus, a new contractile cycle can be initiated.

The original paper of RTT mechanism (by Nath and Khurana, 2001) is available here. Since the detailed mechanism is too long, I am not posting it here. You can read the full process, just remember to have a pen and paper with you! 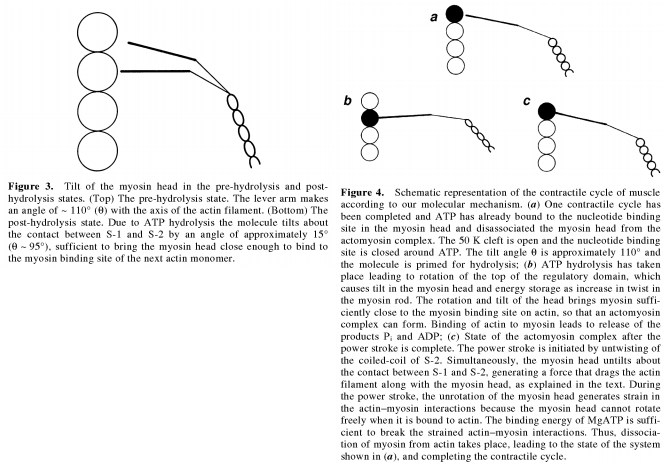 All of the above theories provide an in-depth view of the powerstroke cycle. However, I'd still conclude that the exact physics behind the powerstroke cycle is not yet fully known, only the transitions in conformation of myosin head have been observed and interpreted to some extent.

Not the answer you're looking for? Browse other questions tagged biochemistry biophysics muscles protein-folding or ask your own question.