Does light from the left visual field reach the temporal left retina?

The optic fibers from the nasal parts of the retina cross, whereas the fibers from the temporal hemispheres don't. This configuration leads to the projection of the left visual field to the right occipital cortex and vice versa.

My question is, why can't light from the left visual field reach the temporal left retina and vice versa? I have illustrated this in the picture below with blue arrows. 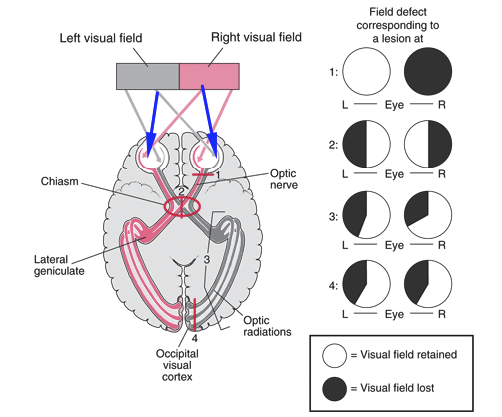 Obviously, if it would, it would interfere with the normal pattern of projection. Now my question is what prevents light from the left field of view reach the left temporal retina? Or is there some overlap between the visual fields?

Fig. 2 below shows why only a certain part of the visual fields overlap. Firstly, the retina has a finite size and secondly, the anatomical location of the pupils restricts the angles of the visual field. The most eccentric parts of the left visual field simply cannot reach the temporal left retina (and vice versa), because the angle of the pupil with respect to the retina simply doesn't allow for it. The same holds for the most central part of the left FOV, which cannot reach the nasal part of the right retina; it can only project to the the temporal right retina because of the restrictions due to the localization of the pupil, the retinal size limitations, as well as the nose blocking a certain part of the FOV.

Not the answer you're looking for? Browse other questions tagged human-biology neuroscience vision neuroanatomy visual-system or ask your own question.

6
How does the frequency of a visual stimulus affect the steady-state visually evoked potential?
9
How long does a signal from the brain take to reach the limbs?
3
Does 405 nm light set off phosphorescence in the eye?
4
Do low light levels during development affect the distribution of rods and cones in the retina?
11
Why does closing one eye in bright light allow me to open the other?
2
Where does the initial action potential come from?
3
What parts of the visual system could be responsible for a fixed, monocular scotoma?
0
Does opponent process happen in the retina or in the brain?