Difference between mice and rats

What is the actual biological difference between mice and rats? Are they actually the same thing with two different names depending on appearance (are they all mice for instance and we call the larger ones rats or vice versa) or is there some fundamental difference in their genetics?

Mice (Mus) and rats (Rattus) are definitely separate species, by whichever definition of species you choose to use. They are genetically distinct, and both genera are members of the clade Muridae, along with Acomys ("spiny mice") and Gerbillus ("gerbils").

Moreover, what we call colloquially "mice" and "rats" encompass a great deal of variation within rodents. The genus Mus is one of several subgenera with ~15 species.

A recent phylogenetic study of rodents by Blanga-Kanfi et al. (2009), revealed that Mus and Rattus are sister groups, meaning that each is the other's closest relative. The image below from the paper above shows the complete tree. Muridae is about 2/3 of the way down in blue. 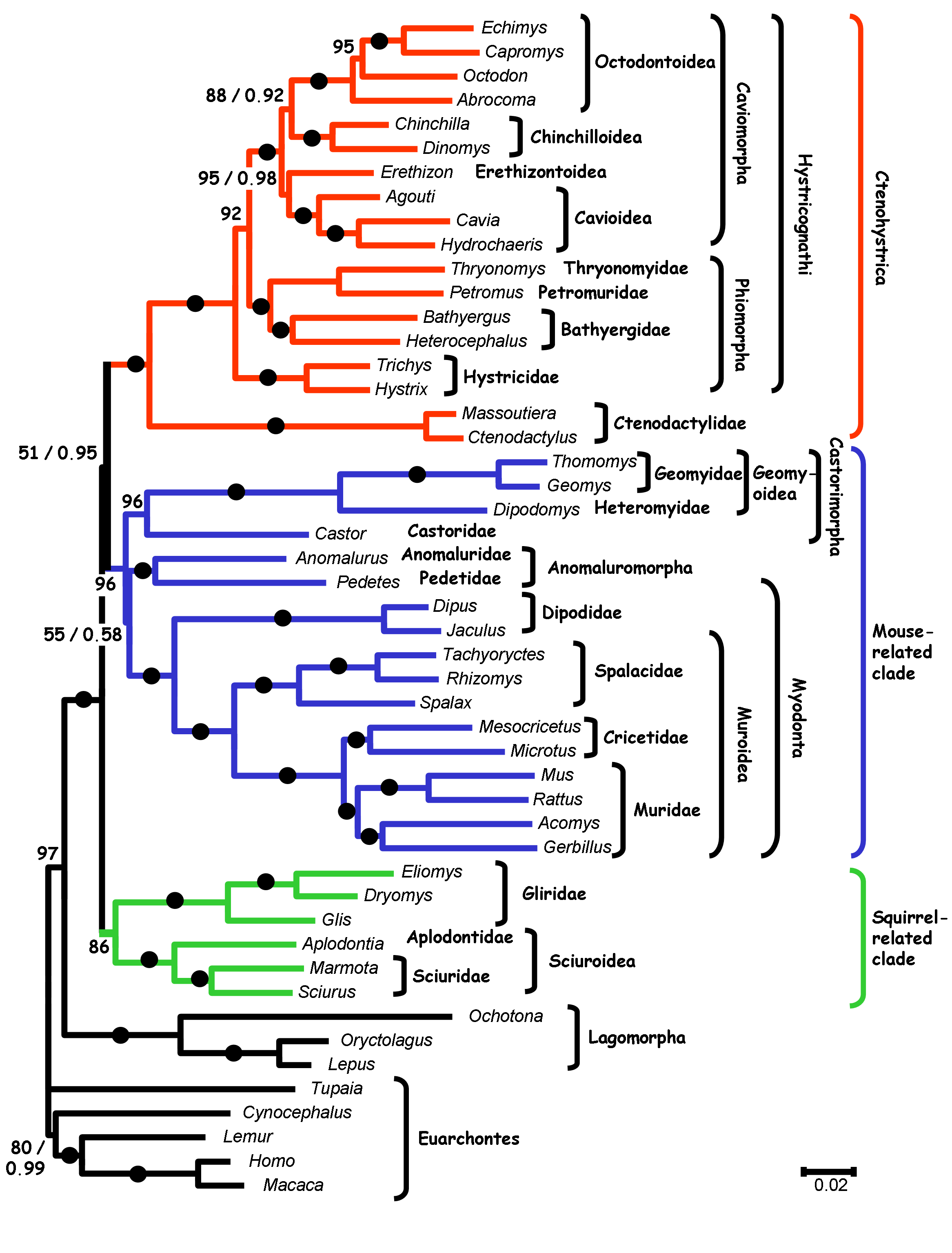 True rats and mice are rodents that constitute part of the subfamily Murinae in the family Muridae. The Old World house mouse is Mus musculus, the brown rat is Rattus norvegicus, so they are members of two different genera in that family. It is estimated that they split from a common ancestor 12-24 million years ago. Just to put that in perspective, the rodent lineage (including rats and mice) and the primate lineage (apes, monkeys, humans) diverged about 80 million years ago.

You can read an NIH News Release about the rat genome here, which is my source for these divergence times.

The names 'rat' and 'mouse' are also used in the names of many other, more distantly related, rodents such as mole rats and dormice.

Added later: Response to @rwst comment under the OP. Here is a relevant quotation from the NIH source that I cite above:

The new analysis also underscores the fact that while rats and mice look very similar to the human eye, there are significant genomic differences between the two types of rodents. For example, some aspects of genomic evolution in the rat appear to be accelerated when compared to the mouse. According to the new analysis, due to the unusually rapid expansion of selected gene families, rats possess some genes not found in the mouse, including genes involved in immunity, the production of pheromones (chemicals involved in sexual attraction), the breakdown of proteins and the detection and detoxification of chemicals.

Not the answer you're looking for? Browse other questions tagged genetics zoology dna or ask your own question.