How close genetically is the most human-like chimpanzee to the most chimp-like human?

Question: What is the smallest estimated inter-species genetic gap between humans and chimpanzees?

Edit: I changed the last point to base-pairs instead of genes. Most of the comments seem to suggest the population genetic variabilities are much, much smaller than the genetic distance between the populations. Visually, that looks something like this: 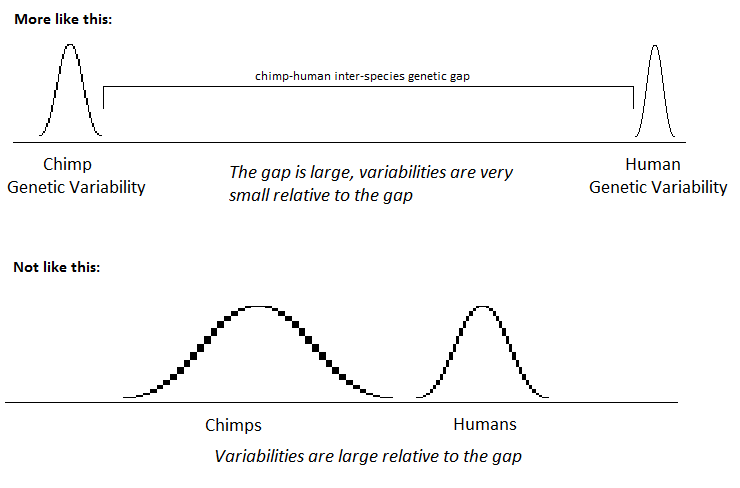 Is this a fairly accurate picture of the human-chimp genetic distance?

You may be interested in this 2005 Nature paper from the Chimpanzee Sequencing and Analysis Consortium: Initial sequence of the chimpanzee genome and comparison with the human genome. It breaks down the most common categories of genetic variation:

Single-nucleotide substitutions occur at a mean rate of 1.23% between copies of the human and chimpanzee genome, with 1.06% or less corresponding to fixed divergence between the species.

So if we accept their analysis, ~1% (it says "or less", but elsewhere in the paper they estimate a lower bound of ~0.96%) of the genome difference consists of fixed single-nucleotide differences between species.

Small insertions and deletions: On the basis of this analysis, we estimate that the human and chimpanzee genomes each contain 40–45 Mb of species-specific euchromatic sequence, and the indel differences between the genomes thus total ~90 Mb. This difference corresponds to ~3% of both genomes and dwarfs the 1.23% difference resulting from nucleotide substitutions; this confirms and extends several recent studies.

If you also want to know how far apart the two furthest humans are, as @Remi.b mentioned, the populations we've sequenced don't span the whole diversity of our species, but it is likely much smaller. You could look at some of the HapMap or Human Genome Diversity Project papers. For reference, when Watson's genome was sequenced, they reported around 0.1% of the sequence to be different from the reference genome, but that isn't a particularly diverse comparison.

You may also be interested in this paper comparing the human, chimpanzee, and bonobo genomes: http://www.nature.com/nature/journal/v486/n7404/full/nature11128.html.

However, there is one aspect that has not been discussed here which I think is very important for your considerations: trans-species polymorphisms (TSP). In the first part of my answer I was careful to always pronounce that major differences can be observed genome-wide, but genomes have a mosaic structure. When you look at specific parts of the genome, i.e. genes or haplotypes, these major differences do not hold and TSP are a very interesting special case of that. TSP are basically just gene variants, i.e. alleles, that are shared between species. This means that individuals between species might have the same variant, but individuals from the respective same species might have other variants. In simple terms this can be seen as individuals between species are more closely related at a given gene locus than individuals within species. Shared polymorphisms between species can in principal be caused by three mechanisms: (i) Genetic admixture and introgression, (ii) molecular convergence and (iii) TSP by either incomplete lineage sorting or splits in the lineage of alleles that predates the split of the species and both alleles are maintained in both species [Těšický and Vinkler (2015)]. This figure from Těšický and Vinkler (2015) shows the three mechanisms (see the green genealogy for an incompletely sorted lineage and the red genealogy for a lineage with an early allele lineage split). 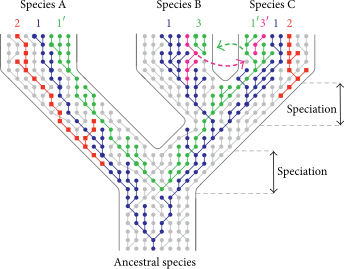 The first two are fairly unlikely in our case, even though there is some evidence that admixture between humans and chimpanzees happened after the initial lineages split [Patterson et al. (2006)]. Incomplete lineage sorting or early splits in the allele lineage, i.e. the TSP variants are identical by descent, can be seen as TSP in a narrow sense. And this type of TSP has been described between humans and chimpanzees especially for immune-related regions (see Azevedo et al. (2015) for a review) that are under long-term balancing selection. You can think of this as a selective pressure that is fairly constant in time, acting on different species over a wide geographical range, and triggering a similar selective response in the species involved. Given that, it makes sense that the candidate genes are immune-related as most likely that selective pressure is mediated by pathogens. Azevedo et al. (2015) also note that maintenance of TSP variants by balancing selection is most likely mediated by heterozygote advantage or frequency-dependent selection - both make sense in a pathogen co-evolution scenario. So far, the number of reported TSP loci is really low (really just below a dozen or so), and there might be two reasons for this that are not mutually exclusive: First and obvious, there might be very few TSP. Second, these loci are very, very difficult to detect (as you want to exclude loci that are identical-by-state due to e.g. recurrent mutation) and we might simply not yet have the tools and power to find most of them.

To draw a bottom-line and come back to your question, I would suggest that your inter-species genetic gap model needs a minor modification. Even though the general picture seems to fit, i.e. there is a significantly larger difference in variation between species than within species, there also is overlap in the far tails between chimpanzees and present-day humans. These overlapping variants are not identical-by-state, i.e. due to random effects or recurrent mutations, but are signatures of polymorphisms in the ancestral population of chimpanzees and humans that are still maintained independently in both the split lineages.

In contrast to chimpanzees, gorillas have been found to possess ONLY blood type B.

Now you can use some kind of statistic tool often used to determine genetic distance within species, such as the Fixation index on the genes regulating the AB0 blood system.

You could in principle do the same procedure on all genes that Chimpanzees and humans shares but the allele frequencies differ and try to find who has the least genetic distance to the present day chimpanzee population.

According to a study referenced here such areas in the genome are found in genes relating to fighting off diseases, where you might have an evolutionary advantage if you have a different allele than people around you that catches a disease because your allele makes you immune.

A genome-wide analysis searching for evidence of long-lived balancing selection -- where the evolutionary process acts not to select the single best adaptation but to maintain genetic variation in a population -- has uncovered at least six regions of the genome where humans and chimpanzees share the same combination of genetic variants.

10
What is the closest species to humans in animal kingdom?
1
Genetically speaking, are dogs exactly similar to humans and chimps both?
5
Perplexing by the way of estimating the shared or different genes between humans and chimps
4
What's the percentage similarity between human individuals (and other primates) when comparing only exons?
3
How many possible human genotypes are there that produce distinct phenotypes?
2
Is there a measure of human genetic variation, where human genetic variation can differ more than 1%?
7
What is the criterion for genetic similarity among siblings and humans in general?
1
Why do humans share over 99% of their genomes?
2
Are coding DNA and invariant DNA independent as subsets of the human genome?