What is a topological domain?

I found this definition on Wikipedia, but I didn't quit undestand it :

Can anyone explain it more, and give examples if it's possible ?

TADs were initially discovered by computing contact probabilities between regions of the genome using HiC (a chromosome conformation capture method, that try to provide an idea on how the genome is organized inside the nucleus by computing the probability of each contact to be located nearby another locus). People have found that instead of being random, some loci were in contact with some regions of the genome rather than the others, implying some form of functional significance.

In short: a TAD is a genomic region of increased contact probability. They are of functional relevance (for instance, Enhance-Promoter gene expression regulation occurs primarily within one TAD rather than between two (adjacent TADs).

Finally, the following picture (extracted from the latter publication) provides an example of two TADS: 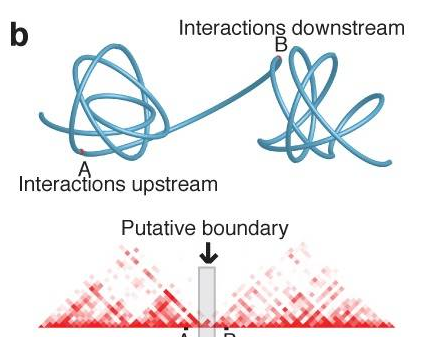 The bottom panel shows the contact probability: two regions of the genome appear to be isolated whereas they are nearby. They show significant self-interaction. One interpretation for that (top panel) is to imagine that the genome exhibit some reproducible condensation, explaining the increased contacts.

Topological aspects of DNA structure arise primarily from the fact that the two DNA strands are repeatedly intertwined. Untangling these two strands, which occurs in all major genetic processes may prove rather difficult. In the simplest case of a linear DNA in solution, untangling is possible due to the free rotation of the ends of the DNA. However, for all natural DNAs, free end rotation is either restricted or forbidden altogether. Consequently, untangling the two DNA strands becomes topologically impossible (Figure 1 illustrates this for the imaginary case of a circular DNA molecule where the two strands are tangled only once). 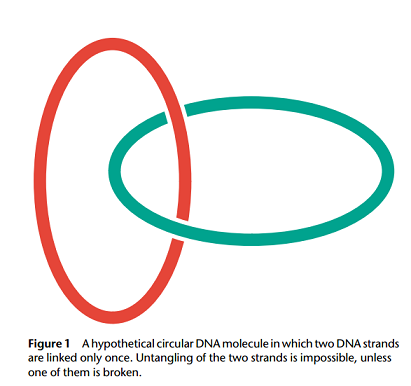 A DNA segment constrained so that the free rotation of its ends is impossible is called a topological domain (Figure 2). A canonical example of a topological domain is circular DNA, which is typical of bacteria, mitochondria, chloroplasts, many viruses, etc. In this case, there are obviously no DNA ends at all, since both DNA strands are covalently closed. Although eukaryotic chromosomes are linear overall, they consist of large DNA loops firmly attached to the nuclear matrix. These loops represent topological domains, i.e. they are equivalent to circular DNA topologically. The ends of linear DNA can also be affixed to the membrane, as has been shown for some viruses, making this DNA topologically closed. Finally, a stretch of DNA situated between the two massive protein bodies can also be considered a topological domain. 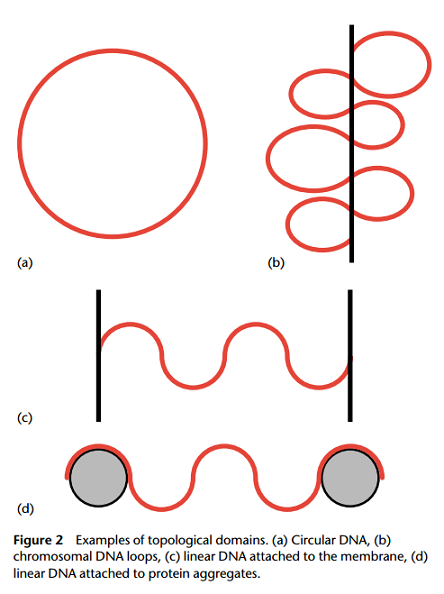 Not the answer you're looking for? Browse other questions tagged molecular-biology genomics supercoiling topology or ask your own question.

10
What is the difference between SOLiD, 454, and Illumina next-gen sequencing?
4
What is a DNA-binding domain?
1
What is a phospho-protein binding domain?
1
What is topological crossover?
1
How does the placement of it's motor domain affect the directionality of a motor protein?
2
Topological property of DNA
3
Why does underwinding create topological strain of DNA?
3
Is Sda a protein, or is it a protein domain of DnaA?
2
Questions about Cohesin - what does the ATPase domain do, and any suggested PDBs to look at?
1
Is the phrase "transmembrane segment" equivalent to the transmembrane domain of a protein?