What is the connectivity between on-center & off-center bipolar cells?

First off, the post is quite lengthy and contains various sub-questions. I will answer the first two questions in detail, but only after starting with an abstracted overview of photoreception in the retina. By the looks of it, your basic understanding of photoreceptors and secondary visual neurons is incorrect. Clearing the general neurophysiological workings of the retina up should get you on your way in understanding questions 3 - 6.

Synopsis of information flow in the retina: sensation of light
In Fig. 1 a schematic of the retina is shown. It basically consists of three layers. Layer one contains the photoreceptors, namely the rods and the cones. These primary sensory neurons absorb the light with photopigments and generate electrical signals in response to that. The photoreceptors, in turn connect to the second layer, namely bipolar cels, horizontal cells and amacrine cells. These cells are responsible for the center-surround structure of the receptive field of the last layer of cells (Fig. 2), namely the retinal ganglion cells in the front of the retina, whose axons pass across the surface of the retina and form the optic nerve (Kolb, 2017). 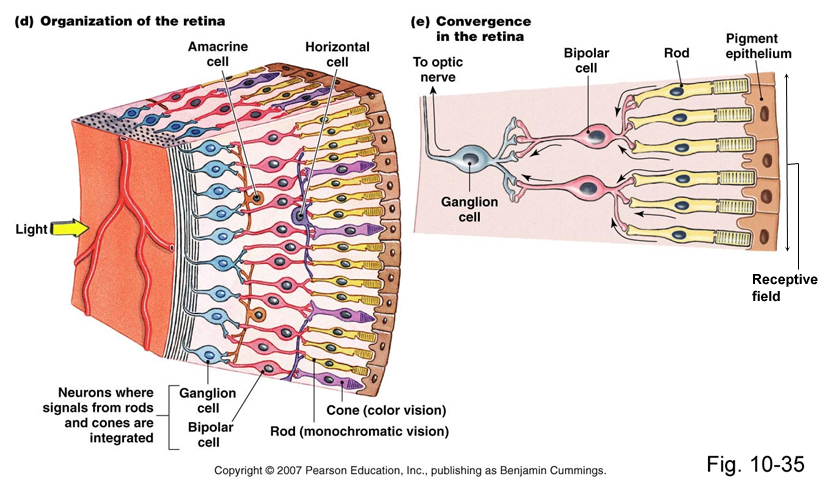 Note that there are no light-sensitive cells in the retina besides the rods and cones (barred the retinal melanopsin ganglion cells, but please forget that for the sake of simplicity). This one detail should basically clarify the sub-questions 3 - 6 in your post. The first two questions I will address next. 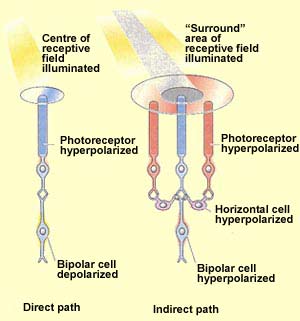 Fig. 2. ON and OFF center responses. source: McGill University

Regarding the retinal bipolar system and your first two questions: 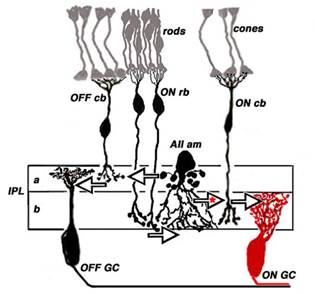 Not the answer you're looking for? Browse other questions tagged neuroscience neurophysiology vision eyes human-eye or ask your own question.