By just looking at an unlabeled picture, how do you know it is a protein?

I'm learning about proteins and need to understand this concept. What makes this colourful ball of squiggles identifiable? Why is it a protein, and not any other biomolecule (like DNA for example)? What are the colours showing? What are the variations in the shape of the image?

Basically, the question is: What is this image trying to tell me about this protein? 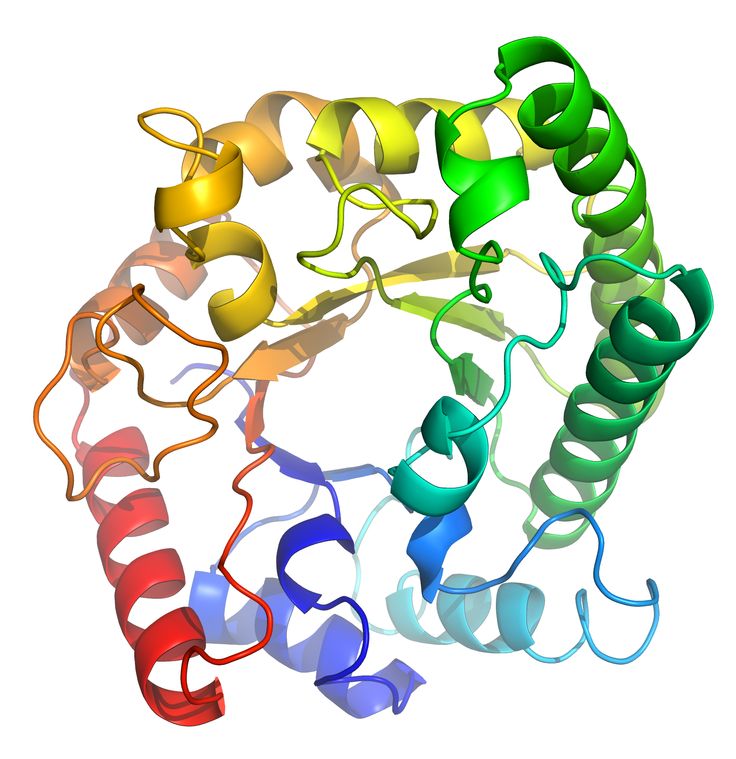 If you want to query this against other structures and see which protein it is, check out PhyreStorm. You'll need the PDB file, not just an image.

Even though this question has been answered (and the answer accepted), I want to add something regarding scientific language and convention.

Language in general is a means of communication which allows people to share ideas they have inside their minds. Scientific language is used for sharing scientific knowledge between people, and apart from verbal and written communication, it also uses drawings of all kinds to better illustrate complex ideas that are usually invisible to the naked eye (whether we are talking about molecules in chemistry, biological microsystems in biology, forces in physics, etc.).

The image in question represents the conventional way of portraying a protein structure, and this widely-accepted convention is characterized by certain colors and shapes, as stated in the above answer. I imagine that anyone seeing this kind of representation for the first time would not know immediately that this is a computer rendition of a protein, because no one knows what a single protein looks like before actually studying about it. But once you are told it is a representation of a protein, you accept it and "tag" it in your mind, so that next time you see it, you already know this is what a protein "should" look like.

And the more you study it, the more natural this language becomes for you.

5
First pass protein structure prediction
5
Can proteins move outside cells?
7
What makes a DNA sequence motif a DNA sequence motif?
2
How to identify active protein in a complex mixture?
1
How to use swiss-mod to predict the secondary structure and 3D structure of a protein?
5
What is protein folding and how is it relevant to disease?
1
Can DNA sequencing of food provide quantitatively the fraction of protein from chicken vs soy?
6
What happens when you tag a protease with its own degradation tag?