When chromosomal crossover occurs, two matched chromosomes swap matched sections of their chromosomes. My question is: how does the cell select where to to make the break on both chromosomes? Is it based on some attempt to match sequences on the two chromosomes, or purely on distance from the centromere? The mechanics of the former could be achieved by breaking the two strands of each chromosome at different places. The mechanics of the second is a simple walk from the centromere with a random(?) selection of where to cut.

The purpose of this question: if the process is based on distance from the centromere then it would provide an explanation the presence of junk DNA. Successful crossover requires that the number of functioning genes on the two chromosomes not be radically altered in quantity. A failed crossover would result in at least one of the gametes being non-viable, reducing fertility. If crossover is based on centromere distance then the location of genes becomes a factor in the success of a crossover, erecting a fitness barrier between populations with radically different gene placement, even if gene content is identical.

If this is a question without an answer, currently, one way to address it would be to try to cross breed knockout mice that don't have junk DNA with ordinary mice that do. If the fertility of the cross breeding is significantly lower than than knockout with knockout and normal with normal, or if the cross breeds are less fecund, then that would provide evidence for position based crossovers, and a function for junk DNA in the crossover process.

How does the cell select where to to make the break on both chromosomes?

There are proteins that direct the selection of a site where a double strand break will be made on one chromatid.

Crossovers are not randomly distributed: The histone methyltransferase PRDM9 recruits the recombination machinery to genetically determined hotspots in the genome and each incipient crossover somehow inhibits formation of crossovers nearby, a phenomenon called crossover interference. Each chromosome bivalent, including the X-Y body in males, has at least one crossover and this is required for meiosis to proceed correctly. Credit; Reactome

Is it based on some attempt to match sequences on the two chromosomes, or purely on distance from the centromere?

The sequences are matched but not as you have assumed. Following the introduction of a double-strand break in one chromosome the regions around the break are processed (by proteins) and these processed ends invade the opposite chromatid. The formation of a Holliday junction follows, these are the "X" structures between strands in the image below, and they requires base-pairing; 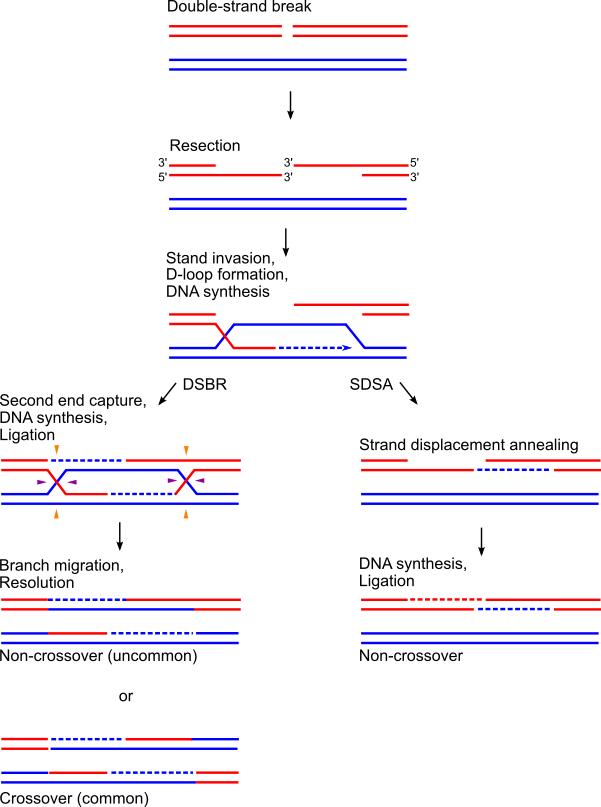 Just my take here. I have difficulty envisioning a mechanism that would insure the "walking" distance from the centromere was the same on both chromatids. How would that be coordinated? Since the chromatids are not in continual contact their entire length, this would entail two "walkers" that somehow coordinated their steps.

Furthermore, there is a lot of truly "junk DNA" between genes. By truly junk, I exclude the non-gene DNA portions we haven't fully documented the function of but which have uses that require their conservation. But there is a significant portion of DNA that is not conserved (which provides the basis for RFLP analysis in DNA fingerprinting). This means that, while the nucleotide lengths within genes and other important regions may be identical between homologous chromatids, the length of segments in between is not guarenteed to be so. An error of "walking" just one extra base within a gene would result in a frame-shift mutation likely rendering that allele useless.

I think there must some local exposure of the base pairs in some areas of contact between chromatids for chiasmata to form. This would also seem necessary simply for the chromatids to recognize their homologues.

Not the answer you're looking for? Browse other questions tagged biochemistry meiosis or ask your own question.

3
Doesn't meiosis form two pairs of similar cells and two pairs of opposite cells?
1
At what point, when connected, do DNA strands become a helix?
2
Why does chromosome inversion happen?
1
How do biologists determine the parents of a child
7
Polyploidy, or why plants of different species can produce fertile offspring hybrids more frequently than animals?
2
Is there random assortment in metaphase II?