Is there such thing as "half-life" of dopamine?

Is there any time estimate of how quickly the brain thinks that neurotransmitter has "fulfilled its purpose" and is to be re-uptaken? Or is this process completely random?

Thank you for your input!

DAT acts as a symporter, using the Na+ and Cl- gradients to generate the energy required to transport DA back in the cytosol.

The mechanism of reuptake has been investigated in vitro allowing the description of a model for DA reuptake by DAT.

In particular, from the abstract of this paper: A multisubstrate mechanism of striatal dopamine uptake and its inhibition by cocaine. - McElvain and Schenk, Biochem Pharmacol., 1992

Dopamine uptake was found to be first order in dopamine with a Vmax of 582 pmol/sec/g wet weight and a Km of 1.2 μM. The results of experiments in which choline and isethionate were substituted for Na+ and Cl−, respectively, suggested that the uptake process is second order in Na+ and first order in Cl−. Multisubstrate analyses of the initial velocities of uptake over the concentration range of 0.025 to 1.5 μM dopamine suggested that the mechanism of binding of dopamine to the uptake carrier is a partially random, sequential mechanism where dopamine or Na+ binds first with the uptake carrier and Cl− binds last.

A transport scheme is reported in: Dopamine Neuronal Transport Kinetics and Effects of Amphetamine

Scheme 1 is a kinetic scheme for a simple carrier adapted from that of Stein (1986) for the DAT. The subscripts o and i represent the outside and inside, respectively, of a DA neuron. Scheme 2 describes a possible mechanism for the cotransport of another species. All symbols are as in scheme 1 except that A corresponds to amphetamine.

This scheme describes transport as a series of steps: the competition between binding and dissociation of the substrate to the transporter on the extracellular side, a similar process on the cytoplasmic side, and an equilibrium between the unoccupied transporter facing toward the extracellular or cytoplasmic side. The driving force for inward transport arises from the cotransport of Na1 and Cl2 as well as the membrane potential difference (Stein, 1986; Sonders et al., 1997). Biochemical (Krueger, 1990) and electrophysiological (Sonders et al.,1997) studies have established that DA transport is accompanied by transport of at least two Na1 ions and one Cl2 ion and that DA transport can be bidirectional in isolated preparations.

The half life of dopamine in the extracellular space is of the order of 200 milliseconds.

In Figure 1 of this paper the authors present values for the half-life (τ) of dopamine elimination from extracellular space in the caudate nucleus and prefrontal cortex of mice as:

Apparently this is because dopamine is usually inactivated when the presynaptic cell takes it back up using the dopamine transporter, but in the prefrontal cortex uptake is instead via a lower affinity norepinephrine transporter on neighbouring neurones. Thus the value of 200 milliseconds seen in the caudate nucleus is probably more typical.

This is an attempt to illustrate how a system like this behaves kinetically, to help Alex visualise it. The model shown below contains external dopamine which can bind reversibly to a receptor. The unbound dopamine is subject to irreversible reuptake.

I built a quick simulation using Copasi. I haven't made any attempt to refine the parameters to fit the information in my previous answer - I'm just trying to illustrate qualitatively how the three different pools of dopamine (free external, bound external, internalised) behave in this kind of system. As @nico says, there is no question of extracting the receptor-bound dopamine - it will dissociate as the free dopamine concentration falls due to reuptake. 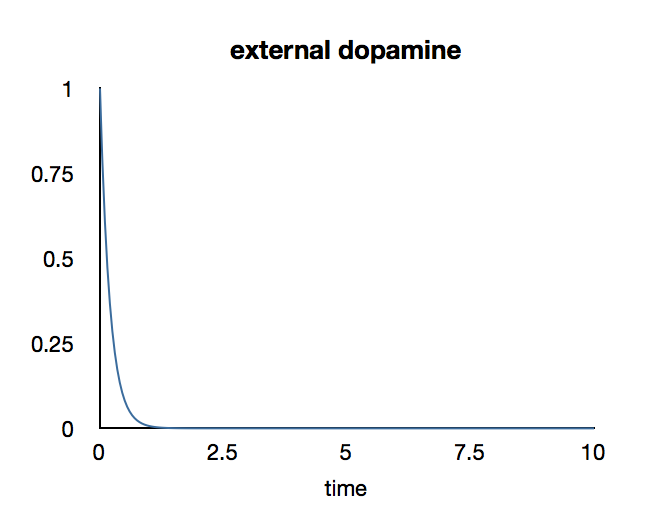 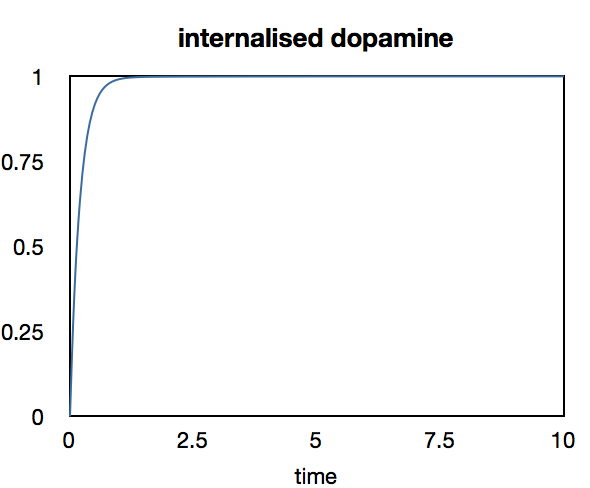 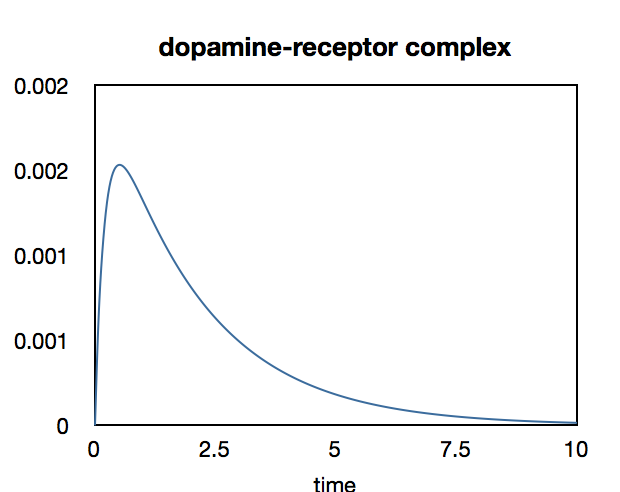 Not the answer you're looking for? Browse other questions tagged human-biology neuroscience neurotransmitter or ask your own question.

7
What is meant by "neurotransmitters flooding the brain"?

7
Is there such thing as a generic "metabolic type"?
2
Are there any neurotransmitters that trigger all neurons?
1
Inverse of dopamine reuptake inhibitor?
5
Can neurotransmitter concentrations in the synaptic cleft add up if there are several impulses in quick succession?
1
Half-life and production rate of ion channels
1
Does orgasm cause a dopamine crash?
3
İrreversible dopamine antagonist vs. Dopamine agonist
1
Is there an 'opposite' neurotransmitter to dopamine?