Do the two catalytic cores of DNA polymerase III operate in the same direction?

This diagram is from Molecular Cell Biology by Lodish, 2000 which states:

The other core-polymerase molecule, which elongates the lagging strand, moves with its β-subunit clamp in the direction opposite to that of the fork movement. 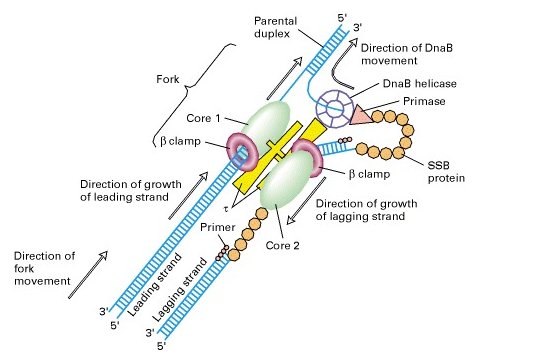 Again the images provided in Principle of genetics by Simmons, 2015 and Cell Biology by Karp, indicate that the catalytic cores are directed in the same direction. The following diagram is from former book.

Which one is correct and why(please provide citations)?

The DNA polymerase-III holoenzyme moves in one direction (along the fork). One of the DNA polymerases works on the lagging strand but the enzyme is oriented in the same direction as the one that is working on the leading strand. For details see this review (it is old but this fact is also old enough).

The second diagram shown in your question is an accurate representation of what happens. This, statement is confusing (and misleading):

The other core-polymerase molecule, which elongates the lagging strand, moves with its β-subunit clamp in the direction opposite to that of the fork movement.

Both polymerases move in the same direction but elongate DNA in opposite directions. The opposite elongation direction, as shown in the second figure, is facilitated by looping of the lagging strand.

You can simply google "DNA polymerase-III holoenzyme" and you'll get many sources that will corroborate this.

Not the answer you're looking for? Browse other questions tagged genetics molecular-biology molecular-genetics or ask your own question.