Can the concentration of a kinase be used to identify its substrate? 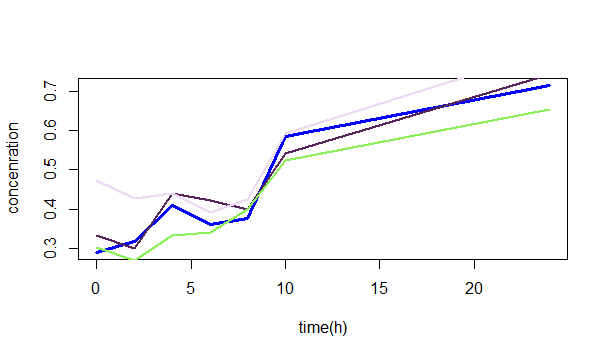 the blue line is the kinase and the other lines are proteins found in the dataset. I know there could be postive or negative feedback which has effect on the concentation of these proteins.So my question is could the lines shown here be a possible substrate?

The concentration of a kinase is completely independent of the concentration of the substrate, and vice versa. In a typical kinase cascade (such as the Ras→Raf→MEK→Erk pathway), signal transduction is generally amplified with each successive step. A relative small population of one kinase (like Raf) phosphorylates orders of magnitude more of its substrates (like MEK1/2), which in turn phosphorylate orders of magnitude more p44/42 MAPK (Erk1/2) molecules. These then phosphorylate transcription factors like c-Myc which translocate to the nucleus and affect the expression of target genes. Over time, protein levels inside the cell are changed, including the levels of the various components of the pathway or their inhibitors (such as phosphatases, components of the protein degradation machinery like ubiquitin ligases, etc.), allowing for regulation of the signal.

Therefore, for any given kinase at any given time post-stimulation, such as with a growth factor, the concentration and phosphorylation state of its substrate(s) can vary tremendously. For example, in the classical NK-κB pathway, activated by TNFα, one of the main substrates of the IKKα/IKKβ kinase complex is the inhibitor IκBα, which upon phosphorylation is rapidly ubiquitinated and degraded by the proteasome. However, one of the first target genes of the activated NF-κB p65/p50 transcription factor dimer is Ikba itself, which negatively regulates activation of the pathway.

I don't know exactly what information your data set contains, so I can't comment too much on your results. However, just graphing substrate concentrations that correspond to kinase concentrations at various time points will only give you one piece of information - that some substrates have grossly similar concentrations to the kinase - which means nothing. All that is is confirmation bias - you've decided on your result, then picked the data that confirm it. I bet if you were to graph the concentrations of direct substrates along with your kinase, you would find no relationship whatsoever, because as I've described above, there is none biologically.

Not the answer you're looking for? Browse other questions tagged bioinformatics proteins data phosphorylation or ask your own question.

6
Can concentration of a protein be determined from a gel quantitatively (rough estimation)?
9
How well does the radius of a tree correlate with its age?
2
Can Nanodiscs be used to study membrane energetics?
1
Mass Spectrometry (proteomics): How isotopes can be used to to determine charge of the peaks?
2
Am I entitled to the latlong coordinates of all specimens used in a species revision paper?