Are MHC Proteins the Most Polymorphic Human Proteins Known?

There is a paragraph titled "MHC Proteins Are the Most Polymorphic Human Proteins Known" in the "Molecular Biology of the Cell" by Alberts et al. 6th ed. 2014.

But someone has recently told me that it is not the case making an example of a set of genes helping to identify persons in forensic medicine. (I didn't remember the genes.) Is it true?

Are MHC proteins the most polymorphic human proteins known?

Yes. There are many MHC (MHC in humans is called HLA) genes. The classical loci — Class I A, B, and C, and Class II DP, DQ, and DR — are the most polymorphic.

Here's a table from a 2002 article which clearly shows the number of polymorphisms. It's no contest. 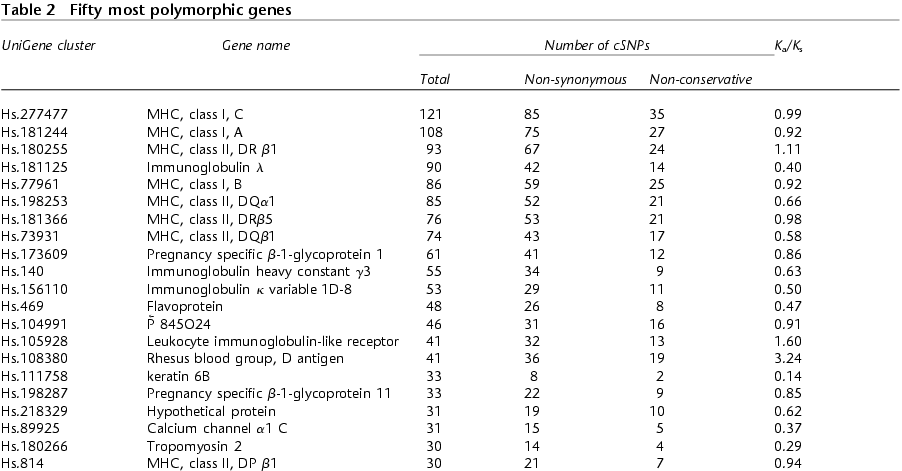 It's worth me pointing out that those numbers are wildly out of date. The IPD-IMGT/HLA can provide full lists of known HLA alleles, but the exact numbers are in the tens of thousands: 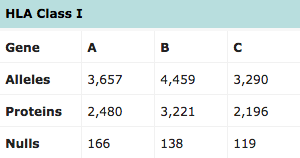 The person you spoke with was probably referring to sequences called microsatellites. These are small regions that are polymorphic and quite variable between individuals, and using a number of these together can be useful for genetic fingerprinting, but each individual microsatellite will not be as polymorphic as HLA class I A, for example.

Not the answer you're looking for? Browse other questions tagged proteins immunology human-genetics mhc or ask your own question.

6
Question about the expression of MHC
1
Conserved proteins are non immunogenic
8
How close genetically is the most human-like chimpanzee to the most chimp-like human?
4
Are the human genes' promoters all known?
1
Database of known human proteins
2
Which proteins are most sensitive to electric fields?
1
Which proteins are part of the most different protein complexes?