I saw this figure in this atricle: 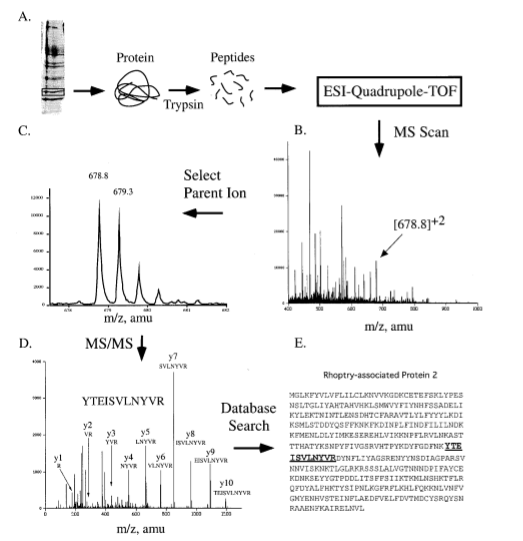 It's a really nice representation of what happens when using MS/MS. However I was wondering how this works when there are more proteins present in the gel spot. How would you be able to select the parent ion(because there are multiple of them)?

Liquid chromatography (LC) allows the peptides from a complex sample to be fed into the mass spectrometer over time. The bottom half of the image shows an MS spectrum from a single precursor scan and the machine is programmed to select the three most intense peaks (parent ions or precursor ions) from this scan for MS/MS (MS2). 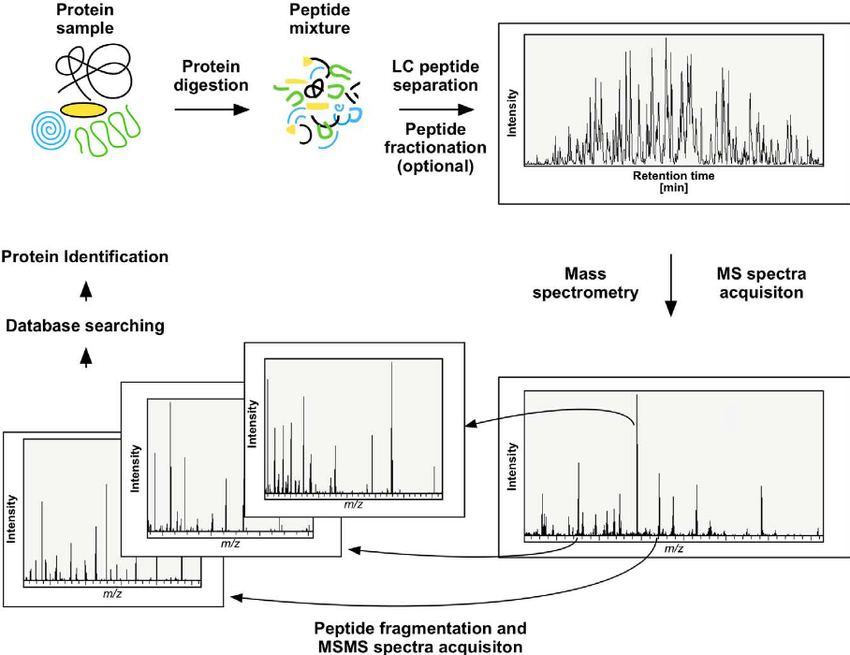 This process is repeated throughout the LC-MS/MS run and programs usually include exclusion criteria where a parent ion is ignored for 30 - 90 seconds once it has been scanned 1 - 2 times. Usually the machine will also ignore singly charged parent ions as many of these ions will be inorganic contaminants and you want the machine to be busy with peptides.

Efficient use of machine time is critical to getting good coverage of the proteins in the sample. Proteins that are small create fewer peptides that are amenable to sequencing so these can be missed. Also those proteins that are less abundant may produce peptides that stay below the selection criteria. Good chromatography and efficient use of machine time are critical to getting good results and even in good conditions most peptides will not be subjected to MS2 sequencing. This estimates that of 100 000 peptides with only 16% were 'sequenced'. This explains why proteomics labs are speed freaks, and has driven the development of faster machines. The ~ 1 hour yeast proteome paper demonstrates the 'work' that the newer machines can get through;

Not the answer you're looking for? Browse other questions tagged proteins mass-spectrometry mass-spec protein-identification or ask your own question.

1
Mass Spectrometry (proteomics): How isotopes can be used to to determine charge of the peaks?