The effect of pH on catalase

Why does catalase still produce oxygen when mixed with 1 mL of 0.1M NaOH (pH 13), but not when mixed with 1 mL of 0.1M HCl (pH 1)? Catalase's ideal from what ive researched is 7. In other words, since both are on opposite side of the pH scale and equally distant from catalase's ideal, why does the acid mixture stop working, but the base still function, even if a little slower? Why did the catalase denature after the acid, but not the base? Thanks for any help, I'm pretty curious

The pH profile of an enzyme is not necessarily symmetrical. As random examples, see Figure 7 here, or Figure 5b here. Or if you have access, a pH profile for Magnaporthe grisea catalase can be seen in Figure 7 of http://dx.doi.org/10.1042/BJ20081478

The reasons for this go back to why enzymes are pH dependent in the first place. One of the major reasons for a pH dependence is that key catalytic residues become (de)protonated as the pH changes. But different residues have different effects and different pKas, so you need to look at the sum of all their effects.

Imagine that a key catalytic residue must be in a deprotonated form, and has a pKas of 4.0. At any pH above about 5.0, it's all in the deprotonated form, so that residue should work. Any pH below about 3.0 and the enzyme is completely dead.

But an enzyme might have more than one residue that's pH sensitive. So now imagine that there's another residue which in the protonated form helps the reaction, but isn't as critical to catalysis such that the deprotonated still has residual activity. For the sake of argument let's say this residue has a pKa of 9.0.

Now imagine a third pH sensitive residue with a pKa of 6.5, but it's even more removed from the active site and has an even lower effect on catalysis (for example, it's a remote electrostatic effect based on the polarization of the transition state).

What would the pH profile for this enzyme look like? Here's an example: 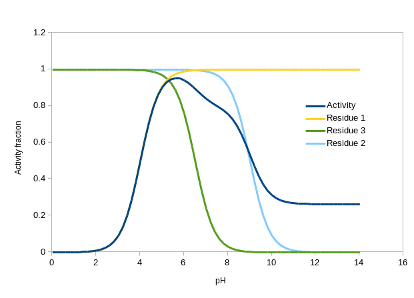 "Activity" is the estimated total activity, and Residue 1/2/3 are the fractions of "active" form of each residue. - Diagram was made using the Henderson–Hasselbalch equation to determine the fraction of "active" states of each individual residue, and then assuming that the inactive forms are 0%, 80%, and 33% the activity of the fully active form for the pKa 4.0, 6.5, and 9.0 residues, respectively.

Note that the maximal activity occurs at about pH 5.7, but the activity drops off asymmetrically - the enzyme is much more sensitive to low pH than high pH.

A similar thing happens with natural enzymes, except that they may have many more residues which have minor contributions. They also may have $\ce{H+}$ and $\ce{OH-}$ playing a role as reactants (thus affecting the intrinsic reaction rate), and pH may play other effects, such a denaturing the enzyme. That's what leads to the complex pH profiles: multiple small effects all adding together.

Not the answer you're looking for? Browse other questions tagged biochemistry proteins enzymes ph or ask your own question.

16
What effect has changing pH and salt concentration on protein complexes?
5
Why does pH have an effect on enzymes?
4
How do catalase and other antioxidants neutralize free radicals?
3
How do CO₂ and carbonic acid (H₂CO₃) work in buffering the blood?
7
Why is it often the case that an enzyme is favorable only towards one direction of a reaction and not both directions?
2
Optimum pH of Catalase
14
Origin of the biochemical term, Pi (inorganic phosphate)
5
How can facultative anaerobes exist without catalase?