Why are Mendelian mutations considered rare?

I was reading the Wikipedia articles about genome-wide association studies (GWAS) and whole exome sequencing.

As I understand, GWAS is used to identify most common SNPs that are proved to be associated with a disease/disorder. On the other hand there is an article about whole exome sequencing method where it said that it is more sensitive to identify Mendelian mutations in contrast with the SNP genotyping methods used in GWAS. 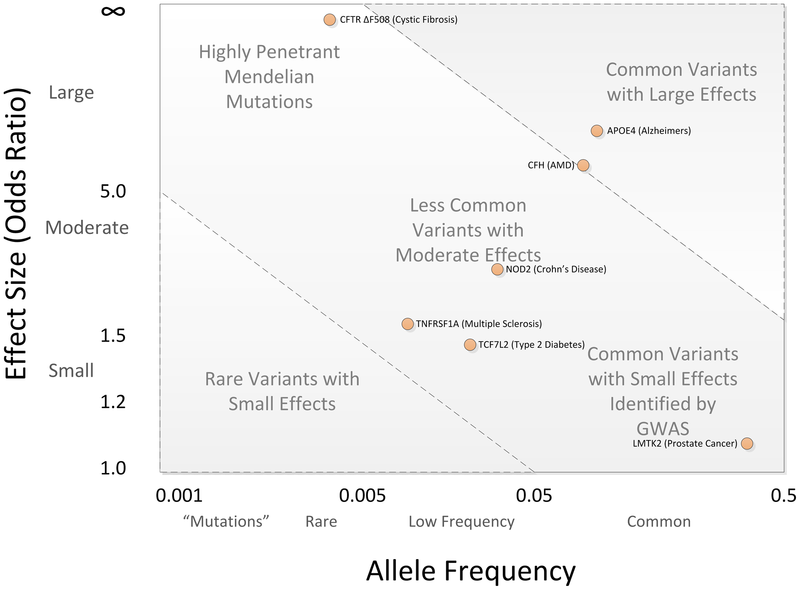 I will focus more on the question of rarity, which the comments have not addressed. Recall that natural selection is operating on the human population. Because of this, bad mutations of large effect (disease mutations such as CFTR in your figure) are very rare, because selection is removing them at some rate from the population (people with cystic fibrosis are unfortunately very sick and are not as fertile as healthy people), whereas mutations with very little effect are not subject to much selection. Paper one and paper two are reviews describing the population genetics in more detail.

As suggested by commenters, Mendelian mutations are so named because they are single loci of large effect controlling traits (approximately). Common variants, by this logic, must have very little phenotypic effect, because they are not purged by natural selection (assuming that they are deleterious, or disease-causing).

Not the answer you're looking for? Browse other questions tagged mutations gwas or ask your own question.

15
Looking for a cancer drug target database to guide sequencing of patient tumor DNA
1
A question on exclusion of study participants for an Exome genotyping array
7
GWAS: why is replication in another cohort so crucial?
2
Why are de novo genetic mutations usually NOT inherited?
5
Are the changes required to produce genetically manipulated organisms (GMOS) considered to be mutations
4
GWAS terminology "Tag" vs "Lead" vs "Index" SNP
0
Whether de novo mutation can be inherited or not?
0
How many people need to have the same mutation of a gene in order for that gene to be seen as a feasible candidate for a disease?