What is the difference between a species tree, a gene tree and a phylogenetic tree?

I have found websites and text books disagreeing over this. For example,

It is well known that a phylogenetic tree (gene tree) constructed from DNA sequences for a genetic locus does not necessarily agree with the tree that represents the actual evolutionary pathway of the species involved (species tree)...

Although the second source, being from a journal, would seem to be more reliable, my original thought was that phylogenetic trees do show the evolutionary relationships between species and thus are species trees as opposed to gene trees.

Any clarification on the issue would be much appreciated.

If you compute a phylogenetic tree, from genome-wide DNA, then you are computing a species tree (although some sister lineages might not perfectly fit the definition of species). If the phylogenetic tree is computed from data coming from a single gene, then we are talking of gene tree.

Why would a gene tree not match a species tree?

But a gene tree is not just a species tree with fewer data. There are reasons for why a gene tree may not match a gene tree. Genes may duplicate within a given genome. The two duplicated genes are free to evolve independently since the split. All descendants lineages will then inherit these two genes but if you map the two different copies of the gene (red and green below) in two sister clade, they will be much more different then the two same copies (say the green copy) in two distantly related species. Here is a picture to show that 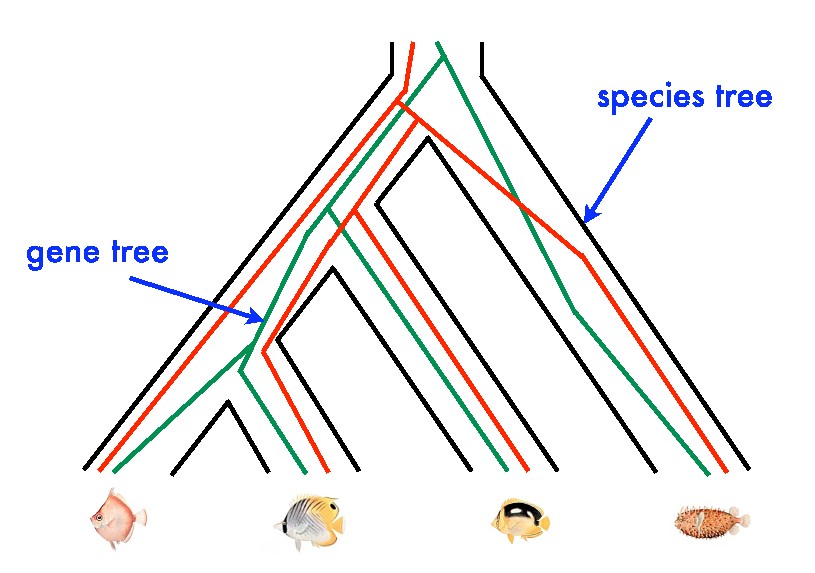 Below is a gene tree and the associated species at the tips. Take time to make sense of what is going on on the picture.

What is a species tree exactly?

One could call a species tree as some kind of average tree among all gene trees.

Not the answer you're looking for? Browse other questions tagged evolution phylogenetics species speciation trees or ask your own question.