How do absorbance readings indicate diauxic growth of bacteria?

How is growth rate an indicator of carbohydrate use?

Carbohydrates are the carbon and energy source available for the microbes, and their assimilation is correlated to biomass production. The relationship between microbial growth rates in an aqueous environment and the concentration of a limiting nutrient or carbon source is given by the Monod equation 1 : $$ \mu = \mu_{max} \frac{[S]}{K_M + [S]} $$

This relation is linear when the substrate concentration is lower than the constant $K_M$, this is when it is not saturating.

Now, when the culture is in the log phase of growth biomass ($X$) can be described with the simple growth equation: $$ \frac{dX}{dt} = \mu X $$ where $\mu$ is the growth rate of the culture, and it can be interpreted as the biomass production speed. So the fastest carbohydrate use is, the highest the growth rate will be.

This is explained by the Beer-Lambert law. Simply put: the absorbance ($A$) of an entity is proportional to its concentration ($c$) - all else being equal. $$ A = \varepsilon \ell c $$ where $\varepsilon$ is the molar attenuation coefficient or absorptivity of the attenuating species, $\ell$ is the optical path length in cm, and $c$ is the concentration of the attenuating species. So, the changes in the concentration of your bacterial population (its growth) are reflected in an increase in its absorbance.

If you find a lower absorbance value at time $t+1$ in comparison to time $t$, yes it could mean that the bacterial cell number at time $t+1$ is lower than at time $t$. However, we know neither the protocol you have been following, nor the values you have been obtaining, so there could be other explanations, such as error of measurement.

Do the presence of substrates affect the absorbance reading in other words do carbohydrates have any turbidity?

Yes, molecules in the medium can impact your Optical Density (OD) values. However, that would only be true if these molecules absorb light at the wavelength you are using to measure the absorbance (eg $600$ nm). This is why you should always blank with some filtered medium (or at least with some fresh medium).

Turbidity (measured as absorbance) is direct indicator of numerical density of microbes in culture. The more microbe-cells: the more light is diffuse-reflected and scattered in the path of light; so the less amount light reach the photo-sensor given at colorimeter/ photometer.

Growth rate is an indicator of nutrient use. If certain nutrient is difficult to metabolize for that bacteria; the growth rate would decrease. So turbidity will not increase in that rate. Visit wikipedia that says 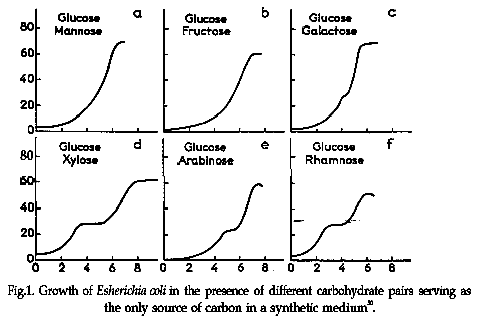 Not the answer you're looking for? Browse other questions tagged microbiology glucose growth-media or ask your own question.

12
Is there a favoured mathematical model of bacterial growth?
2
Why when measuring turbidity do we use the minimum wavelength?