Which is the reference 16S rRNA?

Recently, I've stumbled upon a fact, which hasn't bothered me for many years. The fact is that all universal 16S primers are written as "[FR][0-9]+" (in regex notation), that is they have a position with respect to a reference. I've read through many papers, wherein these primers were introduced, and most of the time the authors say nothing but "E. coli 16S". Anyway, in one case I've found that it is in fact the reference K12 E. coli. But the problem is that it has 7 distinct rRNA operons: rrnA, rrnB, rrnC, rrnD, rrnE, rrnF, rrnG. Do you have a reference showing a particular operon used for the 16S position notation?

As you correctly point out, designing an optimal primer pair for 16S-rRNA sequencing is a tricky affair because even the less-variable regions are not same between different strains and species. Sambo et al (2018) have even developed a bioinformatics software for optimal design of primers for 16S-rRNA sequencing for multiple bacteria.

We propose here a computational method for optimizing the choice of primer sets, based on multi-objective optimization, which simultaneously: 1) maximizes efficiency and specificity of target amplification; 2) maximizes the number of different bacterial 16S sequences matched by at least one primer; 3) minimizes the differences in the number of primers matching each bacterial 16S sequence. Our algorithm can be applied to any desired amplicon length without affecting computational performance.

There is diversity in the 16S-rRNA genes within the same species i.e. the different copies are not exact duplicates (Větrovský & Baldrian, 2013). 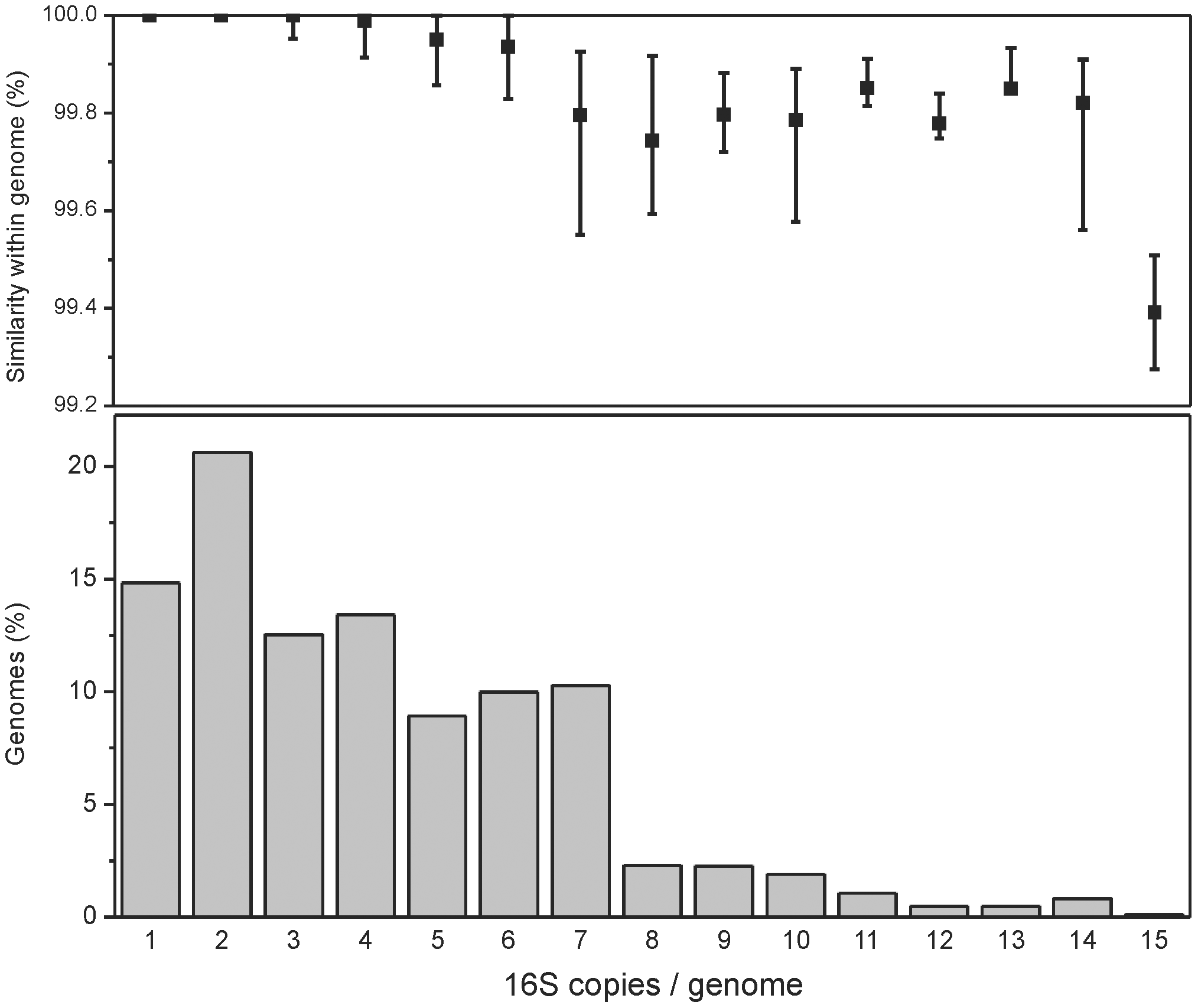 Interestingly, the different rRNA operons in E.coli have different promoters and are even differentially expressed during stress conditions (Kurylo et al., 2018).

However, Kitahara et al. (2012) found that 16S-rRNA genes isolated from soil samples, in place of the original E.coli gene, could support its growth. In other words E.coli is highly robust to mutations in its 16S-rRNA.

After counterselection, ∼200 clones of KT103-derivatives (carrying pRB103 whose 16S rRNA gene was substituted with foreign genes) were obtained, from which 33 nonredundant 16S rRNA genes (A01–H03) were identified. Through multiple alignment of E. coli 16S rRNA and our metagenomically retrieved 16S rRNA sequences, it was found that at least 628 (40.7%) of the 1,542 nucleotides were variable, indicating marked mutational robustness of the 16S rRNA. Strikingly, the functional 16S rRNA sequences (except A10 and F02, which were 99.0% identical to E. coli 16S rRNA) obtained in this study showed only 80.9–89.3% identity to E. coli 16S rRNA, which was well below the value reported thus far (Proteus vulgaris 16S rRNA, 94% identity to E. coli 16S rRNA)

But the problem is that it has 7 distinct rRNA operons: rrnA, rrnB, rrnC, rrnD, rrnE, rrnF, rrnG. Do you have a reference showing a particular operon used for the 16S position notation?

I don't think any one of them is considered the reference. The complete E.coli 16S-rRNA sequence reported in NCBI seems to consider a "consensus" of different reported sequences:

[5], [7] contain updated sequence data for the original work by the same laboratory [4]. There were too many discrepancies between [4] and [5], [7] to list each revision in our sites table. The sequence shown is from [7]. [4], [5], [7] point to a number of cistron heterogeneities. There is uncertainty, however, with regard to assigning these various heterogeneities to specific cistrons. The RNA method used by [4], [5], [7] gives the average of all the cistrons present in the cell [7]. The heterogeneities are classified by their relative proportions into major, minor and undetermined species. The sequence shown corresponds to the major species. The heterogeneities were annotated as variations in the sites table. It is not known which of the residues 'c' (base 633) or 'a' (base 641) undergoes a deletion, giving rise to the minor component 'atctg'. [7] suggests the existence of one or two mutated cistrons among the known seven cistrons of ribosomal RNA. With the exception of a single base deletion, this sequence is identical to the current 16S rDNA sequence for the E.coli rRNB gene.

The NCBI page also lists different polymorphisms and base modifications in the 16S-rRNA within and between different strains/"species".

NCBI has several partial sequences as well. When I checked for P.aeruginosa and B.subtilis, I could find only one or two complete sequences (rest were partial). Moreover, each entry indicated the strain that it was obtained from. Therefore I assume there is no single reference sequence.

I guess that people do consider the different variants while doing phylogenetic analysis (or simply just look for conserved "signature" sequences for a given species). I am sure that there are computational algorithms for doing the classification in an optimal manner (see Chatellier et al., 2014). Since, I don't have an expertise in this area I cannot say anything conclusively about the routine practice. In fact there is still ongoing research in improving the analysis (for example, Yang et al., 2016 and Sambo et al., 2018).

Not the answer you're looking for? Browse other questions tagged genetics bioinformatics microbiology sequence-analysis primer or ask your own question.

4
Reference sequence for defining single nucleotide polymorphisms
15
Why reference genome is a reference?
1
Are there any major noticeable limitations to genome sequence compression methods that use reference templates?
1
How is 16s rRNA used to identify unknown bacteria?
3
BLAST 16s rDNA: Everything alligns to Bacillus sp
1
16S rRNA and 5S rRNA datasets
1
What tool can I use to align multiple protein sequences to one reference sequence?