What is the smallest difference in light wavelength that the human eye can detect?

Is there a lower limit to the difference in wavelength (colour) our eyes can detect? If so, is this consistent between individuals? Are there any other traits correlated with precise colour vision?

The eye really on can sense 3 colors, or to be more precise it only has three types color sensitive each of which detects a large range of wavelengths with no way to distinguish between them within the same cone. We only determine color by the different levels of activation between the different cone cells. This means we need a lot of light to see color and our ability to detect differences in color really depend greatly on where on the visible spectrum that color falls. 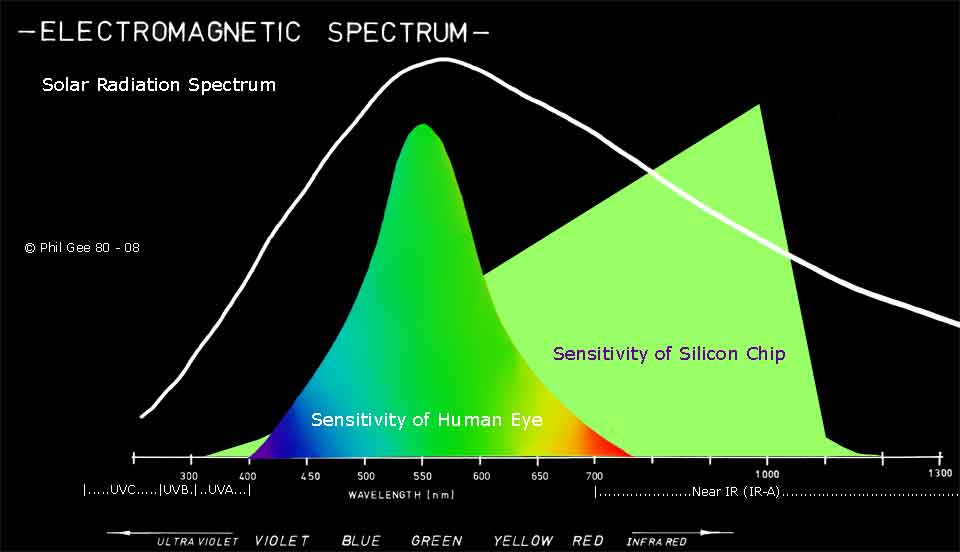 As for more precise color vision. The greater the number of types of cones cells the more color sensitive the eye ,birds and reptiles can see far more colors than use becasue they have 4 types of color sensitive cells as opposed to the human 3. More widely spaces base colors will give greater sensitivity. This is why even among trichromats human color vision is poor becasue two of our base colors are close together and overlap greatly. That is because humans (and primates) are secondarily trichromats, gaining a third base color from a recent mutation. wiki on the subject 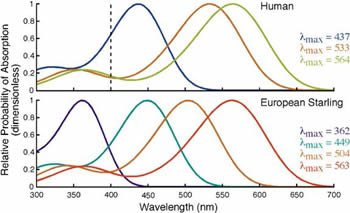 Is there a lower limit to the difference in wavelength (colour) our eyes can detect?

The average human can detect differences in color as low a 1 nm depending on color subject to:

The following graph shows the minimum and maximum discrimination values at various frequencies: 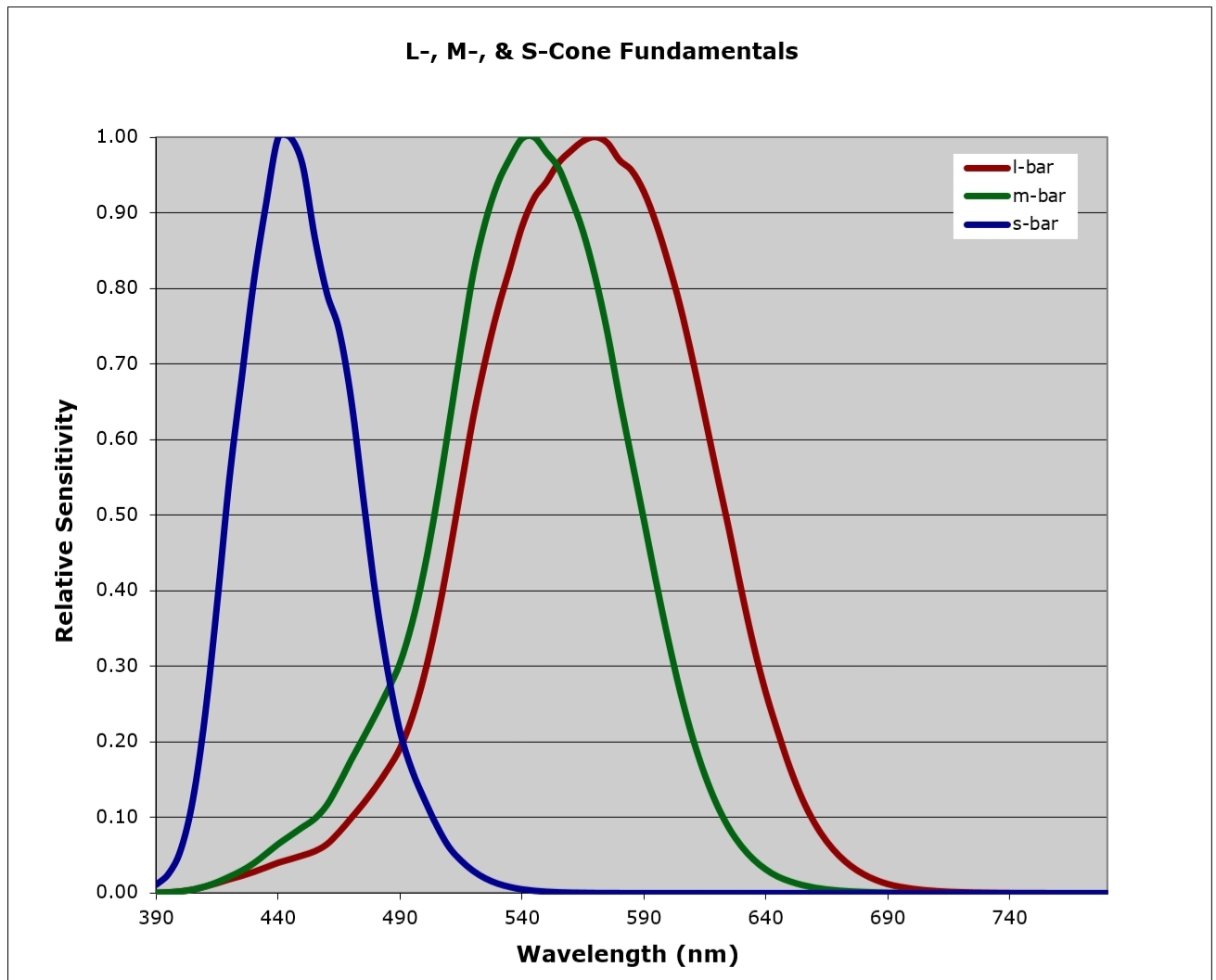 If so, is this consistent between individuals?

Results for 52 individuals, based on heterochromatic step by step brightness matching; "The visibility of radiant energy" Gibson, Tyndall and Kasson (1923) 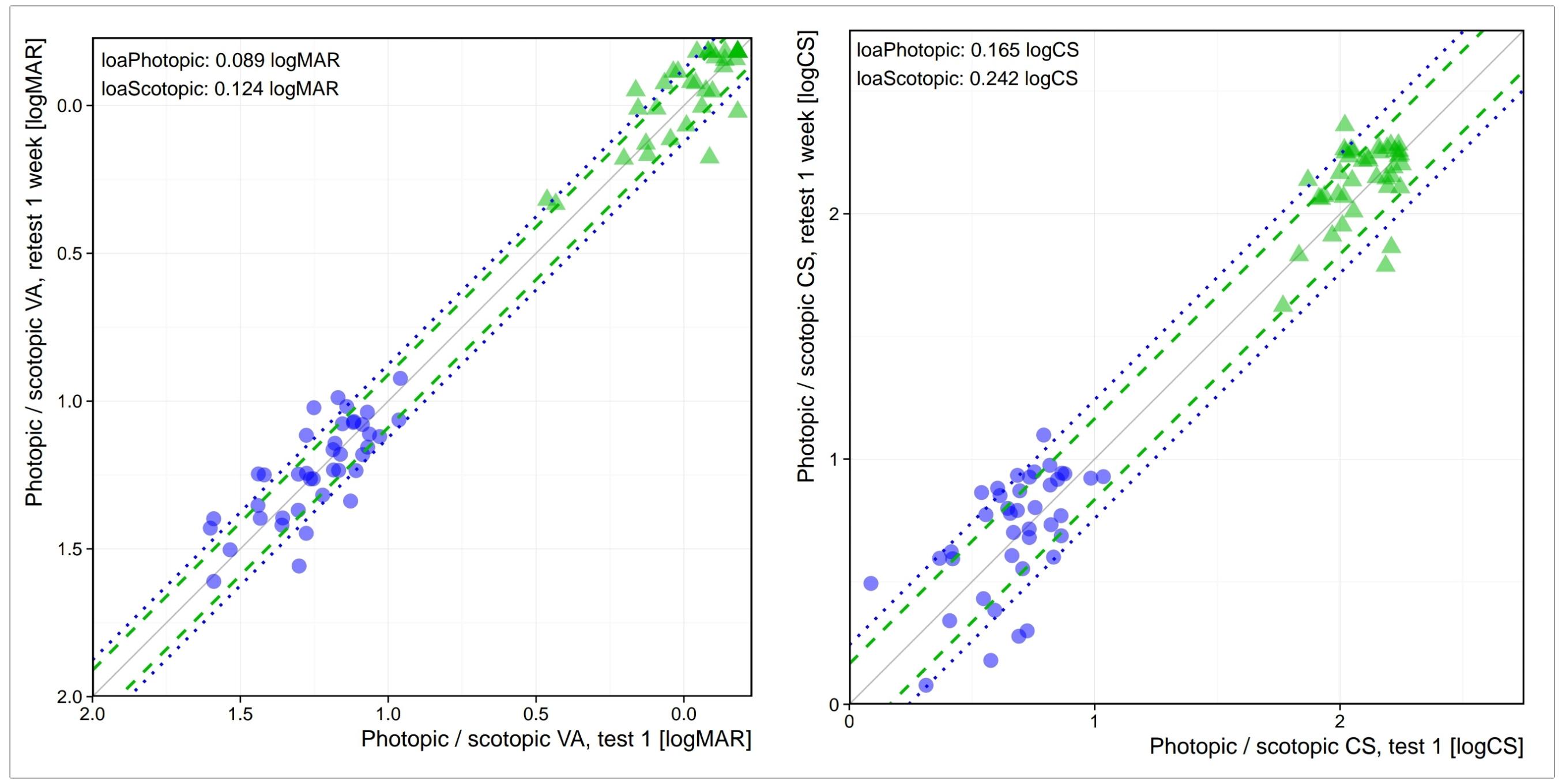 Fig 1. Test-retest assessment. Four data sets are depicted: Visual acuity (left panel) and contrast sensitivity (right panel) at photopic luminance (green triangles, near top left and at scotopic luminance (blue discs, near bottom left). Result of the first test on the abscissa, second test on the ordinate. Grey 45°- line is the identity line, next to it the ± limits of agreement (photopic, dashed; scotopic, dotted). Visual acuity in logMAR units have an inverted scale, and contrast sensitivity is in logCSWeber units, meaning that better performance corresponds to the top right for both graphs. As expected, photopic measures of VA or CS are markedly better than scotopic ones. The 95% limits of agreement are remarkably similar. All in all, there is no marked deviation from a normal distribution, and the reliability is good for the range measured.

Are there any other traits correlated with precise colour vision?

For your third question, above the one question per post limit, I'll offer these links (I may come back to this as time permits):

Briefly: Precise color perception is not only the capability of the eye but the training of the brain (seeing different similar colors and having a need to differentiate between them) and the teaching of the vocabulary, the learning of the differences, and learned application of this in practice.

I am unable to answer the first question.

But yes, there is an upper ad lower limit to what frequency of light the human eye can detect. This is why you cannot see microwaves, infra-red, ultraviolet or gamma rays. Given the light cones humans have, the limits is consistent within the species. However given that the exact number of each light cone (red, blue, green) varies between individuals, sensitivity to a particular colour will vary between individuals. So both of us can see blue. But my blue maybe bluer than yours.

First, it depends a lot of the brightness. And also, of the part of the spectrum: we have high accuracy between red-green (since 2 of the cone have close sensitiveness), and very few in deep red and violet (were mostly a single cone reacts).

As always, you do have differences between individuals. Small ones, + big ones related to the variations in cone peak sensitiveness (or missing or extra cone).

In addition, it seems that there is a cultural factor: some cultures are more trained to pay attention to differences within blues, or reds, or greys.

About 2 nm wavelength difference. The human eye can detect about 150 different hues in a rainbow, which for us consists of a visible light 380-700nm. About 300nm/150hues = 2nm per smallest detectable difference between two hues. I guess that's the answer you were looking for?

122
Is there a reason why human eyesight and plants make use of the same wavelength of light?
8
Does every human eye see the same visible spectrum?
16
Why can't the human eye focus blue light?
5
Can other animals see black differently?
7
What is the function of the human eye white?
8
Can one eye affect the other eye's low-light adaption?
8
Are there animal species that sense infrared light with their eyes?
2
What photoreceptors are necessary to permit infrared vision?
1
What is the smallest visual unit perceptible to the human eye, like a pixel? (esp. in visual static)